Use this board for general non-cycling-related chat, or to introduce yourself to the forum.
Post Reply
64 posts

Here's the other items in my toolbox. A machine vise which started life as a steel block. Roughed out with a shaping machine before milling, filing, drilling, tapping, and a lot of scraping of the bed when it was assembled. The screw is a square cut thread and everything is in imperial units, no metrication here in 1971. And my last exhibit is a cold chisel forged from a length of hexagon bar.
All these tools get used frequently. We didn't make any of the toolmakers clamps, dice, callipers etc that the craft apprentices made.
Do apprenticeship's like these still exist? They would have cost a fortune at the time. We may well need this sort of training if we have to return all those industries we outsourced to save a few bob. 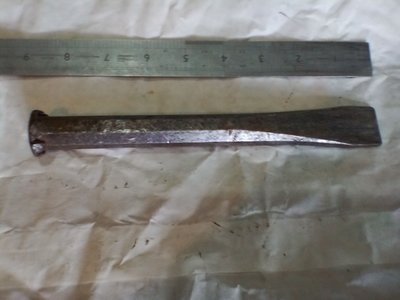 Apprenticeships still exist in Germany, people even go travelling for three years to learn a trade (woodwork, metalwork), for three years and a day they may not go within 50 km of their home 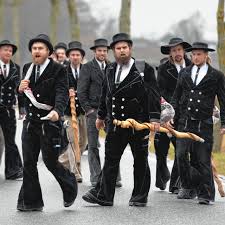 Someone had it about right: 'in Germany people learn too much, in the US they learn too little
Entertainer, kidult, curmudgeon
Cycling-of course, but it is far better on a Gillott
We love safety cameras, we hate bullies
Top

We sharpened our drills with a bench grinder by hand. No gloves either!
The angle was scribed on the bed, and you had to taper the cut to get the right rake.

Next piece, was done on a lathe, plus hand fitting and filing.
Other than the lathe to get the bore correct, the rest was done by file and getting it accurate with a micrometer and a set-square ....... like the two previous pieces.

The slider will go in either way up, back to front, and any which way. It slides back and forth without a fag paper being able to fit in!
TBH, the wear in the things has taken its toll over the years with playing with them.

Forgot to put the ruler next to it.
It's 2.5inches long. 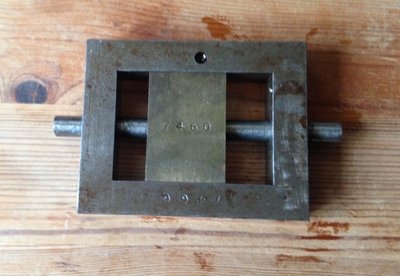 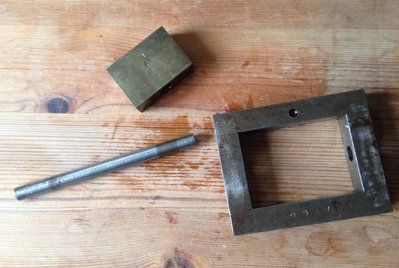 I have been on quite a few big ships on business and was always impressed by the scope of the machine shops on board. As was observed absolutely essential to help make running repairs at sea. Worth nothing without the engineering skills of the ships crew.

I started my apprenticeship on the 3rd September 1962 on £4.00 a week.
Did what appears to be similar test pieces such as cube in block. Hammered and chiselled the cube out of a round bar etc. Soon learned to keep my thumb out of the way of the hammer.

Gradually moved on to lathes, shaper, miller, surface grinder etc. Made a machine vice but don't know what happened to that. Always struggled filing a flat surface. There's no such thing as a tailwind.
It's either a headwind, or you're going well.
Top

Brilliant!
It's amazing how we are all so skilled from our apprenticeships.
Skills for life.

cycleruk wrote:I started my apprenticeship on the 3rd September 1962 on £4.00 a week.

Started in 1959 on 50 Bob a week. After board and lodging I was left with 5 Bob. I did get MOD luncheon vouchers though

Hi all, I stand in awe at the skilled work on display here, my efforts were poor in comparison

.
But they clearly display the need for such practises, rigour & attention to detail.
A chum of mine told me years ago, but within the computerized engineering era, of the then mindset at work.
He was employed maintaining an engineering facility at a Lancashire University.
To cut to the chase he said when students were set the task of making working prototypes of hardware they would draw the ideas out, then proceed to do a CNC Programme to make the finished article? They never thought to actually do the work using manually controlled machinery???????
They invariably thought along maximum out-put lines, how sad is that? TTFN MM
Top

My background is electronics. Nevertheless, as an apprentoid I had to spend some time in various departments which included the craft apprentices metal working area. I still have some test pieces such as tap and die holders. A week on lathes, a week on mills, a couple on hand tools. None of which was any particular use to me in my professional life, but what was a big bonus was that it gave me an appreciation for what those mechy people were doing.

Added - I still cannot saw or file in a straight line, but then my mechy friends cannot make a decent solder joint with a soldering iron.
Last edited by tatanab on 14 Jun 2020, 9:42am, edited 1 time in total.
Top

Really interesting to learn about your respective training, Mick / Al et al - thanks for the posts - good to know that her majesty's boats and planes were in such good hands... working on modern bicycles must seem fairly straightforward for you both, in comparison.
ttfn, Simon in Easton
(currently enjoying a Moulton TSR & a nano Brompton...)
Top

CNC machines didnt exist when I served my apprenticeship. The nearest we got was setting up a capstan lathe and I do seem to remember a machine with a plugboard controlling some sort of program. It would be time consuming and inefficient to write a CNC program to make a one off. Error prone too, but part of an essential learning curve for contemporary apprentices. The whole point of the high quality workshop training for Mechanical Engineers is that if you are going to design things you must have a good understanding of manufacturing processes so that you can design components to minimise the expense of producing them.

There is a whole world of making things from metal outside the scope of a precision engineering workshop. The smithy, welders and fabricators, artists, jewelers, silversmiths, sculptors etc. All very creative and fascinating.

tatanab wrote:Added - I still cannot saw or file in a straight line, but then my mechy friends cannot make a decent solder joint with a soldering iron.

I can do both.

I had my own section, with a couple of staff, maintaining radars and communication equipment depending what job I was in at the time.

By then, I was in charge of a whole sub group of the department, plus I was departmental co-ordinator representing the department at planning meetings for whole-ship tasks. I looked after the pastoral care of a dozen junior ratings, as well as being in charge of sonars, radars, comms, internal comms, planned maintenance and anything else the boss or the command wanted me to do.

To be frank, latterly, I didn't enjoy the job, and often reminiscing my earlier days with my own bit of kit to nurse ...............rather than being the nurse-maid of personnel. Handed in my notice and left the RN in April 1996.
Mick F. Cornwall
Top

As a Scablifter, we were always taught that Naval Engineering was a two-day course...

Day 1 - Things that don't move, but should

LIberally apply WD40 and hit it with a hammer

Day 2 Things that move, but shouldn't

Wrap in Pussers Gaffer tape until it can't move

27 years Mick, some of them in grave danger as a picket. Did that put you on max pension?

Including my apprenticeship I did 30 years working for others and a further 16 working for myself in a nice little business I created. That was the best bit!

Just came across this test piece and, after 57 years, still in use frequently as part of hobby and general home jobs :- 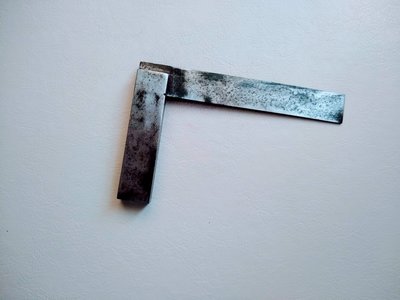 I was very fortunate working for a large firm in that we spent some time in various departments - electrical, mechanical, drawing office. I am an "Instrument Artificer" by trade but within the job we did everything from plumbing to computers. We were sent to "technical college" one day and one night a week in the hope of attaining some form of educational certificate. That didn't go down well with me as I much preferred working on the tools. Learning about electric motors, fluorescent lighting, power factors had no bearing on what we actually did. Anyway, 37 years until early retirement did me well and a couple of jobs to take me up to state pension age. Thank you very much.

I do not envy the youngsters of today as there appears to be excessive scholastic pressure on them and 'jobs for life' have virtually disappeared.
There's no such thing as a tailwind.
It's either a headwind, or you're going well.
Top
Post Reply
64 posts