Use this board for general non-cycling-related chat, or to introduce yourself to the forum.
Post Reply
191 posts

windmiller wrote:The above is nothing more than a long lament from those that have serious issues with democracy.

If it's about the recent General Election can I ask if you think that winning entitles the Government to do anything it likes?

Radical idea, what if there was a new agreement to override and improve on the GFA in the process making it work in the existing reality not the reality when it was originally agreed? Just bouncing ideas around.

As an aside of relevance. Does anyone know when the last EU treaty was signed compared to when the GFA was signed? Something like 2007 to 1997 iirc.
Top

windmiller wrote:The above is nothing more than a long lament from those that have serious issues with democracy.

If it's about the recent General Election can I ask if you think that winning entitles the Government to do anything it likes?

Unfortunately the reality is that when considering international law they can and do. I think I saw a link on another forum to a research paper on infractions of international law by EU nations. It seems the UK isn't alone by some way. Domestic overrides international rather more than I reckon people realise.

On another topic there's information out there on eu rules/ laws on state aid (another hitch in a Brexit agreement) and how many breaches each nation commits. Germany and France for example are serial offenders with uk one of the most law abiding nations. Hypocrisy is common among sovereign nations.
Top

Thanks... but my question was about whether "democracy" gives carte blanche to Governments.

For the UK the power to make treaties comes from the Crown not from any recognisable democratic process.

Then the short answer must be that it does because it has happened in democratic eu countries in the past. If it didn't then it wouldn't have happened so widely.

Of course my long answer posed a few ideas on top of that. about nations in the EU breaking their own, negotiated rules and laws. Afterall aren't Lisbon treaty and others international law defining how the eu functions only no country follows the results of EU functions completely. I'm sure you probably know more about the legality of state aid rules in the EU, for example, which have been widely broken over the years. Does that not count as breaking international law? Or is it that you're just bothered about the international laws related to Brexit? Any rain if true?
Top

Sainsbury's now completely explicit about the implications of the internal border:
https://www.irishnews.com/news/northernirelandnews/2020/11/07/news/brexit-may-hit-food-supplies-to-northern-ireland-sainsbury-s-warns-2122890/

"If we don’t get greater clarity on the Northern Irish situation then we will see a restriction on the ranges of products we can sell. This is not one or two products in stores I am talking about, it is a substantial number of products and quite key, everyday products too."

Meanwhile over at the unelected second chamber: 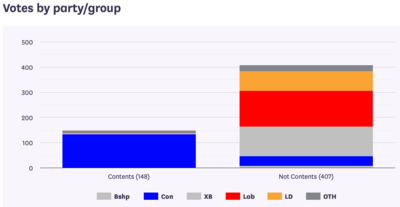 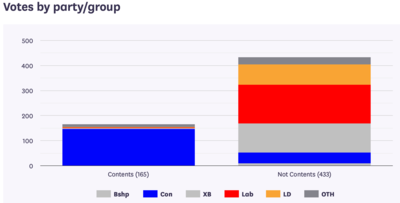 Tangled Metal wrote: Germany and France for example are serial offenders with uk one of the most law abiding nations. Hypocrisy is common among sovereign nations.

Or their companies are just serial litigators and/or the public authorities less likely to settle. Most ECJ cases are initiated by private parties, i.e. a company feeling it's lost out on some public funding or other. That makes it rather hard to compare actual numbers of infringements given differing rates of both legal actions being initiated and public bodies backing down & re-tendering or settling vs challenging all the way to the ECJ.

Jdsk wrote:Thanks... but my question was about whether "democracy" gives carte blanche to Governments.

For the UK the power to make treaties comes from the Crown not from any recognisable democratic process.

I don't think 'democracy' makes any difference, governments technically have carte blanche anyway. Technically is somewhat irrelevant though and it's the geopolitical consequences that matter far more. As far as those goes, bending minor rules occasionally isn't likely to net the same response as trying to scrap parts of an agreement the very same government not only agreed to just months earlier but also publicly sold it as an excellent deal whilst trying to negotiate another deal with the same group, numerous other deals with other countries and threatening a relatively significant treaty (GFA) that has reasonably heavy investment from the powerful USA who we're also hoping for a deal with. The only conclusions to draw from that is that our politicians are either deeply untrustworthy, or too stupid/lazy/arrogant to read the couple of hundred pages of agreement they're just about to sign and the idiot friendly briefings of the consequences of that agreement prepared by a doubtless weary and exasperated civil service.

True Carte blanche is only really an option if the country is a superpower, or a pariah that doesn't care.

And that's probably a constitutional clash in the making. The government thinks this is a manifesto commitment, the lords does not so will see no reason to back down.
Top

Letter from the HoC Justice Committee to the Attorney General:
https://committees.parliament.uk/publications/3545/documents/33905/default/