Use this board for general non-cycling-related chat, or to introduce yourself to the forum.
Post Reply
16 posts 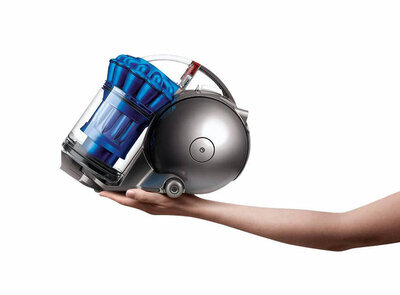 OK, so I was going to buy a new Dyson vacuum cleaner - one of the new ones with a so-called digital motor (I think they mean brushless) but when I realised they are three-times-and-climbing the price of my modest and ancient Henry, I changed tack. I bought a duff one off of fleabay and refurbed it myself

It's the DC49 and it's tiny! I'm so pleased with its form-factor - it'll sit on a sheet of A4 - that I'd like to buff up the shell - in particular, the dust collecting cylinder is cloudy - I imagine that it may be made of acrylic. What sort of products, home-made or otherwise, do folks use to clean and polish plastics. I've got Solvol Autosol and T Cut but wonder if they're a bit harsh? Someone down the pub said use vinegar-and-bicarbonate of soda, but you know what they're like down the pub...

For gentle abrasion of the surface I suggest toothpaste or liquid Brasso. Usual precautions.

For polish I suggest proprietary automotive stuff... I wish there was a DIY mix but I haven't found one as good.

Not Solvol. T-Cut will leave a residue if the surface has a texture Otherwise it’s fine. I would use furniture polish if it’s just a bit dull.
Current status report:
Back on two wheels in deepest Pastyland and loving every minute. Mission: to enjoy big, bad hills again.
Top

Woah, hold on there cowboy. Do you want to do it properly?

Here you go (this is a real thing

) It's something of a legendary thread in the 'detailing' community!

Do you want to do it properly?

...was hoping for a 'quick-fix' - don't want to spend more than, say, 5 minutes! Actually, I've just had a thought which is: no wonder the acrylic parts are cloudy - what's Dyson famous for? His 'cyclone'! So all the tiny little particles of grit whirl around & around gently rubbing the shine off the transparent plastic!! So there's certainly no point in spending any time trying to restore them to back to their original state, when they're only going to go back to milky again. You could say it was designed in!
ttfn, Simon in Easton
(currently enjoying a Moulton TSR & a nano Brompton...)
Top

We have 2 Dysons, a "Ball" and a "V10". Not impressed with the Ball but the V10 is good. Yes expensive but the wife likes it very much and that's all that matters.

( We traded in one of the original 2 wheel Dyson for the Ball and wished we had kept the original.)
As far as cleaning - damp cloth, brasso and furniture polish. Separate plastic bits can be washed in soapy water.
You'll never know if you don't try it.
Top

Some years ago I had a car with acrylic headlights which were becoming very cloudy.
I found a method on u-tube which entailed using very fine - I think about 1500 grit wet & dry emery paper - for deeper scratches use coarser grit and work towards finer. Then use cutting compound.
I tried it and it worked very well.
Top

Dyson products are cheap, plasticy ( a pejorative term) and made in a low cost country - making the retail price even more obscene than it used to be. I was at my local tip a little while ago, and was told by one of the chaps working there that he sees more Dysons dumped there than all other brands put together: The hepa filters that they have are a secret ("100% of the suction, 100% of the time" - difficult to achieve if you use such things) and never advertised, so these filters block, and the motors burn out. Bad enough if this was a cheap product. It is a mystery to most of us how someone making plastic crap can get so rich. But then you look at consumer behaviour, and how most people get rich. QED.
Top

It is a mystery to most of us how someone making plastic crap can get so rich. But then you look at consumer behaviour, and how most people get rich.

So that's why I bought it, for twenty quid, off of fleabay. Curiosity. Talking of design and relative values, it really is an astonishing product. The many plastic pieces come apart and re-assemble like some sort of three-dee jigsaw puzzle! The air-driven beater-bar on the head, in particular, is a triumph of clever implimentation. I have thoroughly enjoyed its restoration! But, comparing it to my old and still-working-perfectly Henry is interesting. Where everything on the Dyson is re-thought, cleverly re-designed, miniaturised and complicated, the equivalent on the Henry is simple, solid, large and robust. They're chalk and cheese! So, why bother?
I've had the Henry since I re-furbished my turn-of-the-century terraced cottage in inner-city Bristol and I dread to think of the sheer weight and volume of the rubble, plaster-dust and lord-know-what-all-else that Henry has sucked up, with & without bag, never missing a beat! The Dyson, pre-owned, shows signs of normal domestic use and abuse only, and had packed up. Its filters were clogged - probably not been cleaned after the first couple of months of enthusisatic ownership,, and its super-complex 'cyclone' - a work of art in itself, needed a complete strip, wash and rebuild. Not broken, but just abused enough to fail to work as intended. Side-by-side with the Henry, I can't help wondering why go to all the considerable effort to make the Dyson, when the simple, solid, boring old Henry does the same job, as well or better, for longer. Just half a day of the sort of abuse I applied to the Henry, month in month out, would have crippled the Dyson, I suspect...
Therein lies the secret of the consumer system - you work hard and you create a product that people want. You use clever marketing to make it sound unique & desirable. Upthread we read of a poster's missus, who made the purchase happen - that's the rationale in a nutshell! Henry works well enough, in a dull, uninspiring way, for £80-ish quid - yawn. But it hasn't got that sex appeal the Dyson has - you can't boast about owning Henry, can you?! That's what makes the Dyson "worth" £350!! (or twenty, in my case

I would not buy or use anything with the Dyson name on it.

The guy is a hypocrite full stop.

After they made his name and made him rich, he closed the factory in Malmesbury, a small market town with Dyson the only major manufacturer in the area and 800 people directly lost their jobs and that's not taking into account, all the other local businesses affected by the closure.

He instead moved production to Malaysia where the minimum wage, has just been increased to £1.04 an hour!

He has even recently moved his HQ to Singapore and that was after publicly campaigning for Brexit.

He can be classed alongside Jacob Rees-Mogg, Nigel Lawson etc – the leave elite who want Brexit for everyone else but themselves.

He is a rat leaving a sinking ship but the trouble is he was part of the crew that steered into the rocks in the first place.

Please don't get me wrong, I would not dream of telling anyone else what to do, but when a hypocrite like Dyson gets a mention then I feel obliged to speak my mind.

I find Brasso metal polish wadding very good at taking scratches out of plastic, and recently used it on old turntable lid

A browse of wiki suggests 65 jobs were lost, which have since been more than replaced by the development at Hullavington, within 5 miles.

Is the truth rather more nuanced than that?
Top

How's the cleaning and polishing going?

Really well, thanks - in the end, I used a solution of biological detergent to deal with all the built-up crud, it being largely of human origin, I imagine. There's so many different chemicals in these powders, including all sorts of stuff to improve the appearance of fabrics made out of plastic - I use bio-powder for all sort of difficult cleaning jobs - not for my clothes, though! The many pieces of the baby Dyson have all come up lovely (technical term, that...). As remarked, in the end I didn't bother with trying to restore the 'as-new' lustre to the translucent acrylic parts, deeming it a pointless exercise. Stubborn paint was removed with a so-called Magic Sponge.
One thing you chaps familar with electricity and its properties may be able to answer is this:
There's a piece that transfers the leccy from the two contact rings built-in to the cable retractor drum, to the motor. One component, hidden by some sort of insulation (pictured) is open - there's no continuity between the spade and the ring, in either direction. What is it and what is it for? I'm guessing it's to suppress noise, however, its profile, visible in the piccie, reminds me of an old-fashioned fuse - surely not?! 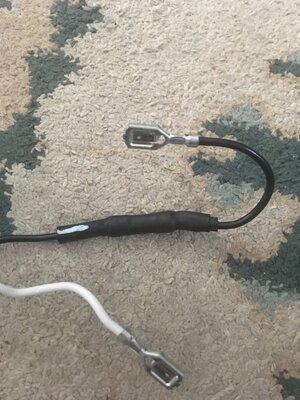 thingy in the middle of the +ive feed to the motor...

Just to balance a Henry with our Dyson V10.
Henry is mains powered, Dyson battery.
No need for an extension when doing the car etc but the battery does have to be re-charged.
A Henry as far as I know is just suction, our Dyson has rotary brushes as well as the other attachments.
Henry is heavy which is the main reason my wife likes the lightweight Dyson. Just lift it off the wall and vacuum up whatever. Dyson V10 a 1/3rd the weight of a Henry. (2.5Kg against 7.5kg.)
Henry's do have some advantages - Price, capacity, robustness, (do they suck up water ?) but the ones I have used I have not been impressed with.
So it's horses for courses and pays your money.

simonineaston wrote:One thing you chaps familar with electricity and its properties may be able to answer is this:
There's a piece that transfers the leccy from the two contact rings built-in to the cable retractor drum, to the motor. One component, hidden by some sort of insulation (pictured) is open - there's no continuity between the spade and the ring, in either direction. What is it and what is it for? I'm guessing it's to suppress noise, however, its profile, visible in the piccie, reminds me of an old-fashioned fuse - surely not?!IMG_1919.JPG

Maybe a thermal fuse? You could strip off the insulation

to have a look but then re-insulate it after. (heatshrink). I don't understand why there is no continuity unless it is a capacitor?
You'll never know if you don't try it.
Top
Post Reply
16 posts