Use this board for general non-cycling-related chat, or to introduce yourself to the forum.
Post Reply
33 posts

Sounds like a good idea. Some years ago I had to use a walking stick following an accident. Like most of these things it's black (a folding one), so I put alternate bands of red and white reflective scoth tape around it. Made it a lot easier on crossings, especially when waved in front of me when cars where approaching too fast as I crossed!
Brompton, Condor Heritage, creaky joints and thinning white (formerly grey) hair
""You know you're getting old when it's easier to ride a bike than to get on and off it" - quote from observant jogger !
Top

thirdcrank wrote:Re sustainability, anyone deciding to go for lights should opt for some sort of dynamo eg one of those jobbies you repeatedly squeeze but be aware, IME they don't last long.

I find it impossible to believe that anybody could credibly advance any sort of SMIDSY if they hit a pedestrian wearing H&S hi-viz.

I would have said it impossible that a Duke could credibly claim to have been dazzled by the sun in England when looking north in winter, but that happened and few questioned it. Heck, all sorts of things I would have found impossible have happened over the last five years!

Given that so many absurd driver excuses have been believed in the past, I don't see much reason for your confidence that something like "I thought they were a roadworker working on the verge so was surprised when they proceeded along the road" would be dismissed.

rmurphy195 wrote:Sounds like a good idea. Some years ago I had to use a walking stick following an accident. Like most of these things it's black (a folding one), so I put alternate bands of red and white reflective scoth tape around it. Made it a lot easier on crossings, especially when waved in front of me when cars where approaching too fast as I crossed!

Well, yes, because carrying a red and white stick means something! Highway Code Rule 207: "Particularly vulnerable pedestrians. These include: [...] deafblind people who may be carrying a white cane with a red band"

It's rather reassuring that drivers still respect this, but I suspect they may not if people abuse it!
MJR, mostly pedalling 3-speed roadsters. KL+West Norfolk BUG incl social easy rides http://www.klwnbug.co.uk
All the above is CC-By-SA and no other implied copyright license to Cycle magazine.
Top

Have you considered attaching lights to zimmer frames,wheelchairs etc.
Top

kwackers wrote:There's been a steady rise in the number of 'motorists' on the local social media groups complaining about walkers dressed in dark clothes (bear in mind the area is fairly well lit by streetlights).

It's fairly rare now to see dogs without lights and growing numbers of walkers have lights - in fact there's one lady I pass in a morning who's out walking and has front and back bicycle lights attached to her waistband!

Whilst I appreciate lights increase your personal safety I find it sad that they're required because car drivers can't drive to the conditions and then have the cheek to complain that they're expected to actually look.

I drive, I cycle and I walk, to an extent each of those modes of travel conflicts with the others and the important thing is for folk to get used to the idea of sharing space. Motorists aren’t particularly good at sharing space because they are quite objective driven (to complete their important or necessary journey within a particular time) and expect to feel no physical pain in the event of a collision. However, whilst they might drive too fast spare a thought for their difficulties too and try to help them out. Wide cars and narrow lanes aren’t a good match, light pollution is an issue and (regardless of light levels) it’s surprising how well pedestrians do merge into the background at times.

‘Wear something light at night’ used to be a road safety campaign slogan and whilst I might not always do it the comment is valid: make yourself readily visible to motorists and visible from whatever direction they happen to be approaching. Whilst it shouldn’t happen ‘sorry mate I didn’t see you’ does happen despite drivers acting sufficiently well to guide their vehicles along the carriageway, so take personal responsibly for your safety and for alerting other road users of your presence.

Having a light source is a good idea, well torches work for me in my particular circumstances. I like a small hand torch that I can shine towards (but not at) approaching traffic, such torches don’t dazzle and can be directed where you want them rather than where your head is pointing. Of course head torches have pluses too and dependant on circumstance one form of torch will be ‘better’ than the others. However, that (hand torch) is my preferred choice for my current particular use on the roads that happen to be where I am; other choices might be appropriate to other places and users.

The idea seems a bit unwieldy to me and 180 degree lights on a walking stick wouldn’t be my first or second choice but if it works for you then it’s good (for you anyway). To keep night vision good one needs to keep our eyes behind the light source and away from too much reflected light, both a light on a stick an a Lantern seem to conflict with that good practice. I quite like the idea of a reflective stick (360 degree) and (even if it might not be best practice wrt night vision) I also wonder how well a 360 degree (light emitting) lantern might work for me too. At times several vehicles might be approaching from different directions and a directional torch probably won’t let all of them know that you’re there but a lantern might work better in that situation - with a bit of thought there might be ways to shield one’s eyes from its direct light. Some ‘camping’ type torches have both directional beams and a lantern facility too. In fact such a convertible torch might be an almost ideal option because it gives, if not necessarily at the same time, a light to be seem by and a light to see with. Whether on foot or wheel I believe that we need both forms of light, or rather something to help ‘make certain’ that we are seen and and something to see where we’re going.
Top

I recently collected my granddaughter from primary school. I suppose it's universal procedure that they stand in line until they can say to the teacher "I can see my mummy/daddy/ etc." Currently, that line is 20+ yards from the waiting masked-up carers. With the low sun right behind me, she couldn't see me, even with a lot of arm waving. The next time I went it was a murky afternoon and partly as a bit of fun I wore a full-length hi-viz coat. It still needed some arm waving. I joked about her still not seeing me and got "Granddad, I thought you were a builder."
Top

I found a length of horse chesnut branch torn off a tree on the towpath the other day. After trimming it to
length I've been using it as a walking stick in the current snow. After a while, I thought this could do with a handle, I found a bar end that came with my Saracen MTB clamped it on and added a washer for that 'belt and braces' touch, job's a good 'un. The logo should now perhaps read 'Saracen Serious Walking Down The Shops Stick'.
I have form for stick bicycle additions, I put a locally bought bicycle bell on a stick whilst in Sri Lanka some years ago, we called it the 'snake stick' only to be rung if any serpents were spotted, whimsical but true.I've a picture of it somewhere. 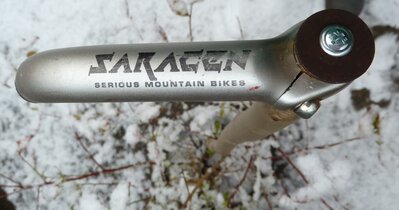 I like the light idea if only to have a torch handy, a little knog light or similar would do, mmm, I sense some pudding over-egging in the Saracen stick department coming up..
Top

I've had this one a long time. Came from Wilko's. The light is a ring of blue LEDs, has a compass in the handle for when you get lost and is lightly sprung which can be locked out. The light can be moved through 90 ° About a fiver at the time. 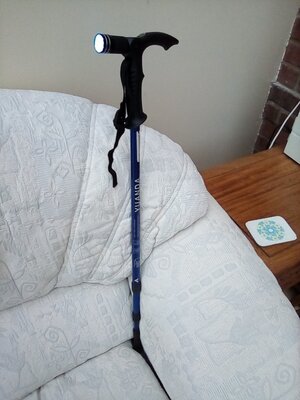 It looks like I had a mark 2 version of the snake stick with an added torch sellotaped to it for walking at night, when they hunt and can give you a 'nasty nip' if you tread or disturb them inadvertently. A picture of a Sri Lankan snake on our way back down from Sri Pada (Adam's Peak).We went up there at night to witness the triangular shadow the mountain casts at dawn, an awesome sight and a lovely country.
https://en.wikipedia.org/wiki/Adam%27s_Peak
I left the stick c/w bell & torch there, after a local took a shine to it.
Twenty years ago now, where does the time go ?
A telescopic stick looks a good idea as well rjb. 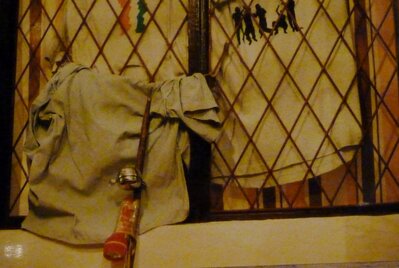 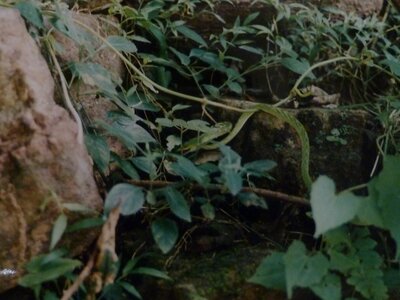 A little-known component from the Constrictor Tyre Company?

Constrictor equipment including an Osgear plus D.C.W front changer, hubs, rims, wingnuts, lamp bracket, toe clips and straps, pedals, honking rubbers and the combined handlebar end plug and container (sold with rubber solution, patches and sand paper). It would be too much though to hope to find usable Contrictor tyres or tubulars to complete the showpiece.

No mention of a bell, I fear
Top

I believe the Asp is a venomous snake (Cleopatra's suicide method) not a constrictor like the Boa. So a bit of a mixed naming.
Top

thirdcrank wrote:
No mention of a bell, I fear

https://www.bicycles.net.au/forums/view ... hp?t=59137
I reckon a couple of those would work a treat on a walking stick.
Top
Post Reply
33 posts