Use this board for general non-cycling-related chat, or to introduce yourself to the forum.
Post Reply
34 posts

Hi Colin,
do you ever see some of the "older" council workmen when cycling around the area.
Some of the "beat" boys will possibly remember working in the area and lots of them had a speciality in repairing bridges, culverts, stone banks etc.
Might be worth keeping your eyes peeled and having a friendly chat with them.

As an aside, I have a council culvert running underneath my driveway and I noticed my drive sinking last year and some holes appearing.
After seven months the council sent a couple of guys out and I was chatting to the foreman, asking if he ever worked with a couple of the council workmen I'd had dealings with through my work with BT around 40 years ago.
He rattled off all the guys names I'd come across and I then realised that this chap was probably a young man working alongside them at the time.
He's now 60, with 44 years service, so he's probably changed a bit since I possibly met him.
Top

Colin.
That bench wasn't there when we lived there!
We lived at No 7 Ranleigh Drive on the left as you go down.

Opposite the top of Ranleigh Drive was a track up into the fields by Woodcock Hall, main entrance was opposite Clovelly Drive. The Hall was a farm, and they had a cart horse in the fields. I climbed on it once and it ran off across the field with me hanging on for dear life!

Also, the Hall used to do strawberries, and we kids used to do the strawberry picking in the summer and were paid 3d per punnet filled.

Further up Cobbs Brow there was a farm on the right where we used to go spud picking in the October half term. Paid 25/- a day.

We moved to Newburgh in 1965 from Wrightington when those bungalows were brand new. I joined the RN in 1969 and always went home on leave. After being away a year on my first ship, I came home on six weeks leave, and met the future Mrs Mick F on a blind date January 1971.
She lived in Burscough down Alexander Close just off Junction Lane. Married my Burscough-Girl in November 1973 and moved to Portsmouth never to live in Lancashire again.

Visited many times over the years, but that's getting few and far between now - just weddings and funerals.
Mick F. Cornwall
Top

Good Morning all and thanks for the replies so far, its beginning to feel like an archaeological crossword puzzle !
That's a good tip Fausto, next time I see one of the road gang ,I'll ask them.
I'd heard that the Colliery site was behind the Red Lion pub but assumed (by reading the map incorrectly) that it was in the field to the stream's left. I went and had a look at the back of the pub's car park yesterday (to the stream's right) ,and this was obviously the
site, it's now being used as a paddock for an animal sanctuary, there are some goats to the right in the picture. There is a big wide dip in the landscape if you look towards the rear of the picture you can see how the land surrounding it is more elevated.

I went to have a look at the Bridge across the River Douglas further down the hill out of the village, here's a picture of the boundary sign Mick posted about. 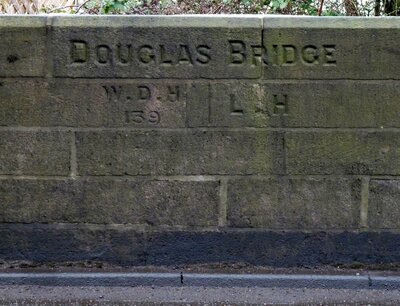 Note there is an incised line between 'WDH 139' and LH.
I had a look under the bridge and it has been totally rebuilt at sometime and now has a cast concrete road-bed capped by stone parapets. 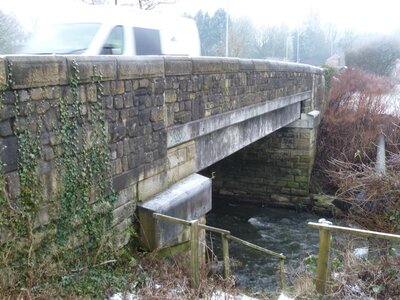 I had a think about this LH, I've seen written on the bridge at Red Rock Lane a boundary mark 'Leyland Hundred' (LH?),
'WDH 139' might perhaps be Wigan District Hundred, though I've not found that term used anywhere yet, or Wigan District Highway and the LH stands for Lancashire Highways. From the map on the Wiki page Leyland Hundred's westernmost edge is somewhere between Newburgh & Parbold.

A couple of wiki pages about The Leyland Hundred and Hundred County Divisions in general. I note from a quick scan they had a function as highway districts.
https://en.wikipedia.org/wiki/Leyland_Hundred
https://en.wikipedia.org/wiki/Hundred_(county_division)
I can't get the second link to load correctly, follow the 'did you mean' (in dark blue) at the top of the linked article, worth a read.
If anyone's still awake, what makes this interesting with regard to the 'District Wall' is that next to the word District and above the filled in arrow shape (a bench mark possibly) there is scratched faintly into the stone 'LH' and a couple of lots of numbers (picture click), I'll have to get the brass rubbing kit out to decipher !! 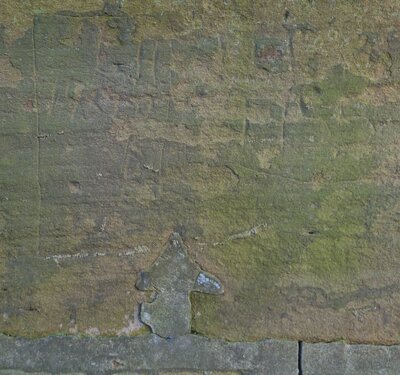 There was a bench mark shown on the old map of the River Douglas Bridge, but no bench mark there now that I can see.
This doesn't prove or disprove anything of course, but it's 'Quite Interesting' nevertheless , did the stones come up the hill from there to the village (about a mile) ?
This is giving my daily exercise some purpose if nothing else.
Top

I found out today that the WDH initials carved onto the River Douglas Bridge stands for West Derby Hundred & therefore LH makes sense as Leyland Hundred as mentioned before. It doesn't help with the Newburgh inscription though ...ho-hum. Thanks again for all your contributions, at least we've established 'Tict' is not a word in this setting (hopefully)...!
Information from a map in the history of Lancashire Wiki page.