Use this board for general non-cycling-related chat, or to introduce yourself to the forum.
Post Reply
112 posts

AKA railway modelling, otherwise known as the deferred adulthood thread. This has crept into a few completely unrelated topics before so it might be an idea to release your inner anorak and show yer wares.

I was supposed to be building a layout for my son which got delayed and he's too old to bother with such things now but the board's built, track is laid and the point motors are about to be wired up. So anyone who knows more about these things than I do, which is most people, can help out. Anyway, a couple of locos I've been messing with.

Nice bit of weathering if I may say so 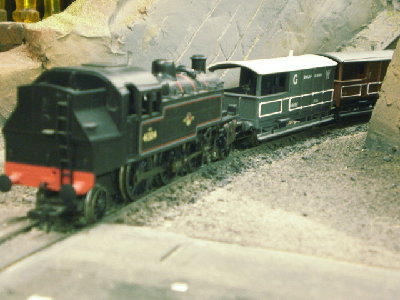 Not quite got the hang of the closeup photography, point of focus is a bit out. This is a small layout in the garage, If you see Micks thread about meeting forum members he refers to it as a "train set" this is part of it. It's designed to be taken apart and stored the whole thing is about 16 feet long.

Looks like a 3MT pulling a pair of toads Malc. Nice.
I went to one of those open garden events a few years ago and a chap noticed me looking through some old railway mags he'd left out. He beckoned me into his garage where he had whole swathes of the Great Western running where his car ought to be. A much better use for a car hut I feel.

Sadly we don't have one so my horizons have to be more pocket sized. The Ivatt is Bachmann, the gronk is a Hornby.
Top

ferrit worrier wrote:Nice bit of weathering if I may say so

I thought that myself when i first saw Gluemans pics(is this the origin of Mr Gluemans handle I wonder).
Upto being about fifteen I was into Airfix kits and really liked to get them looking as realistic as I could, so can appreciate some good weathering etc,good work Mr Glueman

PS Its also nice learning a new language too!

Thanks for the kind words on the weathering. However I am no kind of expert on railways or modelling but enjoy it in a very non-serious way.

My son had a train set when he was younger then about 5 years ago I bust my right leg playing football and happened across the very worst aspects of what I since learned was a failing hospital in the midlands. The 'doctor' held the X-ray to a window for 3 seconds, declared nothing was broken and sent me on my way. Three months later I still couldn't stand on it, visited my local hospital and discovered later I'd damaged a bunch of tendons and still find my balance out in slippery conditions and get aches and pains from it in winter. Fortunately the controlled movement of cycling isn't affected.

As I sat in one position with my leg up for long periods of time I needed something to do and began messing with trains for the first time since I was 9 years old. Unfortunately the weight I stacked on when I was immobile never fully disappeared and that coincided with less time for all kinds of leisure activities. However we persevere, very slowly, at modelling and cycle fitness around the demands of self-employment.

Anyway, here are some condemned private owner wagons about to be dragged from the final resting place to the scrapyard.

The tension lock couplings, or Margate Snowploughs as they are affectionately known, will be replaced by 3-link couplings when I can be bothered.
Top

Another one here who can't do close up photos either -

half out of focus (probably looks better that way), and all the browns have gone bright orange...but you get the picture. It's still a work in progress - all very flat and lacking in techure - needs crap and bushes spreading all over it. However, the joy of micro-layouts is that you don't have to wait till one is finished before starting the next - just been measuring up the new base board.

For me it's less of the "deferred adulthood" more of the MLC (cheaper than a sports car).

May I also second the above - lovely bit of weathering Glueman!
Can definitely vouch for three-link couplings - made my old OO stuff look so much better and you aren't left with those massive gaping gaps between coaches.
BNB Community Cycling
Top

Just an X where the image should be Si?
Top

Curiousm, I can see it! I shall put it somewhere else and try again.
edit: any better now?
BNB Community Cycling
Top

This is my work in (slow) progress. The idea was to fit a mainline through station into the smallest possible space. I chose to model a version of Cyril Freezer's old Minories idea, with some amendments. By making it a through station rather than a terminus I could save a good deal of platform space and make some of the traffic more imaginative, so what we're left with is the station throat, plus extras.

It's set in the north-east midlands somewhere on the old MR in the steam/diesel transition and will fall to Beeching's axe in the next few years. There's a junction presumed offsite to the east coast main line a few miles away which provides unusual Sunday and diversionary traffic. The near track will be a recently closed branch line that has some engineering movements but is mostly overgrown. It may have the odd enthusiast's special or guard's van trip before the metals are torn up nearer the station, and a Class 20 will provide for what's left of the industry.

The bulk of the mainline traffic consists of diesel multiple passenger units, plus agricultural traffic from the east, coal, parcels, football specials served by steam locos or diesel traction. To the left (south) an arched roof will conceal the 'station' (cassettes holding complete trains) and the right (north) will have a bridge serving a similar purpose (more cassettes).
The main points on my modeller's licence comes from the fact trains, especially goods, would have been longer than I can muster, which will top out at loco + three coaches, or equivalent truck length. About as long as can fit on cassettes in the space available given that the train has to pass to an empty cassette of an equivallent length.

The station will have some traffic terminating here, so a pilot loco (top) is retained to shunt stock off scene north. There'll be a 10mph restriction into the station which is already a bottleneck, so lots of slow movement or stops for signals.
Edit: the points are all large radius to avoid the nose going east and bogies going west look, as far as possible. Acceptable on branches, weird on mainlines. It could be shrunk a lot with small radius points and small wheelbase tank engines. The wider radius will also avoid buffer clashes when I get round to going three link and tenders can be set on the shortest gap.

Yes, got it now. Looks like fun, does anything happen on the right off picture? Is it a brewery line?
How's it work?
Top 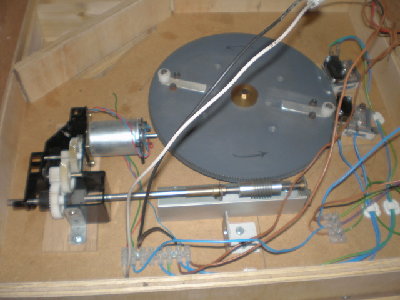 This is the underside of my scratch built turntable, the drive comes from an old printer and is speed is controlled via a guagemaster controller, of the two micro switches only one is used and is operated by the cams on the large gear wheel. this was cut in the lathe by mounting a blank on the tool post bolt and a 3/4 whit tap in the chuck. The gear blank was only tightend enough to keep it steady and the movement of the tap turned the blank

. I'd calculated the number of teeth that I'd need and cut the blank to give me the correct circumference. 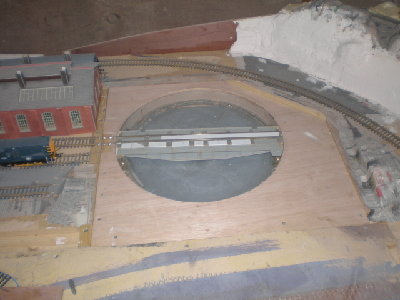 top view not finished yet still loads to do 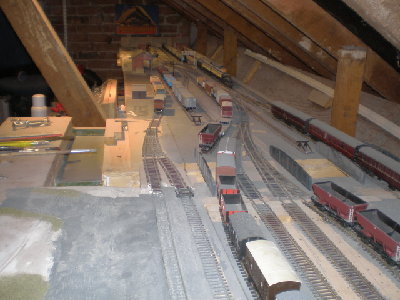 Great turntable idea and way beyond my skill. Envy that loftspace too, it must be nice to watch the trains go by with a tall glass of something.
Top

Yes, got it now. Looks like fun, does anything happen on the right off picture? Is it a brewery line?
How's it work?

Nope, it stops about an inch after the far right building.

It's a rural brewery (back left) with associated small station (green shelter) and agricultural traffic (plain platform to left - awaiting animal pens + goods shed centre back). Mostly mixed trains that need the goods wagons pulling off and shunting around once in the station. Plus a pair of wagons that are preeminently in the station that run continuously between the brewery and the cooper's (far right) - these interfere with all shunting activities and thus bring a little more interest to proceedings
BNB Community Cycling
Top

Yep, mine too. I'm currently building a turn table for the new layout...my effort is more along the lines of three nails and an old CD.
BNB Community Cycling
Top

The picture software seems to to cropping right on mine, so your brewery line may look longer on the original than the posted version. I like the idea of that Si, hours of messing about with trucks.
There were some interesting agricultural NG lines in Lincolnshire, spud lines basically and the ironstone branches of Rutland are intriguing. As the seam was worked they plonked down a bit more track - and I mean plonked, it looked like a cack-handed five year old had done it and steam outlived the mainline system. http://www.rutlandrailwaymuseum.org.uk/ ... e%20Museum

Another one I've always fancied is the narrow gauge electric asylum line that left the network at Leekbrook station for the Cheddleton hospital.
Top
Post Reply
112 posts