Use this board for general non-cycling-related chat, or to introduce yourself to the forum.
Post Reply
170 posts

glueman wrote:One of the things that used to cheese me off was the advertising the BBC embedded in regular programming for their own services. If I watch a programme on a state owned, licence funded channel I do not expect five minutes of what's on later and all the retailing bait that goes with it.
I really hate ads, whatever guise they hide under, and I'd ban child targeted advertising outright.

Too true. What I really dislike is those items on the 'News' which end with 'for more information see Panorama (or whatever) on tonight at - - -'

Having said that I still think the BBC is good value for money. It can't be much dearer than the sun {FFE - family-friendly edit }.
Top

Have you had any grief with home visits etc?

They have called on several occasions but I have never been in to welcome them, all I found was their calling card which basically said "We said we would call". Still regularly receive threatening letters as well, perhaps I need to do the same as Ben did. Even when you tell them you don't watch TV in any shape or form they still continue their nastiness so I just ignore them now.
Top

thirdcrank wrote:The present arrangement is virtually a dwelling tax, since it is almost universally applied

It's a voluntary subscription paid by those who choose to have TV sets. The fact that a great many people choose to subscribe doesn't make it a tax or something that should be paid by all.

I'm not saying it is something that should be paid by everybody. What I am saying is that in present days conditions, the television is an important facility (for want of a better word) for most people, even though that importance seems to be diminishing. I'm not in any doubt that anybody who wants a tele should pay for it. I am saying that the funding of the BBC needs to be reconsidered. In an increasingly market-lead society, it is still suggested that pay per view or some other way of way of introducing the market "would not work." This can only mean that BBC viewers would not be prepared to pay at a level to sufficient to fund the current BBC budget. Therefore, if as a society we want the BBC to carry on as now, the £££ must come from somewhere. I'm suggesting that in present conditions, where there are many alternatives to the BBC, it is inappropriate to persist with a system which was designed to fund a monopoly supplier, as the BBC was originally. The current system has other implications, for example,the BBC acts as a sort of alternative Arts Council, subsidising various things like several orchestras. These may all be "good things" but that is no reason why they should be funded by a charge on unrelated television use. OTOH, it's my impression that the market in some things, like rights to show soccer matches and the pay of TV personalities, are distorted by the BBC.

Without a licence fee, if a majority of people thought that the BBC should not be funded out of general taxation, then those interested in its continued existance would have to come up with an alternative PDQ. I used to feel that that an independent BBC was worth protecting. The present government seems to have compromised that independence with threats to the TV Licence. I doubt if any future government will retreat from that approach. Obviously, they would try to exert the same influence if the BBC were being more directly subsidised by the Exchequer. I suppose I am saying that the BBC has turned itself into a luxury most of us either cannot afford or don't want to pay for.

You do hear anecdotes about cases where the enforcement people have not been "invited" into a dwellinghouse to make an inspection and they have allegedly obtained a warrant on spurious grounds from a docile bench, presumably on the rationale that anybody with nothing to hide would let them in.
Top

hubgearfreak wrote:you're right, of course, but there's much bigger expenses that we all have to pay for, that we don't necessarily use. roads, for example

VED raises eight times more money than is spent on roads, so non-road-users (if indeed there are any[1]) don't pay for roads.

You do hear anecdotes about cases where the enforcement people have not been "invited" into a dwellinghouse to make an inspection and they have allegedly obtained a warrant on spurious grounds from a docile bench, presumably on the rationale that anybody with nothing to hide would let them in.

I understand they can get a warrant if they deem it necessary as they have no legal power to enter a property without one unless invited in by the occupier. I don't think I would let them in without a warrant even though I have no way of watching TV programs and nothing to hide. My computers don't have the necessary software installed to run iplayer.
Top

Mick F wrote:... We here in UK are subsidising the rest of the world accessing BBC. ...

thirdcrank wrote:Only those areas within range of UK TV transmitters.

That's the point (again).
BBC is funded by the licence fee.
British TV users pay for all the BBC.
If you don't watch live TV, you don't pay for anything.

The BBC has to be funded, but only those people in Britain with TVs pay for it, anyone else pays nothing. If you live in a foreign country and listen to BBC radio or access the BBC by other methods it costs you nothing. If you lived in France and had an aerial pointed at Kent, you could receive BBC TV loud and clear and pay nowt also.

Fortunately for me, most of the decent stuff on the BBC seems to be shown on Australian TV (ABC) about 6 months later.
The commercial channels here are of a similar standard to the ITV likes at home. If anything, they're more commercial - as a film gets near to the end, the number of advert breaks increase. To the point that there'll be an ad break 2 minutes before the end! And all the programmes are advertised with the gravelly overemphasized overdramatic voice overs used in the trailers for Hollywood style blockbusters - even if its only a gardening programme. I wish I had a voice like that - it'd be so much fun asking for a tea or coffee in the cafe....
gareth
Top

thirdcrank wrote:What I am saying is that in present days conditions, the television is an important facility

I disagree: I haven't had a telly for years, and don't feel I'm missing anything important. The radio provides a free source of news and current affairs, so what important function does telly perform in your view?

As an aside, I'm only arguing the principle here. In practice, I get my news from news.bbc.co.uk and Radio 4, and would gladly pay an equivalent to the TV licencing fee for those. Though advertising seems an acceptable way to fund the former: I access it quite frequently from abroad and don't find the ads intrusive[1].

[1] The BBC site uses geographic IP addressing to tell when it is being accessed from outside the UK. When it is, it serves banner ads on the site and short video ads at the start of each video clip.
TRICE Q with Streamer fairing for the fun stuff
Brompton M3L for the commutery stuff
LEJOG blog: http://www.benlovejoy.com/cycle/tripreports/lejog/
Top

Hi Ben.
Not wishing to hijack my own thread, do you have some evidence/facts/details to support this?

(Back on track) Could this same sort of info be attributed to the TV License?
£142 per annum multiplied by the households in UK equals what, exactly?
Mick F. Cornwall
Top

It was an answer to a Parliamentary Question about five years ago; I doubt that the ratio has changed since.

AFAIK, all the money raised by the licence fee goes to the Beeb, but as has been pointed out, the Beeb does a lot more with the money than just telly.
TRICE Q with Streamer fairing for the fun stuff
Brompton M3L for the commutery stuff
LEJOG blog: http://www.benlovejoy.com/cycle/tripreports/lejog/
Top

As I understand it, they are empowered to inspect TV equipment but have no power to enter a dwellinghouse. The explanation of this on the back of the licence has become a lot more user-friendly

Our officers may visit the licensed place to verify our records and inspect the TV equipment at any time, but you do not have to let them into your home. (Emphasis in original)

Here's the legislation - needing a TV Licence is tucked away in section 363. The power to issue a warrant is here, in s 366:-
http://www.opsi.gov.uk/ACTS/acts2003/uk ... pt4-l1g366
In simple terms this means that somebody must give evidence on oath that they have reasonable grounds for believing BOTH that a TV Licence offence is being committed AND they cannot get in without a warrant. (If there's never anybody in when they call, that can justify the second condition.)

Incidentally, scroll down to section 368 for definitions and it seeems to me that if the Secretary of State decides that internet TV, for example, should be subject to licensing, it can be done by statutory instrument (i.e. no further parliamentary legislation is needed.)
Top

...... “television receiver” means any apparatus of a description specified in regulations made by the Secretary of State ............

Seems a bit woolly to me.
Sec of State could say anything. Good old politricians, eh?
Mick F. Cornwall
Top

The growth of this type of back-door legislation is the reason that ministers keep having their sails trimmed by judicial review etc., but that does depend on somebody having the wherewithall to give it a run.
Top

about as few as those that don't watch telly, listen to the radio or visit bbc.co.uk i suspect
http://graham.hopto.org/tctforum/index. ... fferedby=8
Top

...... “television receiver” means any apparatus of a description specified in regulations made by the Secretary of State ............

We received a letter the other day.

I scanned it because I couldn't be bothered to type it out for everyone to read. Please click a couple of times for a big enough picture. 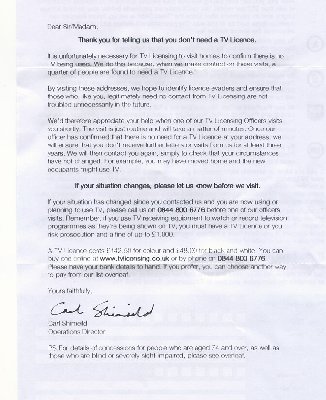 We await a visit, but I doubt they'll bother.

If they do decide to come and see, I'd be delighted for them to go away happy that we have no TV reception equipment installed, ......

....... but there's a part of me that wants to tell them to go away and come back when they've got a warrant and a couple of policemen. Even then, they may have to force there way in.
Mick F. Cornwall
Top
Post Reply
170 posts