Use this board for general non-cycling-related chat, or to introduce yourself to the forum.
Post Reply
25 posts

Do you love them, or hate them?

Found this old shot of me in Singapore in '71 - I was 18. A photographer had a snake, and would drape it round your neck, then take a photograph of you. I know some folk are scared stiff of our reptilian friends - not me! 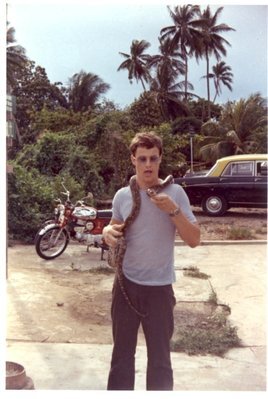 The end that is not the mouth end appears to originate in your trousers!!
Retired and loving it
Top

I've come across 3 snakes in England and all with a diamond pattern on them. So I decided not to touch them.

There's no such thing as a tailwind.
It's either a headwind, or you're going well.
Top

When I was cycling in the Sonora Desert in Arizona I was warned that I had to be very careful to avoid rattlers which were often to be seen basking at the edge of roads. In three weeks of cycling I never saw one. I did get to see a large black snake (don't remember what the species was) when I was in Maryland, but I'd never seen a snake in Britain until finally getting close to an adder in Devon last year. I tried to get down to take a close up picture of her, but I was with a group of people and that made her nervous and so it was wiser just to stand back and admire. It was a beautiful animal. I'd have loved to get a shot of the head in detail.
It wasn't as friendly as yours Mick.

cycleruk wrote:I've come across 3 snakes in England and all with a diamond pattern on them. So I decided not to touch them.

You must have adder good look at them then!

cycleruk wrote:I've come across 3 snakes in England and all with a diamond pattern on them. So I decided not to touch them.

You must have adder good look at them then!

The first actually was dead - so that would have been o.k.

Only a small one (young?) about 6" long.
In a pool of water in the gutter. West side of Windermere. It was in 1993 and we were on an Outward Bound course.
We were there 2 weeks and the only days it didn't rain was the day we got there and the day we left. So can understand why it had drowned

The second was slithering through the grass at the side of Coniston water. Again not very long but bigger than the first.(~ 15"?)
It slid into a hollow that was ringed by a fence so maybe the camp owners knew about it? 1977 I think?

The third at Newby Bridge. We were in the car and as we went over the bridge I saw it sliding across the road.
Again about 15" long.
Just then a "White" van came the opposite way and ran over it.
It reared it's head (the snake, not the van) and you could see it's fangs come down as if to strike. I turned the car round and went back. It was still alive but part of it's internals were hanging out. Needless to say I didn't pick it up, but used a stick and lifted it onto the grass verge. Chances are it wouldn't last but you never know?

So all three in the Lake district.
There's no such thing as a tailwind.
It's either a headwind, or you're going well.
Top

When we first moved to Pembrokeshire, we took some visiting friends for a walk near Newport golf course.
As we set off, there was a wooden sign in Welsh. My mate's wife asked if I knew what it said and I jokingly replied that it probably said "Beware of Snakes".
We walked around the dunes and coastal path for a couple of hours and on returning to the sign, we noticed that on that side, in English, it read...
"Beware of Snakes".

We've seen quite a few here, grass snakes in the garden etc., but the best one was when we were on a tandem tour a couple of years ago. Cycling along Route 4 near the Wetlands centre near Llanelli, I was enjoying the scene through the shading trees when Mrs.C on the back of the tandem yelled "Mind that, mind that!"
I was just brought to my senses in time to avoid a huge (honest) adder slithering across the path.
I brought the tandem to a halt just beyond and raced back to try and photograph it, but it was hidden in the dense undergrowth.
I did get a good photo of a snake while cycling on Glaisdale Rigg up in North Yorkshire before that though.
Although, I think it was a slow worm actually. Incidentally, I don't know where they get their name. They certainly move fast!
Top

Lots of snakes on the North Yorks Moors. In 58 years I've seen three.

Apparently they're common so how you see a rare reptile I don't know!

"I thought of that while riding my bike." -Albert Einstein, on the Theory of Relativity

fausto copy wrote:I did get a good photo of a snake while cycling on Glaisdale Rigg up in North Yorkshire before that though.
Although, I think it was a slow worm actually. Incidentally, I don't know where they get their name. They certainly move fast!

Just the sort of challenge I enjoy! The slow worm is a corruption of Old English slāwyrm, though there seem to be vast amounts of doubt about what it actually means with lots of different interpretations. It could mean a number of things including 'fast snake', 'creeping snake' , 'snake which doesn't bite' and even 'snake snake'.

If you're unfamiliar with reptiles slow worms are very easy to identify at a glance, apart from being quite small. Snakes have bulging heads which are obviously physiologically distinct from their bodies whereas slow worms have a head which is the same diameter as their body.
If you want to look for them they are quite easy to find as they'll often rest under things like sheets of corrugated iron or pieces of old wood, and they aren't too disturbed by someone taking a quick look. Adders like the same hiding places too and you should be careful not to agitate them. Sometimes you can find bits of sloughed off like this:

Never beeen "lucky" enough to see a snake in the wild in Britain, saw one in Italy once.

Have no problem with snakes and have had one drapped around my neck as Mick's picture, though I might feel differently if cycle camping in some exotic country with an unknown snake around.
I stand and rejoice everytime I see a woman ride by on a wheel the picture of free, untrammeled womanhood. HG Wells
Top

A mate of mine used to keep Indian Pythons. He brought one to the pub once and draped it around another friend's shoulders. The snake promptly relieved itself all over the victim's new suit.

The mess was horrific. We didn't stop laughing for weeks.

Have you ever had a parrot on your shoulder?
I remember seeing Treasure Island and LJS never had any parrot poo all down his back. We have an African Grey, we've had her for 25 years, and I can confirm they make a mess - a great deal of mess!
Mick F. Cornwall
Top

About 15 years ago ?? I was on a cycling holiday in Spain, staying at Estartit, just to the south of the town/village a path skirts the river inland for a few miles. I, my brother and his kid (whose now 6’ 6” and far to fit for me to torment as I used to) were pedalling down the path when I spotted a tiny presumably baby snake in the middle of the path. We stopped and got down on our knees to have a good inspection.
The snake which was only a few inches long was coiled up with its head reared up and held slightly backwards. It looked straight back at us, Walt Disney couldn’t have improved that snakes poise and charisma, for all it was only a few inches long everything about it said - don’t mess with me.
Just then a woman rode her bike down the track and squashed it, we were gutted – as was she when she realised.
Funny how you remember certain things.
Graham

)
Riding past vegetation which snaps and rustles is nerve wracking, although most of the time I guess its just birds in the bush. I've seen plenty of lizards and goannas but only one snake, and that was well dead, although about 5ft long (this may be a fishermans 5ft long but its my story and I'm sticking to it) - a copper bellied black snake, or a black bellied copper snake, I forget which. Either way, even though it was pretty dead, I didn't get too close. Its probably one of the few things me and Indiana Jones have in common - I'm petrified of them.
Camping is another thing altogether. I wake up everytime a sparrow farts...
Top
Post Reply
25 posts