You don't need a word of explanation, but I was advising a local group to use Wordpress and its free hosting for a website/blog, and it felt like a good idea to create a blog for testing .... and it sort of got out of hand.

It really is incredibly easy to set up and maintain, costs nothing, and anyone can do it ... I'm quite impressed with Wordpress.

I'd do one for my two new arrivals, but TBH, controlling them is taking so much efort that I've no time for anything else! Actually, Banjo isn't too bad, but Parsnip has become the destroyer of worlds.
BNB Community Cycling
Top

Aaaah, sweet! What a beautiful face that cat has!
Top

Anyone ever heard of Fat Freddies Cat?

Another fine example of the literary cat. 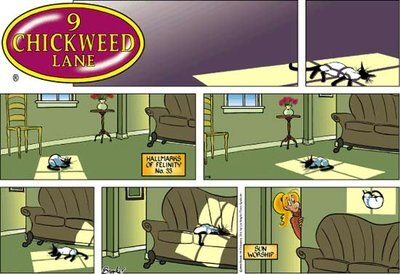 http://www.simonscat.com Just watch those films - I challenge you to stay upright in your seat!

Made a big mistake on Sunday.
Put a bit of cat-nip on the carpet.
Our old cat tried it once - just had a sniff and then went back to sleep, so I wasn't expecting much of the kittens.
They sniffed it, they clawed it, they rolled in it.

THEN ALL HELL BROKE LOOSE!

The quiet shy one turned into a monster, just ran around biting and clawing everything and every one, especially his normally more boisterous brother. The play fighting turned into WWIII - all hissing, flat ears and arched backs, teeth and claws. Had to separate them several times and had to stay in to keep the peace all morning until they had worn themselves out.

On the packet it said that it transforms a cat into a 'mild euphoric state'. Whoa, bad acid dude.
BNB Community Cycling
Top

Thanks for that ............ wonderful stuff: humour is real life slightly exaggerated.

Scrounged food.
Slept on hot water tank
Checked fridge door wasn't open.
Went in to garden.
Brought back half a mouse and left it on the doormat.Licked bum.
Went back to sleep on water tank.

I'd rather have a tapeworm as a pet. They still eat your food, but at least they don't claw the sofa.
Top

I'm going to get more hate mail from that last post than all my other ones put together.

hamster wrote:I'm going to get more hate mail from that last post than all my other ones put together.

As a hamster you won't get hate mail, just an invitation to lunch with Gus.

Deckie wrote:http://www.simonscat.com Just watch those films - I challenge you to stay upright in your seat!


I'd rather have a tapeworm as a pet. They still eat your food, but at least they don't claw the sofa.