Pictures of your bike(s)

Use this board for general non-cycling-related chat, or to introduce yourself to the forum.
Post Reply
1614 posts

Indeed so, although he's come to terms with them now. It's a bit of an uneasy truce rather than joy and delight at the thought of a ride. Still even that's good progress.
2020 - To redundancy ... and beyond!
Top

Just finished some light restoration and fitting some upgraded parts.

A great local runabout and suprisingly good on longer runs. Known in the household as 'The Mighty Sparta'. I love it! 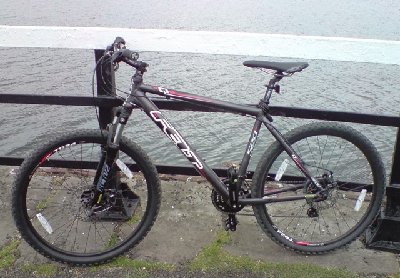 Velorum wrote:A great local runabout and surprisingly good on longer runs. Known in the household as 'The Mighty Sparta'. I love it!

i love it too. fantastic

Gave my 20 year old steel tourer an outing today. Campag triple gears, Mavic wheels (from Mercian) and a lovely Reynolds frame made by Steel in Gosforth. Lovely ride - I should use it more! 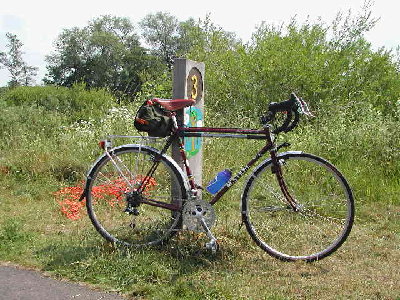 This is my everyday hack. Its a Saracen Tufftrax I bought new in '95. Decided last year it was past its best so had the frame blasted, resprayed (should have got it done properly in hindsight). Serviced the good bits and replaced the iffy with Deore derailuers f & r, new cluster, new headset (MPart - feels a bit cheap but works), new old stock STX canti's, new cables and a new BB.

The mudguards i'd already fitted after a wet day in York, seeing loads of bikes with proper geeky mudguards and riders with dry backs

The rack was pinched off our 2nd hand tandem & looks like a tubus lookalike. Twice a week its fitted with panniers for our grocery shopping. The green bungees usually tie down a multipack of UHT & bog or kitchen roll. Stands out a mile when loaded and drivers are most courtious in these instances

Todays shop was without milk or rolls - hauled a 5ltr tin of floor paint between the panniers instead (its applied & dry now as the pics show, the bikes are sat on it) Heres the tandem. An Orbit from 2nd hand from Sheffield.

This is used with 7 yr old stoker Emma-lou since we fitted crank shorteners from SJS - would have preferred the Highpath Engineering shorteners as they look far tidier, but the factory is shut for a refurb & well - summers here

The SJS equivelents work well though & we have no complaint with them in use whatsoever.

From a pilots point of view, its a bit weird to ride but I think thats more of a 'tandem' thing than anything else - for example that the back wheel isn't pivoting under your behind, but from a good way further back. It rides safer than the tagalong we used previously though.

Tucked behind it is a Raleigh Twenty Stowaway. Bought for the missus to try, its had one careful owner from new and is a nice little bike. Why Raleigh don't shout about them on their websites history page I dunno, as they are great - though we'd go for a non folder if buying another as they ain't no Brommie And this beastie is a BTW purchase. Its a Cannondale Synapse triple with Tiagra bits. It also has long reach brakes and mudguard eyelets so will be getting shod with either chromoplastics or bluemels sometime soon. What it doesn't have is a means of attaching a guard where something bigger would have a chainstay bridge, so unless C'Dale respond to my email with a 'This is how its done', i'll be having a go.

Why mudguards? Because as uncool as they may seem to some, I don't mind wet weather too much, but hate road muck. And also because its white

My commute is probably about 16 miles by bike & I work 12 days/nights so it won't be getting used everyday. I will do the commute on it occasionally though - have done on my Saracen a few times & a roadbike will undoubtably be an easier ride.

As the car see's next to no use between stints at work though (once during the last week for a trip to the tip & B&Q), and the bikes get plenty, I won't feel too guilty - we all need a rest

reohn2 wrote:Swizz69
I always think its a sign on class when the wallpaper matchs the best bike's colour scheme

Yes, it's a bodged up Raleigh Pioneer!

After riding all sorts of impractical things over the last few years, I decided I needed something sensible for touring this summer and beyond. What I really wanted was a 531ST-framed touring bike, but after realising how much a decent one can cost, I started looking for other suitable steel framed 700c wheeled bikes. What I found was this early 90s Raleigh Pioneer Trail, in timewarp condition - it probably hadn't turned a wheel since John Major was PM. Neatly welded 4130 CrMo steel frame, mid range early 90s Shimano oily bits, Rigida rims, SR crankset - what's not to like?! reohn2 wrote:cjchambers
Not a lot wrong with that,i would imagine the frame is Tiawanese and if its build qaulity is as good as my Thorn Audax MK3 it should be a pretty rugged frame well worth upgrading the bits as and when,the bar end gripshifters aren't my cup of tea but to each his own,good 'un IMO.

I would imagine that this is actually made in Britain. My wife has a lower spec model that's probably a bit newer and that is made in britain. Same colour as well; really nice paint job - much better than either of my Dawes bikes!

Loverly bike you've made yourself there. Enjoy!
"Marriage is a wonderful invention; but then again so is the bicycle puncture repair kit." - Billy Connolly
Top

CJC, Great to see another one! These are excellent bikes and I'm fairly sure that they were indeed the last Raleigh frames actually built in Britain.They do make great touring bikes too. Mine has also been a 68" fixed-gear,Sturmey' 3 speed and now a Sturmey' 5 speed,my favourite incarnation by far! The only original bits now are frame,seatpin and brakes.

My Raleigh Pioneer is on page 29 of this thread (it's other's too but blowed' if I can find them!).

Those original tyres were truly awful,heavy and sluggish as hell. You won't be dissapointed,there's not much these bikes can't do.

I'd been wondering about the origin of the frame myself . . . . . according to this history of Raleigh (http://www.users.globalnet.co.uk/~hadland/raleigh.htm), they were still mass producing frames in Nottingham up until 1999. How many were imported alongside that I don't know . . . .

I found your photos, pioneer - yours looks remarkably like mine, and very neat with the Sturmey Archer!
Top