by rollinbone
Been rummaging around my old pics and found this 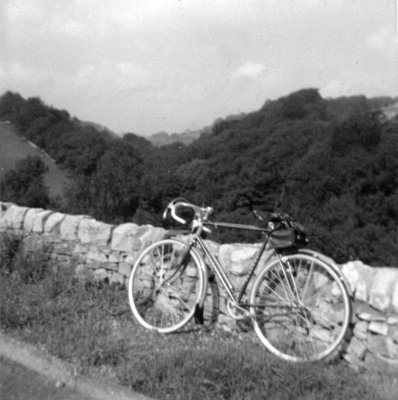 Bike was a Raleigh with a 5 speed Sturmey Archer gear hub and with what looks like a Brooks saddle!

All for about £18 from 'Suggs of Sheffield'
What a wonder the internet is I have found a pic of the store in 1960:-
http://www.heritage-images.com/Preview/ ... nseType=RM

The thing I remember is how quickly the bikes of that era started to rust-
Even the rims and spokes, not to mention the steel frame. One trip to school, thru a puddle, and it started!

Anyone else got a pic of their 1st??

by downfader
Nice. What camera was it, looks almost boxbrownie in quality.

My first real bike was a white Raleigh BMX of some sort, early 80s just after ET. My first bike that took me places was the one I got when I was 14. I used it until I was about 22, a Raleigh Scorpian hardtailed moutain bike.

I dont think I have any photos of my old bikes. Now I think about it that makes me feel quite sad. Its not as if I didnt have the cameras, either.

by kwackers
Mine was a 'Mongrel Special', hand made from bits found on tips and painted with a stick and a tin of "Canary Yellow" paint (that someone had the good sense to throw out).

It had a Sturmey Archer 3 speed hub (nobody threw away derailleurs back then). One day I decided not to go to school and rode from St Helens to Blackpool and back along the coast road (Blackpool was shut!

) Took me most of the day - plus I didn't take any food or water with me!
Following week me and my posh mate on his Raleigh 'Tour of Britain' rode to Wales and back, on the return I fell off and severed the toggle chain leaving me stuck in 3rd, the return journey was hard - not helped by the fact I'd replaced the sprocket with the smallest one I could find to give me a chance of beating my mate on his Raleigh...

I do remember he let me have a go of his bike (just once, tight git) and it felt soo nice to ride compared to mine...

by cycle cat
My first bike was in 1974 and it was red.
It had a step through frame, a white saddle and tiny wheels.
My nan would tie a piece of string to the handlebars and tow me up the hill.
Well it did have stabilisers and I was only 5!

I have 2 red bikes now. No more stabilisers though.

by fossil
my first bike was a Raliegh Chipper

my . I must have been small

this is a pic from the web , not my actual bike

by crazydavid
I still have my 1st bike and I still use it.

It is a Townsend Montezuma, bought 2nd hand in 1980. It's a bit like triggers broom, only the frame, seatpost and handlebars are the originals. It is now my winter/reserve commuter bike, currently wearing snow stud tyres. It's slow and heavy, but I love it and will never get rid of it.

by DavidT
My first bike was Raleigh Chopper.

My Dad presented me with a Halfords race bike in about 1980. Ex skip I think (or lost and found dept) but I might be doing him a diservice

My first "proper" bike came in 1983 and was a Raleigh Medale. I saved up for this from my part time job whilst in the sixth form. Very proud. Collected from Battery Cycles in Plymouth. I think it cost about £120?

Standard steel frame, nothing special at all (by modern or contemporary standards) but that bike introduced me to all my local environs, subsequently gave me 6 months commuting in Cheshire and meanwhile took me on tours to the Cotswolds and Somerset. I was bitten by the cycling bug. The memory of the pleasure of those tours, based on a bike with a low specification, make me smile whenever I read in the mags (or on this forum) of the "must have" kit if you are going to start cycling/a bit of touring! Neither cheapish wheels (although I had updated these to alloy rims)or 3pt steel carrier collapsed under weight of camping gear! The side pull brakes always stopped me. That said, I have gradually moved up the ladder spec wise

I saw a Raleigh Medale the other day. Owner was using it as his cheap winter hack bike. Good memories.

by random37
Mine was a Raleigh too. We had no money when I was a kid, so all my friends had BMXs because they were cool. But I did brilliant things on my Raleigh. I could stand on the saddle with my arms pointing out to the sides and go around in a circle.

Of course, my first **good** bike was still in use until last year, when it was stolen. Here's a picture of it being used to carry wood to my old mooring:

It was knackered. I had to stop using it soon after that, as its top tube was bent. But I loved that bike.

rollinbone wrote:Well 'downfader' I think the camera was a Kodak but I cannot remember the type but not a 'box brownie'

I have 3 box brownies in a collection of some 30 cameras. Most need restoration though.

by CREPELLO
My first proper bike - a Carlton Continental, apparently identical to the one pictured but I'm sure mine had 24" or 26" wheels - I was only ten. It certainly gave me a life long taste for classic steel bikes.

by Steve Kish
My first bike was an old Hercules, bought for 30 shillings in about 1963 from someone at school. Single speed freewheel, 26 x 1 3/8 tyres/wheels. I immediately repainted this in blue with Humbrol enamel without all the time-wasting drudgery of taking the old paint off!

by beachcomber
My first proper bike was a Triumph with 24" wheels. It was used extensively off road. (No mtb s then) It later served as my paper round bike.
For my 12th birthday I got a 2nd hand Dawes.5 speed, mustard coloured with dark green bar tape and trim. Kept it until a few years back when it went to the skip. Kept the bars and stem. The bars were engraved with a leafy pattern.
Next bike was given to me by a neighbour in 1971.A Sun Wisp, fixed gear, large flange hubs, wired and soldered spokes. Brooks saddle. I sold it when I joined the army. Got £10. Almost a weeks wages at the time.

by Mick F
I'd had three wheeler and a two wheeler hand-me-downs, then for my twelfth birthday, I received a Hercules AMF. Sorry, no specific photographs, but it was red and wonderful! Like this one, but red: 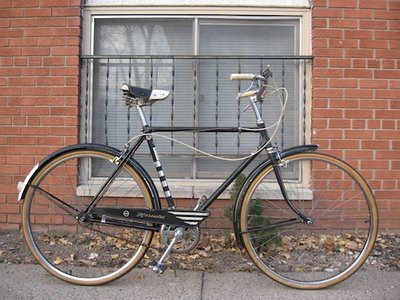 I rode it constantly. I rode it to school, I rode it to visit girlfriends, I rode it on my paper round and to go to the shops on errands. I toured N Wales on it too.

After I joined the RN, I took it with me to Hampshire. We got married and I commuted to work on it up in Scotland. Eventually, back down in England when I was in my late 20s, I gave it away to the young lad next door.

As a 12 year old, I never thought that I would still be riding it at 28.
All times are UTC
Page 1 of 2
Powered by phpBB® Forum Software © phpBB Limited
https://www.phpbb.com/