First day of NOT owning a car tomorrow

Use this board for general non-cycling-related chat, or to introduce yourself to the forum.
Post Reply
286 posts

Good luck. I hope it works out for you, it'll be a worthwhile experience either way.
I'm between cars, my last was a company car that went when I changed jobs in 1997, I haven't given it's replacement much thought yet! Luckily in that time my circumstances have made it pretty easy, that wouldn't have been the case at other times of my life, nor am I sure it will remain so. What has surprised me is how little I've needed alternatives, I was expecting to hire a car once a month and spend considerably more on taxis and buses. I've made no big lifestyle changes, just lots of little ones, shopping little and often, planning long journeys further ahead, just little things and accepting that sometime you'll need to pay for services you could have done yourself with a car.
I don't think I'm in a position to criticise others transport choices, though a lack of willingness to at least explore the choices I do find irritating.
Top

That statement is utter bunkum

I think it's bunkum too. Even when someone manages without owning/driving a car themselves, they (and most of us) want a lifestyle that relies on people driving in some form or another. One individual's personal car use is a tiny proportion of the car use they generate in other ways.

Your no claims bonus will expire in 2 years, so that's crunch time!!
Top

Valbrona wrote:Car driving is the preserve of the avoricious and self-interested. I wish you all the luck in your life without a car. All that cycling and running to the bus stop will make you live longer. And you, just like me, might start to dislike those cyclists who also drive. Most of all I dislike those 'suits' in the higher-echelons of the CTC who are actually ... car drivers. In fact, it is about time someone set up a National cyclists organization that wasn't run by ... car drivers.

I've been thinking about this off and on all day trying to decide where I stand on it. I don't think it's altogether bunkum as I know quite a few people for whom ownership of the latest, flashest, fastest, most gizmoed car is just about the most important thing. Equally, I know folks who live on Lindisfarne who habitually drive old bangers but for whom having a car is a fundamental requirement to survive where they live; if only for getting children to school, tides permitting. I think I'm in the middle of this somewhere as I keep cars going for yonks and drive when I feel I have to.

I think where I disagree most is the dislike bit. If I go down this path then it's divisive, and I don't generally dislike anyone anyway. Isn't it the case that, as cyclists, we have more in common because of our love of cycling? I'd rather think that than start to dislike others, but that's just me.
If it wasn't for cars, there wouldn't be the amount of tarmac that there is.
Top

Awww, thanks for all the nice 'good luck' messages and 'well dones' and stuff.

Well, a eye opening start. Got SOAKED THROUGH on my way to work. Waterproofs are on the shopping list. It was black dark on the cycle track on the way home. Bought some B&M dynamo lights a year ago (love them. So practical). Thinking now I should have splashed out and bought one of the brighter versions. But, it was ok, had to go a little slower than i would have liked, but not too bad. And I'm sure I'll get to know the path better.

Worn out, can't believe it is only Monday, but feeling... I dunno, good, principled. 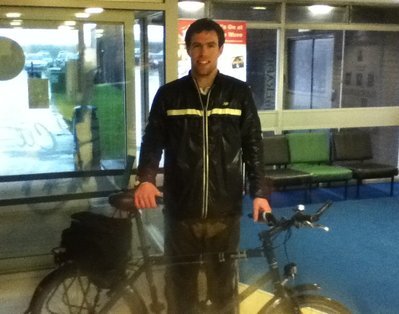 mrjemm wrote:I have recently become a car owner, having primarily used a motorbike for years. For some time the bicycle had been my primary transport, and the mobike was for longer journeys. Now that's the car's job, and though I'd like to do without it, and probably could, there are numerous things I can't feasibly do without it- carry a kayak, or tools/parts/materials to and from the (sailing) boat I am doing up.

I daresay, given that one owns a car, that it is the path of least resistance to go down that route.

But it's not to say it's unfeasible.

I think generally speaking distance is the biggest problem. If you are taking the kayak two miles to the beach, a bike's probably more convenient, once you have the kit. If you are taking it 50, then the car becomes more 'essential'.
Top

Wow, thanks thelawnet. I've seen what I thought were joke pics before, but never anything quite like those, and they're impressive. I'd be a bit scared of taking my 15 footer and kit up to Ullswater with this, but perhaps for moving it about locally if I can persuade someone we need to move to sunnier (and flatter) climes. Part of the reasoning behind recently getting my car was that I hardly ever get out kayaking, and the car's the most "obvious" way to do it. And to be frank, the most sensible. But clearly there are good options out there, though I do wonder of the legality on British roads for these; and even more so, how irate the other road users may become when faced with this!

When I got the car it immediately had issues, and I was irate (to say the least), and had a moment when I just wanted to go back to a carless state, but putting my more logical (I didn't say sensible or selfless) head, realised I should stick it out and give car ownership a chance. But this really should be a probationary state, and in the long run, would like to be able to follow Mr Polarbear's example.

Yes thats right but,it would need more reliable,cost effective,clean, public transport to accomodate all those people now driving cars.
Frankly it ain't going to happen anytime soon in this backward country we live in.
But thats beside the point,my objection was to the statement that

Car driving is the preserve of the avoricious and self-interested.

as if all people who drive are somekind of subspecies who care nought for nothing and no one but self,which clearly isn't so.

Up thread its been alluded to obesity being the car's fault.
No mention of the lack of work,and even then a lack physical work,which is somehow looked down on by society and the fact there is more sedentary work now than theres ever been.
The socio economic problems facing this country are enormous,the lack of self worth among the young are incredible,which is why we have such an alcohol/drugs problem,add to that crap served up as food in most fast food outlets.Drugs,drink and crap food are so cheap its no wonder the populous is overweight.
Someone once said "without a vision the people die" The people are dying(at their own hand) all too many have lost sight of what living is all about!

So please lets not blaim the motorcar for every ill know to man.

reohn2 wrote:No mention of the lack of work,and even then a lack physical work,which is somehow looked down on by society and the fact there is more sedentary work now than theres ever been.

Surely that's the fault of the people?
I do a sedentary job but since I know that I make up by going out running and cycling.
I don't think you can move too much blame away from the car, sure sitting down at your desk is never going to be as good as 'hard graft' but that doesn't excuse laziness of the sort that means you'll avoid a 5 minute walk to the local shop or not walk/cycle to work which for the majority is perfectly doable.

Humans are inherently lazy, like all large animals we actively try to avoid exertion and it requires an effort of will to overcome that. But in our modern world people do seem to be far too willing to overuse their vehicles.
Top

Most work and probably even most physical work nowadays doesnt stop you getting fat.
May build up your arm or leg strength but it normally isnt much good for fitness.
Too many power tools nowadays.

I put on lots of weight when I was working as a van delivery driver. The unloading and loading never made up for the time behind the wheel and I just got fatter and fatter.

reohn2 wrote:Up thread its been alluded to obesity being the car's fault.
No mention of the lack of work,and even then a lack physical work,which is somehow looked down on by society and the fact there is more sedentary work now than theres ever been.

I had a similar view before I read this excellent book... http://www.amazon.co.uk/The-Energy-Glut ... 1848135181, which shows the very strong correlation between private car use and obesity worldwide and over time. The third review (by a Denzil Walwon) gives an excellent synopsis.
Top

I'm not denying the car isn't a contributory factor to obesity it obviously is,but lets not blaim it for all the ills of mankind.

mrjemm wrote: and even more so, how irate the other road users may become when faced with this!

jem: by using a trolley like this you're saving other people from your pollution, the chance of killing their children and of leaving them parking space. If that makes them irate, then like I said above, the lunatics really are running the show.

PS People have been carrying canoes without a car for decades - where have you been?