Use this board for general non-cycling-related chat, or to introduce yourself to the forum.
Post Reply
62 posts

Resurrecting an old thread.... it's that time of year again and clear skies are forecast for Northamptonshire on Saturday night

As usual, we're due heavy overcast and rain. We've had it every year I've thought to look for the Perseids - we even had broken cloud for the total eclipse of 1999, exactly 18 years ago.

There's an interesting rock due for a fly-by as well, about two Chelyabinsks' worth were it to touch atmosphere, which it won't.
Have we got time for another cuppa?
Top

I saw several meteors within 5 mins about 5 days ago, so a reasonable few days prior to the peak. As much as you may miss the peak due to cloudy weather it's still worth just sitting for half an hour somewhere with reasonably dark sky and just watch the sky.

My memorable night of perseids was on route to see the eclipse in cornwall and having no where to stay on last leg I slept on a roadside bench( well didn't sleep! ). I had completely dark sky, clear and after seeing so many meteors I was getting rather blaise about it..... oh theres another.

At present the biggest bug bear for my viewing( and most others ) is the moon which is just past full. So far from being any "dark" sky.

Other things worth looking up and seeing are iridium flares( saw one two nights ago ) and the ISS. All of which can be found on respective websites for timings and positions.
Top

I'm not going to stay up for much later, but I may wake up in the middle of the night and I'll had a shufti at the sky if I do.
Mick F. Cornwall
Top

Hi,
Went outside at 12.30 and ended up laying on my back on the decking

Only a t shirt so did not stay long, one in twenty minutes, that's enough I set the alarm for 5 am so off to bed.
NA Thinks Just End 2 End Return + Bivy
You'll Still Find Me At The Top Of A Hill
Please forgive the poor Grammar I blame it on my mobile and phat thinkers.
Top

I saw one just after 10pm last night. first one I've ever seen

Cloudy last night but tonight is looking potentially better, also moon is reducing phase and should rise a little later leaving some good dark sky. But theres always "sky at night" 10pm bbc4 to keep up interest. As I say you can sit and watch the sky and see meteors, satellites, ISS, flares... all good stuff.

I was lucky earlier in the year to see a full on fireball meteor....... not rare but one of those things that you have to be in right place at right time and is totally unplanned. Frustrating as often you have no witness of seeing it but in my case a woman in Duns photographed it whilst out photographing iridium flares. It's on the US fireball meteor reports sight( sadly not her photo but my own and her own report ).

Edit: Found the image she took and her report was matched up with mine having same time and date. One of my pics from last night.
The moon did prove to be a problem, but with a clear sky there were a few dozen good ones to be seen 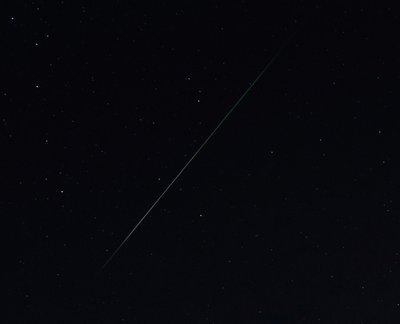 That little extra darkened sky may give the opportunity to easily see more meteors over the next couple of days until true end of shower. Outside of that there are still meteors to see and other showers to come in run up to christmas.

In the early hours( around 2-3am ) venus is looking good rising in the east. Sadly, as much as I love it, Orion is peeping up on horizon in early hours too...... summer is nearly over

The moon is very much worth observing too, seriously beautiful through small scope.
Top

old_windbag wrote:That little extra darkened sky may give the opportunity to easily see more meteors over the next couple of days until true end of shower. Outside of that there are still meteors to see and other showers to come in run up to christmas....

Whilst I'll have a brief look at meteor showers, I'm surprised they have the newsworthyness they seem to attract. To me they are pretty unexciting compared to the many amazing things that there are to see in the night sky.

I suspect many have access to even just binoculars. And there are amateur astronomical societies/clubs littered all over the country and they welcome visitors and are cheap to join and they love showing people the wonders of the night sky through club equipment (and explain what you are seeing, etc.).

old_windbag wrote:....The moon is very much worth observing too, seriously beautiful through small scope.

The news and weather do this every year..... But i guess it may spark peoples interest into the night sky in general. Well children especially, the next generation of astronomers.

There are many nice things to look for and recently around solstice time were noctilucent clouds. I really enjoy seeing these but only two good nights for me this year.

I use binoculars but my scope allows me to take time and view with a stable tripod. I also used the. Scope for imaging in an amateur fashion. Even went back to using toucam to image jupiter in springtime, not after much issue in adapting drivers to work on win8. In fact win8 has been a big issue on many legacy products i have.
Top

old_windbag wrote:.....
I use binoculars but my scope allows me to take time and view with a stable tripod. I also used the. Scope for imaging in an amateur fashion. Even went back to using toucam to image jupiter in springtime, not after much issue in adapting drivers to work on win8. In fact win8 has been a big issue on many legacy products i have.

The solution I've gone with and may help where there are legacy issues is to ditch Windows and switch to Raspberry Pi under Ubuntu Mate and running Indi. Indi is an Open Source (free) Astronomical driver system and has a vast range of drivers for telescope drives, cameras, auto-guiders, filter wheels, auto focusers, dome control, etc., etc. It runs on primarily Unix/Mac (though there is talk of a Windows version, but the network architecture and client/server architecture means that when you have a massive range of configurations, particularly when to e.g. introduce a Raspberry Pi at the scope. I run the Indi server on my Raspberry Pi at the server and the Indi Client (plus Sky Safari) remotely on my Mac. If you are Windows based, you could run the Indi Server and Client on a Raspberry Pi (under UbuntuMate) and then control it all remotely using a VNC client on your windows computer (in the warm indoors!); or just run a Ubuntu virtual machine on your windows system. As with many OpenSource collaborative systems the documentation can leave a bit to be desired, but it's not too bad (but is not a 10 minute learning curve), it is under active development and the developers are very responsive if issues are found. http://indilib.org.

The [Indi] system is in two main parts "Client" and "Server". There are several clients (it's an open source system), but the main free Indi's own client is KStars/Ekos and the clients do things like direct the scope, control the camera and collect images, do any auto-guiding, etc. depending on what you've set-up to do whilst the "Server" side are the drivers for the astronomical hardware (Telescope GoTo, camera, etc.) (and there are simulator drivers if you want to play around learn, etc. without scope setup). The Client and Server sides communicate over "network" so can be remote on different computers or can run on the same computer. You can even cascade server sides (i.e. have different astronomical control on different computers network connected). Massive flexibility and all for free.

On the client side, Indi's own KStars/Ekos: KStars is a skychart/planetarium application (not bad but not the best) and can drive to scope to elected targets, whilst Ekos is the client control system for the Indi astronomical control side (connecting to kit, setting driver parameters, control of cameras, collecting images, auto-guiding, etc., etc.

Being Open-Source the Indi system (KStars/Ekos and server side) are free download (no registration or anything, no subscription, nothing commercial).

Excellent informative post ian. I shall have a look in more detail at website when on laptop later. For night sky objects on pc i use stellarium to see where planets are and at what time etc, it shows satellites, comets, etc. My scope doesn't have a goto system but has an equatorial drive, that receives serial commands from hand controller( tracks at 1x,8x and 16x). I discovered that when i took it apart recently, for the price the chinese put a lot inside. Its a skywatcher heq5, not as easily upgradeable as more recent mounts to make it a goto, but can be done for about 150 pounds.

In terms of vfm i think skywatcher do some nice amateur scopes.
Top

Resurrecting an old thread as this weekend 7/8 Oct it's the Draconid Meteor shower (sometimes knows as the Giacobinids). Look towards ... yes, the constellation of Draco (Draconid ... Draco ...).

How dramatic the shower is varies year to year. In the past there have been some really amazing shows with thousands of meteors her hour (e.g.1946). I believe the source comet returns periodically (every 6 or 7 years) leaving further debris trails so what the shower is like is variable year on year.

But, very full Moon at the moment very bright at night and Moon up all night!