by ferrit worrier
Last December we lost our "Mina" a young torti cat, she disapeared when the fitters came to fit our new boiler. Mrs Fw said that she was "Out the back door down the garden and over the fence like a bat out of hell" never to be seen again

during the last week Mrs FW has been visiting the local cat / animal sanctuary. and today brought home two "Rescued" cats Rosey and Dexter (brother and sister 5 years old) . both a bit timid at the moment but they'll come round 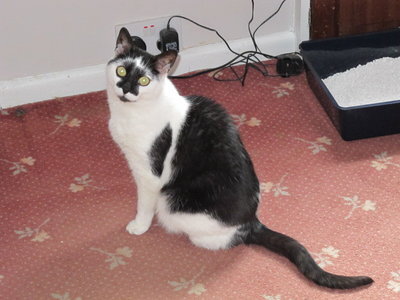 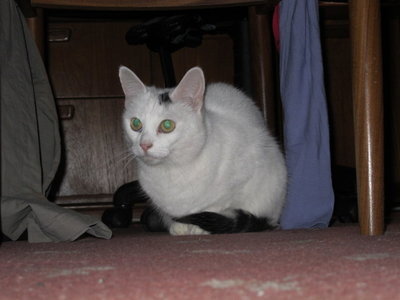 The first one has the slightly surprised look and the second needs a stick on 'tash to properly look like Hitler.

Hope they have a good aim on the litter tray otherwise it could be an electrifying experience!

We have two cats now. One was a rescue (Sadie), and the other one a stray (Nellie). Both are girls and both willing to be outside rather than using a tray.

Mind you, Nellie refuses to use the cat flap. We've had to take the "flap" off so we now have a square hole in the back door and it ain't 'arf drafty!

Not too bad this spring, but it was a trifle chilly during the winter. Hopefully I can replace the flap and train her to push it open .......... or we're going to have to get a cat tray.
(and plug it in to the mains)

by Mick F
PS
I was cutting the grass yesterday - we have lots of it.
We have four cat graves at the end of the garden with flat stones on the tops, so I have to drive the mower round each of them.

Seska, George, Tegan and Annie, and I always say hello to them.

by ferrit worrier
We've lost quite a few "Bunnies" to the local fox and old age most are at rest on some land at Alderley Edge along with a few other four legged friends . Our garden only has about 6 to 8 inches of soil then its hard clay. It's nice to be able to wander over to where they are and say hello.

Rosie and Dex seem to be settling in ok, I tried them with some "treats" this morning but neither seemed to know what they were, Dex soon got the idea but Rosie is still a bit wary yet, not to worry it's still early days.

by al_yrpal
Lovely markings on Dexter and that lady is a pretty one too. Had many cats over the years but being retired when the last two went we decided to be petless so that we can travel whenever we like. We now have surrogate cats, Mungo and Gerry who live next door and come over for a smooth and to try and hide near the bird table and we have a surrogate dog a Golden Labrador, Piper, who lives around the corner with my son and family. He is always up for a walk or a days hiking in the week. Enjoy them:..

by Binkyboy
I have always had a cat (occasionally two), but when the last one died, aged 13, in 2006, I didn't replace her because like another poster, I wanted to travel more.
I have travelled a lot more, and for longer periods, so it was the right decision, but I do miss having a friendly face to come home to, and a warm bundle next to me on the bed at night.

Even now, just for an instant, if there is something on the floor in an unusual position, and it's the right colour, I think it's the cat !

I trained all my cats to use the cat flap by the simple expedient of pushing them bodily through it, then using one of their paws to open it. They all cottoned on in the end. As for removing the flap totally - blow that for a game!

by ferrit worrier
They arrived on Friday afternoon the picture below was taken Sunday morning.
Talk about feeling at home 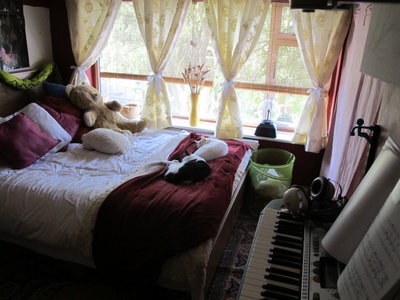 by Redvee
This is my new upstairs neighbour. A little too friendly when I'm trying to go out, luckily there is a door at the bottom of the stairs I can shut to stop the cat getting out the front door onto the busy road.