Use this board for general non-cycling-related chat, or to introduce yourself to the forum.
Post Reply
644 posts

What is black and white and red all over?
..
The labour party! It includes black people and white people, and is somewhat left of centre

How to get a seat on the london tube?
just start coughing

( not pc though)
Top

Saw this one recently 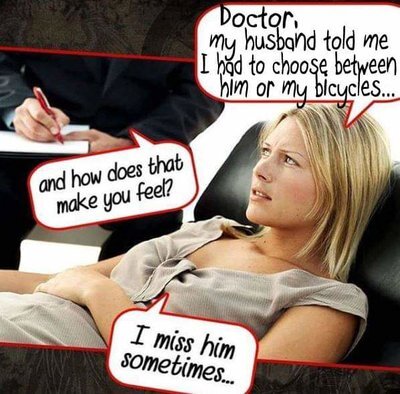 A yob drove his vehicle into the back of Ebenezers Granada
'Haven't you taken a driving test?' bleated the old gent
'I bet I have taken more driving tests than you' whimpered the yob
Entertainer, kidult, curmudgeon
Cycling-of course, but it is far better on a Gillott
We love safety cameras, we love life "597"
Top

mattheus wrote:What is black and white and red all over?

I'm afraid that's one of the old classics that doesn't work when written.

The other one I know is, "what's brown and smelly and comes out of cow[e]s backwards...?". Are there any others like that?

How do you find WIll Smith if it's snowing?

'What have we got in the diary this week?', asked the boss
The secretary had a look: 'Monday, Tuesday, Wednesday,.. Thursday and Friday', he bleated
Entertainer, kidult, curmudgeon
Cycling-of course, but it is far better on a Gillott
We love safety cameras, we love life "597"
Top

Missus: What's all this crud on the shopping-list?

Me: Well you told me to put mustard on it.

A bloke down the road from us has 2 Porsches, a Ferrari, a Jag, 3 Fords and an old Mini Metro.

We suspect he has the car owner virus.
Top

An oldie this one, attributed to various dramatists....

A particularly truculent theatre critic, much given to lambasting Noel Coward's work, was furious at not being sent complimentary tickets to Coward's new production. He sent Coward a wire saying "Was most disappointed not to be invited to your First Night. Expect tickets to your Second Night - if you have a Second Night..."

Coward promptly replied "So sorry you were not able to attend our First Night. I am sending you two tickets to our Second Night, for yourself and a friend - if you have a friend..."
Suppose that this room is a lift. The support breaks and down we go with ever-increasing velocity.
Let us pass the time by performing physical experiments...
--- Arthur Eddington (creator of the Eddington Number).
Top

He brought two friends, paid full price for the second
His review was full of double-entendres
'When I checked my watch at ten o'clock, it was just gone nine'

Old man of 101 been here since 1966 wants to get confirmation he can stay after Brexit. Home Office replies - Please get your parents to confirm your age