Use this board for general non-cycling-related chat, or to introduce yourself to the forum.
Post Reply
115 posts

I happened to be cycling past the Dorset Morris Minor Club rally at the weekend so gave it a look in.

What is it about Morris Minors?
When the pestilence strikes from the East, go far and breathe the cold air deeply. Ignore the sage, stay not indoors. Ho Ri Zon 12th Century Chinese philosopher
Top

I have had a Morris Minor. The 1956 (I think) onwards models are very useable and are cheap to run as long as you keep on top of maintenance. Bags of period charm, lots of spares available.
Top

horizon wrote:What is it about Morris Minors?

Nice to drive
Last for ever
Easy to work on
millions of them made
What's not to like?

I had a lovely C reg one back in the 60's, it was a great little motor and for its time quite modern with headlights in the wings. I was gutted when I wrote it off travelling home from the in laws when a freak snowstorm turned the roads into an ice rink. But... there are many really excellent classics out there, still in good nick after loving restoration. As my mileage gradually reduces I am looking forward to the time when I buy a restored one or something similar and enjoy no VED, insurance for peanuts and being able to do my own servicing and maintenance like I presently enjoy with my Triumph Stag. The Stag is good fun but the Minor is a more practical runabout.

I only remember ever driving one and it was a van. As I was getting in, my knee banged into the point in the bodywork where the wing met the body at the hinge-edge of the door, if that's clear. So my abiding memory is of a sharp pain in my knee: a sort of aversion therapy.
Top

Well they're a cute shape,a bit like Beetles,and were I believe quite cheap to run and maintain in their day,as for owning and using one daily today,no thanks to much like hard work IMO.
I'm no car enthusiast though,they're just a tool I use.
The best car I've ever owned was a White '97 Mondeo 1.8L Zetec estate,reg no R42 SBU.
Bought five years old with 45k on the clock,needing four new tyres and a service.
I paid £2,400 for it on a private sale.
In the 8years I owned it I put a further 90k miles on the clock,it failed one MOT with the toe of a front suspension spring broke off,I had two new ones fitted.
Another year failed on two corroded brake pipes and a small hole needing patching on the door cill,easily sorted.
It had two further sets of tyres,a set of HT leads to correct an intermittent misfire,four head light bulbs(would only have needed two if I hadn't been so tight and fitted Bosch bulbs first off instead of Halfords own

).
Regular servicing,including two sets of front discs and pads and usual consumables.
It returned 37mpg about town and 50+mpg on the motorway.
Handled like a dream never let me down,totally reliable and looked a treat to my eye.
Boring?
Without doubt.
Just the kind of vehicle I like

That's my idea of motoring

An Irishman in a pub, upon seeing my Minor Van, said " You want to hang on to that my friend"
I replied " Why's that then?"
And he answered immediately "because it's basic"

And you know what, he was right and I did!
Top

I have bad memories of a Morris Minor, from school.

Crossing the road, two of us were just ahead of a group of friends. Looked, started crossing - then the Minor hove into view. I jumped forward, he jumped back. Fortunately for me the brakes of the car pulled it left, not right - I say fortunately for me, because it hit my friend, who developed epilepsy, apparently as a result of injuries sustained.
He then fitted in one of our Maths A Level exams.

Nothing the car did wrong - the driver maybe could have slowed on approach to a large group of school children on the pavement, but I don't really blame him either (I don't actually know what speed he was doing - but the limit in that area is much lower now). My view was somewhat obscured and I still decided to go, the guy I was with came with me...
A shortcut has to be a challenge, otherwise it would just be the way. No situation is so dire that panic cannot make it worse.
There are two kinds of people in this world: those can extrapolate from incomplete data.
Top

A friend of mine recently disposed of his Focus estate, the Ghia model, which he had driven for nearly 300,000 miles with his kids in a lot of the time and which perplexedly remained in immaculate condition... I think he believed he had somehow entered some sort of time warp which rendered his car immune to ageing and only got rid of it because he feared he might drive out the other side and find that the car had crumbled and expired overnight...
As he put it, "You can't expect to drive a car as far as the moon and get away with it..."
(rides: Brompton nano & ever-changing Moultons)
Top

As a steelworker, my Dad had a succession of British Leylands finest in the 1960's and 1970's. It was almost obligatory in those days and the first steelworkers to break ranks and buy foreign would find a few scratches and dents on their Datsun Cherry's

However, the 'Moggie Thou' was the one that got away and he always regreted not having one... as do I.
Cycling UK Life Member
PBP Ancien (2007)
Top

simonineaston wrote:A friend of mine recently disposed of his Focus estate, the Ghia model, which he had driven for nearly 300,000 miles with his kids in a lot of the time and which perplexedly remained in immaculate condition... I think he believed he had somehow entered some sort of time warp which rendered his car immune to ageing and only got rid of it because he feared he might drive out the other side and find that the car had crumbled and expired overnight...
As he put it, "You can't expect to drive a car as far as the moon and get away with it..."

My Mondeo was similarly immune,other than the small,75mm square plate needed on the door cill it was rust free,everyone used to remark how new looking it was,and for a white car it used to remain strangely clean too saying I only washed every couple of months or so at most.
By comparison I had two white Vauxhalls one a Cavalier the other an Omega and they never looked clean

Good - practical for putting bikes in, the vans had a real chassis, engine started on the handle if need by (usually to show off). Sold easily.
Bad - appalling rearwards visibility because the cab area was narrower than load area, wing mirrors and even a door mirror did little to help. Dreadful acceleration -you needed to take a pack of sandwiches and a flask of tea with you while you waited for a gap in the modern traffic so you could turn right into a main road.
Top

I remember seeing a Moggie out side a pub once,in the late '70's,that didn't look quite standard.
On further inspection it had sliigghhttllyy wider wheels and the rears were definitely not Moggie though the cars could've almost pass as almost bog.
Just as I was taking a gander the owner came out and we got chatting where upon he lifted the bonnet to reveal a 3.5 litre Rover engine,you couldn't get a razor blade down between it and the various panel work in there,it also had a Jag rear axle.
When he fired it up it rocked slightly sideways as he revved it and sounded awesome.

He told me he'd given some pretty fast cars a bit of a shock from TL's which I didn't for an instant doubt.It looked very well put together and was the standard Moggie green colour,which added to the sheep in wolf's attire

Saw this one parked up on Cardigan High street last month. 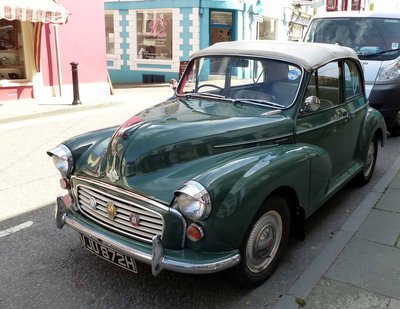 I actually wanted to buy a brand new one soon after I passed my test in 1971.
They'd just stopped making them and instead I bought a new Beetle.
That was the most unreliable car I've ever owned - a real Friday afternoon job.
I'm convinced if I had bought a Moggy I might still own it.
Top

When I was a child, an old man in our street had a black one with 'trafficators' if that's the word; little semaphore turn signals which came out of the middle of the car, between the front and rear doors. They did, I think, have lights in them but you could hardly see them at night. I remember him starting it on the cranking handle sometimes.

The ones I always like though were the Travellers, with the wooden frame round the doors and windows.
Top
Post Reply
115 posts