by DavidT
Are there more birds of prey around these days?

I’m not a bird spotter by any means but have always thought I’ve kept an eye out for anything that looks like a bird of prey over the 30+ years I have been cycling. The last 20 years of which have been in the East Midlands.

These days (say, in the last 5 years or so) I feel I am spotting far more, and not just in my own locality. Whereas I seem to remember that seeing such a bird was something of rarity, these days spotting a buzzard or kestrel seems almost commonplace. Yesterday I saw a Red Kite at close quarters in an area I'm sure I've never seen one before. I know significant and successful efforts have been made to reintroduce the Red Kite and one can see many in parts of Rutland (and Chilterns etc) etc, but this one was further to the north in the Vale of Belvoir.

Anyhow, does anyone have an insight into national trends, and what have other cyclists observed in their areas? Are the numbers of such birds increasing, or am I having selective memory (possibly combined with greater observation/interest

) and the birds have always been there since the 1980s?

by Tacascarow
IMHO yes there are, but only of cerain species.
Buzzards & kites are mainly carrion eaters & the increased resistance of rabbits to myxomatosis means there are a lot more rabbits in the countryside now to feed them.
Peregrines have plenty of pigeons to hunt & sparrowhawks have a varied avian menu.
Species in decline here in my part of the world are kestrels & barn owls. Mainly because of lack of good species rich permanent pastures that support the populations of field mice & short tailed voles, which the above species are almost entirely reliant on.
The population of short tailed voles has collapsed here in the last couple of decades & I can't remember when I last saw a kestrel or barn owl.

by 661-Pete
The Red Kite reintroduction programme in England has been perhaps one of the most successful programmes of its kind - certainly it is rare to drive up the M40 or the M1 these days without seeing dozens of these magnificent creatures soaring over the motorway - looking for roadkill and scraps thrown from vehicles. Some people may argue that reintroducing a species is 'cheating' in some way, but for my part, I am delighted to see these splendid birds around! Very few have got as far south as Sussex though, I have seen only one so far (at Ardingly Reservoir).

Buzzards are also a resounding success amongst raptors, now plentiful in every part of Britain. Kestrels and Sparrowhawks less so, perhaps, though there are still plenty of them in Sussex.

by Heltor Chasca
I do barn owl monitoring for a local wildlife charity and it often depends on the food source. When there is a problem with prey numbers the population crashes. Voles tend to peak and trough in 4 year cycles so barn owls follow suit.

I can't speak for the Midlands but I did hear someone here in Somerset say barn owls were struggling due to the success of buzzards. The Hawk & Owl Trust and The Bird Atlas would have more accurate data.

by al_yrpal
We live in Red Kite territory. I once counted 24 over Watlington very near to Gettys estate where they were first released. I sometimes chuck the skin from chicken thighs on our kitchen roof and we sit and watch the show. But, we dont feed them regularly. As well as kites we saw a kestrel on the way to Reading this morning and we do often see a sparrowhawk dismembering some hapless smaller bird on our lawn. Just recently folk have been attacked by a swooping buzzard locally when the jog near its nest. I go that way often but it doesnt seem to attack cyclists.
Are there more birds of prey, or are we more aware of them? Around here for certain there are hundreds of kites. Just walk out in your garden and there is always at least one within sight, usually its two or three.
At night, after dark we can always hear owls. Tawneys, Barn Owls and little owls by the sound of their cries.
There is plenty of roadkill around, rabbits, hares, squirrels, hedgehogs, pigeons, pheasants, grouse, badgers, muntjacks and occasionally bigger deer. In the spring out on farmland when the wheat is short the kites hand around trying to spot leverets and pick them off.

by simonineaston
My theory:
Increase on roadkill means we see more scavengers (e.g. red kites) near roads; decrease in field hedges means hunters (e.g. kestrels) use road verges more.
Imagine my surprise when a red kite took a fancy to a delightfully freshly squashed rabbit or some-such on the A420 the other day, and descended to pick at it immediately in front of me in my modest VW Lupo - I thought the sun had gone out it was that big (or so it seemed) - I don't know who was more startled, me or the kite, anyway we both survived!

by Flinders
I've seen Red Kites in Shropshire lately, east of the Long Mynd behind Caradoc. They're certainly spreading.

There are buzzards near here (NW of Stafford) who attack cyclists, it's mentioned downthread here:

I've had them follow me closely alongside when cycling thereabouts but not actually connect. Even that is a bit scary.

by Tangled Metal
There is a spot on the coast to coast (English one) where buzzard or buzzards are known to strike. IIRC that area has had a long history of that happening to C2C walkers.

Would the Farm subsidies meant to encourage the field margins being left to nature be having an affect yet? It is probably just PR since the areas I've seen that look like field margin schemes all seem to look like edges of fields that were not extensively farmed, i.e. they were not good pieces of land for the farming type concerned so often were just left. All they do is get some volunteers to plant a few trees in plastic tubes (both bought very cheaply) and pocket the rest of the subsidy money. Cynical I am sure but some truth I think.

Round here I used to see (in the last 5 years) a decent number of kestrels working the motorway verges and the slip road I take off it. I still remember the hot day about 7 years ago I looked up through my car sunroof to see a kestrel looking straight down into my car in a full hover. Due to a traffic snarl up I had 5 minutes of looking at the underside of a kestrel. Not my usual view of them, more likely to see them hovering as I speed past. Although near that sighting in the same summer I had the pleasure of watching a kestrel feeding. It was on a road verge with its wings covering the kill. Every so often it would duck down into its wing cover and come out with another morsel of a hapless prey. It was very nervous and was looking around a lot. Suppose when eating like that it is at its most vulnerable. Must admit I don't see so much these days partly because I am cycling into work so don;t drive the motorways so much these days. Certainly motorways through the countryside are a good place to spot kestrels.

I suppose there are regions with higher counts of these Kestrels and other declining birds of prey. I reckon I must live in one of them for buzzards and kestrels. Must admit I don;t tend to hear as many tawny owls these days and there doesn;t seem to be any living in this old industrial building near where I work these days since I never hear their call anymore.

by cycleruk
We have Hen Harriers in the Forest of Bowland but I have never seen one.

http://www.wwww.rspb.org.uk/whatwedo/pr ... in-bowland
Plenty of Buzzards around but not seen any Kites yet in our area.

We did go and see an Eagle Owl family at Dunsopp Bridge a few years back but I don't know if they still go there.
http://www.lancashiretelegraph.co.uk/ne ... land_bird/

by Si
I don't recall ever seeing a buzzard as a child but now see them quite often.

Conversely it was wall to wall sparrows when I was a kid, but then they seemed to disappear completely, although seeing a few more of late.

by Tangled Metal
Oh I saw a hen harrier around Clougha Pike area once. Guess you have to get out there and be lucky.
Buzzards are around. Near me I know a few spots I've seen them often. Then again I remember I used to see several on the drive up to Scotland b through the lowlands. All sitting on fences by the side of the road/motorway.

by thirdcrank
We've had red kites introduced at Harewood which is on the other side of Leeds from us.

We often see kestrels hovering over motorway verges and nearby. I don't think that that's roadkill, more that the verges are a sort of nature reserve. We get regular visits from sparrowhawks, hardly surprising because we feed the birds so we have loads of small birds in the garden. We've started seeing more buzzards. A few weeks ago I saw four together high over the greenbelt between us un the rest of Leeds.

by colin54
Red Kite and chick at the back of Harewood House last year. 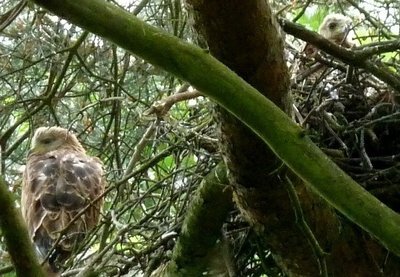 The nest was just visible from the road in a lower tree than they normally use.

We saw them being fed chicken scraps thrown onto a flat garage roof at the back of Harewood village hall cafe as well, swooping in about a couple of meters above our

heads, most impressive. You'll get 10 to 20 of them just flying round together a bit before sunset, just socialising before they roost I suppose, nice sight.

by blackbike
Blackbirds eat worms in my garden.

Does that make the a bird of prey?

by Heltor Chasca
The local COE church is headed by a lady, Reverend Sue.

Does that make her a bird of pray?
All times are UTC
Page 1 of 3
Powered by phpBB® Forum Software © phpBB Limited
https://www.phpbb.com/