The one thing I've never invested in is a quality waterproof jacket. I've done several long summer tours (up to a month) using cheapish efforts that simply haven't coped with long drawn out days in the saddle grinding it out in the rain. When I think back to my worse days it was usually because I was soaked / cold on occasion. The rain will eventually get through Ive found.

In the summer its not usually an issue I accept, I can get away with the legs getting wet but no longer my core.

It will need to be robust as it will be thrown on and off and shoved in a pannier when the sun suddenly comes out,however also lightweight for obvious reasons.

Does anyone have any suggestions for anything that has stood the rigours of fully loaded touring ?

Budget is open ended . I've got a great tent that's stood me well but getting on the bike in the pouring rain is something I really don't want to dread anymore.
Top

I've been very pleased with my btwin waterproof jacket purchased from decathlon for the grand sum of £59. See http://www.decathlon.co.uk/700-membrane ... 43741.html

It's membrane based like goretex rather simply coated and has kept my dry through the last six months of commuting.
I haven't taken it on a tour yet but it will be accompanying me on the c2c in a few weeks time.
Only downside is that it's a bit too big to fit into a jersey pocket but feels very robust against the elements.

Seriously.......Over the years I've tried so many 'waterproof' motorcycling/cycling/walking jackets, and I have not found one to be genuinely 'all day' waterproof. The best stuff that I have used is made by 'Paramo' but even then it needs regular washing/reproofing with their Nikwax products (same company)
Top

And the bin liner's only watertight if you don't put head holes or arm holes in it!

I'm using a cag in a bag in summer which packs down small (especially if you put stuff on top of it - leave it on top of the bag and it tends to self-inflate a bit) and is good for at least an hour before rain starts to get in the facehole too much. The front pouch pocket does tend to fill with water when cycling, too.

) but that has no hood, so I sometimes ponder a hooded cycling cape for the real heavy rain but the thought of how much windier it is here than where I last used them still deters me.
MJR, mostly pedalling 3-speed roadsters. KL+West Norfolk BUG incl social easy rides http://www.klwnbug.co.uk
All the above is CC-By-SA and no other implied copyright license to Cycle magazine.
Top

Have a look at at Showers Pass Double Century EX - I bought one three years ago from Spa Cycles and have been highly satisfied with it, and it's certainly been used on long rides in the rain.

Nice and light, fits well, folds up real small and good waterproofing if treated with Nikwax.

Thanks for the replies...
Top

We have been looking for the Holy Grail for 2,000+ years. It is still to be found. I have been looking for the perfect cycle touring waterproof for 20+ years. No luck. I now cannot believe such an item can be found. Perhaps it shouldn't be(found). I have looked into myself, and without deep contemplation,found riding for more than 4+ hours in heavy rain doesn't require a waterproof jacket,but a visit to my psychiatrist. You're hurting yourself in trying to find this Fool's Gold. Stop. Seek shelter. If rain persists,seek accommodation,don't attempt to go on(unless a pot of gold or pretty girl awaits you). In heavy rain you cannot see anything and are at risk of getting run over. It always goes into your boots. Most recently(yesterday)I started the same search: breathable,waterproof,light(but not too light),ventilated,no long-tailed job,not synthetic material,easily repaired,environmently friendly,natural material...It doesn't exist. Unless you want to dress as a duck?
Top

For some values of "regular": it's not like you have to re-proof them every month. Washing can be in any liquid soap, and there''s plenty on the market significantly cheaper than Nikwax's own.

The good thing about Paramo stuff is it shifts liquid water away from you, another good thing is it's a lot more breathable than membrane-based systems so it's less stew-in-your-own-juices and it's okay to wear when it isn't raining. The downsides are that the liner it uses is similar in weight, bulk and thermal effect to a microfleece so it's often on the hot side for a ride, especially if you're Going For It and/or run hot. Physiologies vary: my wife is happy to tour in hers, I usually only do short local trips on a bike in mine.

More generally, waterproofs are compromised by the holes for bits of your body to poke through. If you apply formal seals to those you'd have something like a paddler's dry suit, and aside from the very high cost you really don't want to spend any sort of time riding a bike in something like that: it'd probably be more uncomfortable than just getting wet.

Having said that, a decent waterproof will keep you properly dry in a shower, and while you'll get wet if it's set in you'll be a whole lot warmer than without it.

The only thing that works IMO is an old fashioned cape. I know people don't like them because of the wind thing, though when riding through Germany I was suprised how many young people used them on their commute bikes. I rode down the Danube with a couple of guys who had expensive cycling jackets. After a few hours they were thoroughly soaked. I was dry and feeling superior in my £10 Wilkies cape.
https://www.facebook.com/North-Manchest ... _todo_tour
Top

I use a Paramo Quito and have never got soaked even in constant heavy rain. It's been a lot better than a Gore Paclite though is a fair bit heavier and bulkier.

It's an odd jacket though. I like the loose fit but it's a bit short and a bit too warm for summer use though the massive vents are fantastic. It's kind of like a fleece and waterproof shell combined and is comfortable enough to wear when sitting around in the evenings. I would try one first as the fit and sizing aren't normal. The hood is a bit annoying for cycling too but I wanted a jacket for walking and cycling combined.

It's frustrating really that something so basic and important is so poorly supplied. As others have said, if you really want to stay dry a cape is probably your best bet.
Top 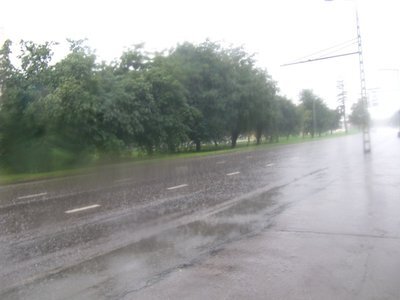 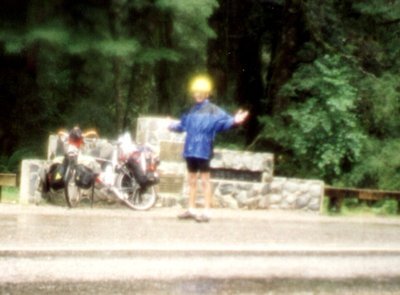 
Washing can be in any liquid soap, and there''s plenty on the market significantly cheaper than Nikwax's own.
Pete.

Like so many, I too have been searching for years for a decent rain jacket that kept me dry from both the rain and my self-generated sweat and a few months ago, I found it. The Showers Pass Refuge jacket (https://www.showerspass.com/product-category/jackets) does everything I have asked of it and more. It isn't as close cut as others which, for my touring purposes means it is much more comfortable when worn for for a long time on the bike.

My history with rain protection goes back to the seventies when the Green Sport was by far the best. Trouble was, it only kept me dry for an hour or so and then it took hours to dry out overnight. Since then, I have tried many other jackets and capes and most were at best adequate and I gave up trying to stay dry when touring. But, I resolved to reconsider that decision when one day last year I was caught in a day-long storm in France. The answer was the Showers Pass Refuge. It works really well both on the bike and off when I am walking about, sits permanently on my rear rack between the panniers and with just the normal care, has become indispensable. Incidentally, because the jacket was so good, I purchased the Refuge rain pants as well for commuting. They are just as good as the jacket.

Washing can be in any liquid soap, and there''s plenty on the market significantly cheaper than Nikwax's own.
Pete.

Nikwax's Tech Wash cleaner is liquid soap, and as such doesn't need washing out more than a standard rinse. Note that there is a big difference between soap and detergent. Detergent works by reducing surface tension so it is easier for water to flow through a garment and get it clean. This is obviously Not Good to have hanging around in a notionally water resistant garment, which is why you use soap that has a quite different cleaning action and any residue doesn't affect the waterproofing performance.

If you do use detergent to get rid of particularly stubborn dirt (detergents are more effective at getting stuff clean than soaps, which is why most people use them) then it's important to rinse anything that has a DWR finish (as Paramo stuff does) very thoroughly if you want that finish to do its job, but Tech Wash is a pure soap and not really any different in composition or action from other pure soaps, such as Dripak Liquid Soap Flakes, Lux Flakes, Granny's Soap Flakes, the similarly hilariously over-priced Granger's Extreme Cleaner etc.

Yes, Paramo's blurb says use Paramo cleaner, but there again Allinson's bread making yeast says to use Allinson's flour: of course it does, because both wish to encourage you to use their product. But just as Tesco Bread Flour combines perfectly satisfactorily with Allinson's yeast, so does washing a Paramo jacket in Dripak Liquid Soap.

But, hey ho, it's your money and you can spend it on stuff with insane markups over practically identical alternatives if you want...

bobzeller wrote:Like so many, I too have been searching for years for a decent rain jacket that kept me dry from both the rain and my self-generated sweat and a few months ago, I found it. The Showers Pass Refuge jacket ...

Looks pretty good. How much does it weigh?