ossie wrote:As stated there is no ferry from Santander to Poole.

The coastal route you refer to is Eurovelo 1, however to reach it from Cherbourg you will have a 200 mile road ride down to Nantes.

Eurovelo 1 starts at Roscoff so you could take the Plymouth - roscoff ferry!
Top

I did something similar, but the other way around. Ferry to Bilbao, then rode home to Birmingham, although I went via Burgundy. I did it in April and it was very much a ride of two halves. From Bilbao to Burgundy it was very cold and windy with some snow. I even followed a snow plough over a pass in the Massif centrale... After Burgundy it was warm and sunny all the way home.

I recall the route in the Basque country being slightly problematic - the valley roads were very busy and it was difficult to find a decent route avoiding them. However I didn't follow the coast.

I've also followed the coastal bike route from just north of Biarritz. It was great for a while, but some time before Bordeaux I started to get really bored of it and headed inland for some variety. Despite the prevailing wind, I had a black headwind the whole time.

I now live in SW France. My favourite time of the year for cycling is September and October. The crowds and the August heat have gone but things are still open and there's less rain than in Spring.
One link to your website is enough. G
Top

It is my impression that on the BF Portsmouth - Santander route you have to book a cabin as it is an overnight crossing. I tried earlier this year to book a crossing with either bicycle or motorbike but couldn't complete without selecting a cabin which was an horrendous price. You couldn't just select unreserved seat then crash down in a corner on your thermarest like ferries in South East Asia. Also they don't take bicycles as there is no bicycle option under choice of vehicle. I emailed them about this and they told me to call them direct to arrange booking which sounded a bit sus, which it was, as when I did I was told by their sales operator no bicycles on this service no exception. It might be that you can take bicycles on shorter BF crossings i.e. between the UK and Caen, Cherbourg, Dieppe, etc but not to and from Santander/Bilbao. But I am sure some one will be along shortly to prove me wrong that they have indeed taken their bicycle on the Santander route to either Portsmouth or Plymouth this year. You can take a motorbike but not a bicycle. Off season the service it cut right back. How about taking a local train half way either on the way out or back so you don't quite so far to cycle? If you are a person of leisure and don't have time constraints, why not make your cycle tour France a round trip? No planes trains boats or automobiles?
"Zat is ze reel prowoking qwestion Mr Paxman." - Peer Steinbruck, German Finance Minister 31/03/2009.
Top

If the ferry does not take bikes - try turning up in good time, there will be lots of camper vans waiting, ask if someone will take you along. There is often a packet price for vehicle and all inmates.
Entertainer, juvenile, curmudgeon, PoB, 30120
Cycling-of course, but it is far better on a Gillott
We love safety cameras, we hate bullies
Top

I had no problem Portsmouth to Bilbao with my bike but that was years ago. And yes, I had to have a cabin. It was 2 nights and a day for the crossing.

I came across this problem taking a ferry from Birkenhead to Dublin. The problem was health and safety accessing the boat - couldn't get on as a foot passenger because of the bike, but not allowed to walk the bike onto the vehicle decks either. They had me put my bike on a minibus and drive me onto the ferry, but I don't think they're supposed to do that.
One link to your website is enough. G
Top

Ivor Tingting wrote:...I was told by their sales operator no bicycles on this service no exception...

We are able to transport your motorcycle or bicycle securely on all our cruise and high speed service. We can also accommodate the following specialist vehicles on board our ferries.
(My italics - Link)

I did wonder if that might exclude the économie services (leaving Portsmouth on Saturday mornings) as they make a definite distinction between them & the "Cruise" services.

But I have just tried going to the online booking and get prices for both ways with a bike on the Portsmouth-Santander route both cruise & économie (for random dates in May). 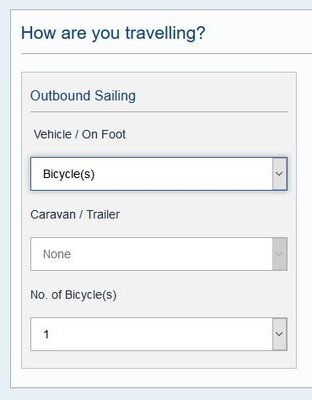 Think it might be differentiation between BF 'economie' and 'cruise' on this Portsmouth-Santander route!
Attempted to book, on line, economie for early May '17 and kept generating error message. Phoned up to be informed that no automatic on line bike option on economie but could be made available at the web £60 single crossing rate. However no option for a reclining seat (my preferred option) cabin only at additional £100 = £160 total for the one way journey.
So instead have now booked single crossing, cruise option at £100 for later in May on which sailing the reclining seat is available at £10 addition, making a journey cost of £100.
Top

Has anyone tried taking their bike on the Euskotren its the basque narrow gauge railway that runs from santander to hendaye?
Top

This CGOAB journal by Beekeeper, a member of this forum, took his bike on the train from Bilbao to Hendaye
https://www.crazyguyonabike.com/doc/?o= ... 12400&v=PB
Top
Post Reply
24 posts