I have seen the previous thread about Flixbus https://forum.cyclinguk.org/viewtopic.php?f=16&t=114878 and note that folks didn't book because the booking system showed that there were no bike spaces available. I'm presuming that this was for services originating the UK and that these services don't have provision for any bikes.

I've been trying to book a journey (with bike) from Berlin to The Hague (nearest station for the HvH - Harwich ferry) and can't seem to find how to book a bike space without committing to payment for a seat. Has anyone had any success travelling with a bike on Flixbus?
Top

Surely you have to book a seat? Whilst in theory you can turn up and buy a ticket i'd be wanting to book a ticket so I got on the journey I want to travel on.
Convention? what's that then?
Airnimal Chameleon touring, Orbit Pro hack, Orbit Photon audax, Focus Mares AX tour, Peugeot Carbon sportive, Owen Blower vintage race - all running Tulio's finest!
Top

Book a seat ... and then find out there are no bike spaces? No thanks.

Should be able to book both seat and bike space together. Should.

The website https://www.flixbus.com/ looks like there is a bike and seat booking thingys Berlin to The Hague.
The website gives seat reservations .. and rejects schedules where no bike slot is available ... so looks to work.

There is a contact page .. talk to them?
https://www.flixbus.com/company/contact-us
Top

OK, I now understand where I was going wrong.

I should have counted the bike as a passenger (obviously...). The search query then returns only the services that have bike spaces available.

Here are my recent experiences travelling with a bike on Flixbus. I took Flixbuses from Paris to Trento via Munich, bike-toured for a while in Italy and Austria, returning via Flixbus from Munich to Paris.

Booking: As the early posts in this thread mention, the bike is treated as a passenger. Click under Passengers where it says "Adults: 1" and you have the option to add a bike. Unfortunately it seems relatively few of the routes offer bike carriage, and there's no easy way to find which do/don't. You just have to try and book with a bike, and see whether each service offers "Reserve 1 seat" or shows "There are no bike slots available". I booked three tickets with bike carriage: Paris-Munich, Munich-Trento and Munich-Paris.

Boarding: It was little bit chaotic at Paris Bercy bus station, I had to ask which bay my bus would leave from as there were no display boards. Munich was better, they have signs above each bay with the number and destination of the bus. All three buses ran on schedule. I read some horror stories online about rude and abusive drivers but mine were all polite and friendly although didn't speak much English. Each of the buses had two drivers. As I had a bike, the drivers wanted to deal with the regular customers first, so I had to wait until last. After dealing with the main queue of customers one of the drivers eventually turned to me and loaded my bike onto the rear-mounted rack (Paris-Munich and Munich-Trento... I'll deal with Munich-Paris separately). The first bus had a rack where 4 bikes were hung vertically by front wheel from a hook, the second had a more conventional Thule 4 bike horizontal towbar-mounted rack. Of course, being external racks, the bikes are exposed to the weather, and I probably should have protected my dynamo light with a plastic bag, it went a bit awry after the first journey in heavy rain. 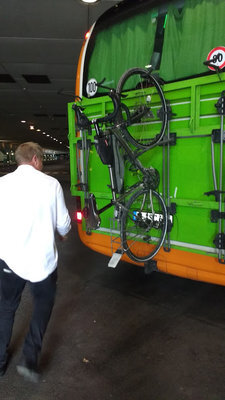 The journey: Coaches are of course less comfortable than train, and in particular, the 12-hour trip from Paris to Munich was gruelling. But there is a decent toilet on board, the seat backs have USB charging ports, and the seats are reclining. It was very hot on two of the journeys, the air conditioning didn't seem very effective. Every trip had at least one 20 minute rest break at a service station. Services ran on time. There was no problem retrieving my bike at the destination stop.

The big disappointment: I had booked with bike on the return trip from Munich to Paris, but about 36 hours prior to my expected departure I received a text, in German, telling me that the bike facility was no longer available. Of course this was a massive disruption to my plans; I had onward connections from Paris-Caen and ferry from Caen-Portsmouth so any delay in getting back from Munich to Paris was going to cause me to break those bookings and lose a load of money. I called Flixbus and they were polite and offered to refund my fare or offer a later booking but absolutely unwilling to offer any compensation for the broken onward bookings. I explored numerous alternatives including local trains (8 connections from Munich to Paris) but it would have cost something like 180 Euros, and involved missing a night's sleep, to reach Paris in time to hold my onward bookings. I called Flixbus again, this time accepting I would have to book on a later service and lose the onward segments. As it turned out they could not offer a direct service from Munich to Paris for several days, so it was looking bleak. Then the assistant offered an alternative: dismantle and wrap the bike and it could be carried as oversized luggage on the original planned service for the same cost. This was still stressful as I had to find wrapping materials at very short notice while continuing my tour, but it was the least-worst option. I was able to find bubble-wrap, clingfilm, tape and pipe lagging in Zell am See, skip a section I had planned to cycle by taking a local train, wrap my bike at Munich bus station in advance of the 0645 departure, and the luggage option worked out fine. But it was a super-stressful experience. Oh, and the kicker: the bus appeared to have a perfectly serviceable bike rack.

Summary: Given how complex it is to plan European long-distance travel by train, Flixbus seemed to offer a really useful alternative to trains, albeit for a limited set of routes. If I hadn't had the difficulty with the return leg, I'd probably be recommending it. But - even though it turned out ok in the end - the last-minute cancellation of my bike transport shook my confidence in the service. I'd say buyer beware.
Top

A part of the problem is that whilst Flixbus are German most of the international (read outside Germany) have been taken over from other operations or are in conjunction with others. (as previously mentioned journeys from London are actually the pre Flixbus Eurolines services - similar arrangements have allowed the network to grow very quickly)

So travel within Germany you will have less issue taking a bike than the cross border services.

Be interesting to hear from anyone else who has used them (or other coach services with a bike).
Convention? what's that then?
Airnimal Chameleon touring, Orbit Pro hack, Orbit Photon audax, Focus Mares AX tour, Peugeot Carbon sportive, Owen Blower vintage race - all running Tulio's finest!
Top
Post Reply
6 posts • Page 1 of 1