There's a bit of an problem with the suggested route from Devizes to Warminster. It goes through the army Imber live fire range. Great route but has some objective hazards, tanks being one. Used to be open for all of August but due to moronic behaviour this is now only 3 days.
Top

I was playing last September, using cycle.travel on my phone to navigate back from Watchet to Gloucester. Obviously, for much of the route there's no data, and my plan isn't generous enough anyway, so what I did was set up the route at the start where there was wifi, and pan along the route at a couple of suitably chosen scales so that the OSM tiles were cached on the phone, then set off leaving the application open, and just pulled it out of my pocket and had a look whenever I wanted guidance.
That worked fine for about half the ride, but after that the cached tiles expired and vanished.

Is there any control over what life is set on the cached tiles, and if so, could it be stretched to 12 hours or so?
Top

What was the moronic behaviour ?
Top

During the open season most of the roads and trackways are closed with signs and barriers to keep you safe from unexploded shells, etc. People were still driving on the closed areas. In the deserted Imber village some people went into buildings and vandalised them. The Army don't have enough range wardens so has closed the area off apart from August BH. I drove through there on BH Monday at gone 6pm and there were about 7 older London buses full of bus nerds at Imber. I expect there were thousands of people there in the day.
Cycled through there 8 years ago and it was heavenly - only a few people around.
Top

Bmblbzzz wrote:But recently someone was complaining to me about the route sheet on an audax they'd ridden; that it was full of misleading instructions, such as straight ons being labelled as right turns, and other instructions were missing altogether. They told me they reckoned it had simply been printed off a routing app without any checking, and I reckon (though I didn't ride this event) that might well be right. I'm pretty sure it wasn't done with cycle.travel, but just thought I'd mention this as a general point about turn-by-turn instructions from mapping.

It's a problem with pretty much all bike routing. The issue is that most map databases don't seem to have consistent information about which road has the priority at a junction (or, to put it another way, where the white lines are painted). So the route-planner has to guess. Principally it does that from the geometry, so if there's something that's pretty much at 0° then it'll say "straight on" whereas if it's at 90° it'll say "turn right" - which might be accurate, but often roads go sharp right at junctions without a turn being required. It's that sort of scenario where you'll see missing or superflous turns.

captain offensive wrote:Hi Richard. One little thing id love to see on the pdfs if possible would be the five mile markers you get on the website. They are useful to find out how far along one is. I normally end up adding them onto the print outs. Cheers

climo wrote:There's a bit of an problem with the suggested route from Devizes to Warminster. It goes through the army Imber live fire range. Great route but has some objective hazards, tanks being one. Used to be open for all of August but due to moronic behaviour this is now only 3 days.

Hmmm - which road is that? If I ask for Devizes to Warminster it sends me down the perimeter Imber Range Path which I thought was still open; but if I ask for a circular route then the return leg goes over Sack Hill etc., which looks more suspect. Is it just the latter or both?

andrew_s wrote:Is there any control over what life is set on the cached tiles, and if so, could it be stretched to 12 hours or so?

Good thinking - that hadn't occurred to me. I've just stretched it a whole bunch more than that - given that the map is updated every month there's no reason not to cache for longer. Takes a bit of stress off the server too.

I've just added a feature where the turn-by-turn instructions now include 'knooppunten' - the little junction nodes in the Netherlands and Belgium which help you navigate their dense cycle networks.

Or if you prefer something hillier, they include mountain passes too!

re Devizes to Warminster.
From Gore Cross on the A360 south of West Lavington, the Imber Perimeter Path goes due west along a yellow road (on the OS map) passing New Zealand Farm where it turns into a track, south of Bratton, Westbury, etc and generally hugging the northern edge of the Plain ending up near Upton Scudamore on the A36 at Warminster. That route is open.
From Gore Cross the c.t route goes roughly south west down another shorter yellow road then track through Imber village and enters Warminster down (believe it or not) Imber Rd. That route is closed unless you really want to get shot at.
The round trip returns through Imber village, crosses the A360 at Gore Cross, past Market Lavington to Urchfont. East of Gore Cross is open.
Top

Thanks - I've just fixed that on OSM so it'll show up on the next c.t update.
cycle.travel - maps, journey-planner, route guides and city guides
Top

Richard
Just looked at the route from Devizes to Stonehenge and its routing through the Larkhill Ranges which are sometimes closed to civilians. Better to go as directed to Durrington then Larkhill village and Stonehenge. On weekends the Larkhill Ranges are likely to be open. I expect the the 1000's of troops relocating to this area may mean more usage of the ranges.
Top

Would it be possible to specify a map scale for the pdf maps:

And perhaps also the amount of surrounding non-route area included in map?

The scales are pretty much:

I'll look at adjusting the amount of space around each map - my gut feeling is that there's usually not enough at the moment, but it should be possible to improve that. It could also do a better job of fitting multiple maps onto one page!
cycle.travel - maps, journey-planner, route guides and city guides
Top

I used cycle.travel for my last trip down to Dorset from the Highlands this last October.

I cannot really fault the planner, it does as it says and routes you away from the busy A roads (which can at quiet times be a bit of a detour but that's by the by).

There was one occasion, very early in the morning about 05:30 after setting out from Telford towards Chippenham where I was met with a closed gate & 'warning - private' sign. This was a bit of an annoyance as there was a reasonably long day ahead, it was pitch black, raining and I was having a job finding a re-route.

I was just wondering why it routed me down that lane?? It appeared to have been closed for quite a while. Here's a screenshot, maybe somebody local could elaborate 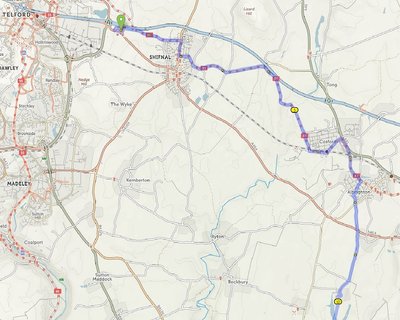 The path was closed around about the 10 mile marker, near the pond/lake. I recall there being a churchyard nearby and some posh apartments but it was all a bit dark to notice much.

Just had a look! Basically the lane wasn't marked as closed to bikes in OpenStreetMap, so cycle.travel thought it was ok to route along there. (There are a couple of classes of road in OSM which are a bit ambiguous as to what's allowed along there - that's one of them.)

But I think I can make cycle.travel take a better guess in these circumstances, so I've just changed a couple of things and it should no longer choose that road when I next update the routing. (I've just done an update, so the next one will be in a month or so's time.)
cycle.travel - maps, journey-planner, route guides and city guides
Top

This is such an incredible resource. There is a new housing development in Radstock which has caused a few ‘real world’ issues on NCN 24 through the town. It has also meant the routing on Cycle.travel wasn’t perfect.

I had been meaning to add this to Richard’s giant to do list, but I have just looked and it is spot on. Maybe even before the new NCN signs and Tarmac have had time to dry.