On this day 9-years ago I completed my tour of the D-Day beaches in Normandy, France. It was an interesting and at times very moving trip, especially on 6th June and I just wanted to record my experience and thoughts here today 6th June. The story of my ride can be found here on my blog:

It would be interesting to hear from others who have toured this area and their experiences.
https://roundthebendpart1.wordpress.com/
Top

Here's my Mercian at Arromanches in the 1980s when we were in Caan with HMS Sirius. I took a ride-out one day and visited the Bayeux Tapestry and the Normandy beaches. 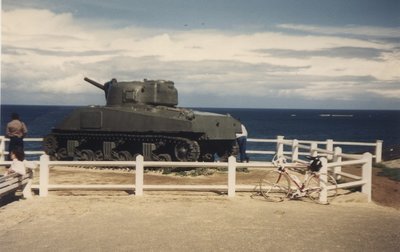 I very recently returned from a pilgrimage to visit the landing site (Ranville) where my father covertly dropped with the "Pathfinders" (22nd Independent Parachute Company) on the eve of the D-Day landings. Their mission was to place radio beacons and landing lights to guide in the Airbourne assault and then to assist in the taking of the Merville gun battery.
Followed was a very enjoyable ride back to Cherbourg via the landing beaches, the French were putting on a good show of their appreciation.
To stand alone in the graveyards of Ranville and Bayeaux was a very moving experience! 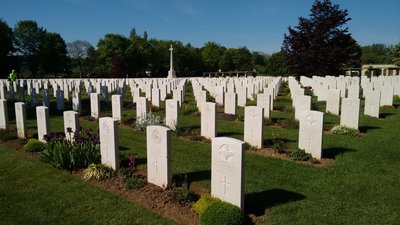 In 1989 myself and 2 friends made a trip to France to join in the 200th anniversary of the French Revolution. We were in an old VW campervan, with early MTBs on the back. We visited Suisse Normandy and had a jolly time with bikes and hired canoes. We also took part in the local towns celebrations, the highlight of which was a large open air sit down meal attended by most of the population.

On the way back to Ouistreham, I wanted to call in to see the Pegasus Bridge. My friends weren't keen, but I was driving. As luck would have it, we turned up just as Major John Howard was entertaining a tour group in the 'first liberated cafe'. The old lady patroness was also there. A bit of pure serendipity and even my friends were impressed.
Top

Hello Simon,
The Café Gondrée of your story, an interesting museum in its own right. 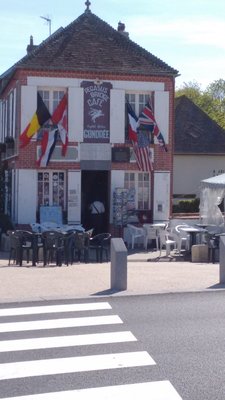