I'm planning to cycle from Munich to Venice in July and I'm considering a couple of options after crossing the Brenner Pass and descending to Brixen.
Option 1 is to head South West to Bolzano, Trento, Lake Garda and Verona before crossing to Venice via Vicenza and Padua.
Option 2 is to head East to Brunico and then South via the Dolomite Railway cycle Path, before touring some of the Veneto region before finally heading to Venice.
Does anyone have any experience of either of these routes and recommendations as to which would be the nicest route in terms of scenery, traffic free riding, interesting towns to stop off in? Also any recommendations for places not to miss will be greatly appreciated.
We will be staying in hotels, agritouristi, B&Bs, so campsite availability is not an issue.
Top

Andy, as you probably know there are several long distance cycle routes in that area.
The Alpe-Adria Radweg starts in Salzburg & goes to Grado.
There's one linking Munich to Italy as well - the name escapes me.
Biroto.eu is good for long distance routes in Europe.
CrazyGuyOnABike for journals - it has a great search function.
RidewithGPS has a useful search function too for finding the routes of others.

I did the Alpe Adria Radweg, then Venice & Verona, over the Brenner pass & back to Salzburg. I avoided Lake Garda as everywhere was so busy!

My recollection is that the AA route was easy to follow, but making my own way in Italy was far more challenging. I recall attempting to follow another cycle route but the roadsigns stopped after the first one! Perhaps a bit chaotic, but fun nonetheless. I enjoyed cycling in Italy (not so much the towns and cities) as traffic was very respectful.
All the big places (Verona, Venice) were jam packed and not pleasant for me.
(You cannot bring your bikes into Venice, by the way).

This is the Munich to Venice route

I've done some of it when I rode from Vienna to Venice (Mestre). The route linked often followed a former railway line. The sections in Austria were better surfaced and signed that those in Italy. I can't remember all of it. I can recalled the off road section into Cortina d Ampezzo was not great. It was wet and Mrs Whoof struggled with 35 mm touring tyres. the road parallel to it was quiet and would have been better. It was late June and Cortina was barely above freezing. We stayed in a hotel.
Once out of the mountains it was warm and we camped. Nearer to Venice it got to 38 degrees.
There wasn't a campsite in Treviso so stayed in a B and B We got from going to the tourist information.
We stayed at Camping Rialto in Mestre in a chalet. This was a hut with two beds and electricity. They are packed in a lot closer than in the pictures on the website. We could just get us and Two bikes and luggage in and have a semi secure place to leave the bikes whilst in Venice. Cheap regular bus leaves right outside the site and there's a Lidl opposite. Also short day ride to the airport.
Top

If you go the eastern route, they announced a new bike route called ciclabile del Piave, which is a river. From Cortina you can go to Belluno and should take you to Jesolo.
I have not done the route, so cannot say good or bad.
I wish it were simple as riding a bike
Top

... not indeed existing, except for pieces already existing even before this sort of "internet announcing"

I did the Munich-Venice route (the one which Whoof linked to) last September. I took the eastern branch between Munich and the Austrian border, which was very pleasant (esp. round the Tegernsee). The ride down into the Inn Valley has a stretch of gravel hairpins which were a bit tricky going downhill (might be one of those cases where it would be easier going uphill!). There's a killer ascent out of Innsbruck (on quiet roads, though; and it could be skipped by train if necessary), but otherwise the Brenner pass is fairly easy, and not too busy (there's some tourist traffic, but most of the cars/trucks are on the motorway). On the Italian side of the pass, there's a long section of really excellent traffic-free paths (lots of them converted railway lines) -- though I agree with Whoof that the stretch into Cortina isn't great, esp. in bad weather ('white roads' which just turn to gloop in the rain; if I came this way again I think I'd just stick to the road, which runs more or less parallel and which wasn't very busy). The section south of Cortina was spectacular, though, and very well surfaced!

For the last bit, I took the longer route via Jesolo, which I enjoyed: it's easy riding, mostly on quiet roads or paths. I liked Treviso: an interesting and attractive city, and about a billion times less frantic than Venice. Once you get to the end of the road (at Punta Sabbioni, beyond Jesolo) You can take bikes on the vaporetto over to Lido (and from there on the car ferry to Piazzale Roma, if you want to bus/train back from Venice -- you're allowed to push a bike from Piazzale Roma over to the railway station, but no further!).

Overall: it isn't, I think, the most scenic route through the Alps (the Brenner pass won't win any beauty prizes...), but the section through the Dolomites is wonderful (and remarkably easy riding, too), and there's lots of really pleasant scenery and nice small towns/villages.
Top

Thanks to all who replied. Together with some of the blogs on Crazy Guy on a bike I'm building up a picture of what to expect from the different options.
Top 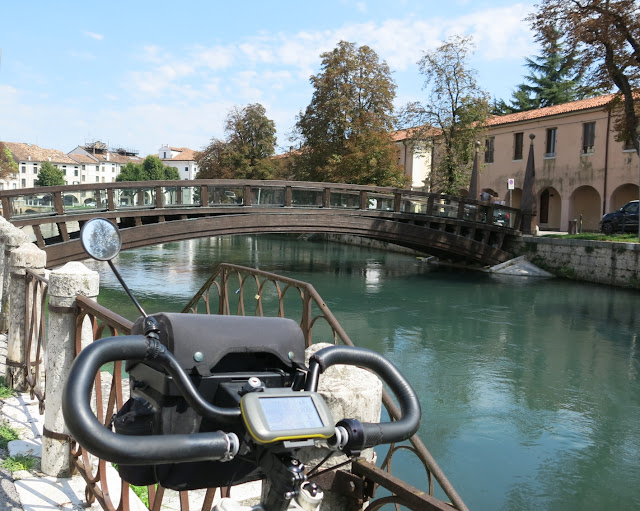 ... not indeed existing, except for pieces already existing even before this sort of "internet announcing"

Too bad. I guess it's like the Alpe Adria. When it started it was more road than path, but now they have a large portion on path. The problem now, it is much too popular and very crowded on summer days
I wish it were simple as riding a bike
Top

There must be a very clever internet algorithm capable of building up and appear so far as real non-existing things.
One of these things is the so called “Ciclovia del Piave”.
Here below my personal experience, August 2019, 200 km … generally quiet roads but not even one centimetre of a whatsoever real cyclepath

Along the Piave front - AUG2019
A simple itinerary of about 200 km in which the natural beauty and variety of the landscapes surround the richness of history and stories that had Italy as a protagonist especially at the end of the First World War (1915-1918).

ConRAD wrote:There must be a very clever internet algorithm capable of building up and appear so far as real non-existing things.
One of these things is the so called “Ciclovia del Piave”.
Here below my personal experience, August 2019, 200 km … generally quiet roads but not even one centimetre of a whatsoever real cyclepath