willem jongman wrote:a bike that, to me at least, seems to be the optimum compromise between the different demands

Something which is not often executed as well as you and M-gineering have done with your bike.

I think my optimum compromise would only differ from yours in wanting 27.5"/650B wheels instead of 26". I find 29" MTB and wide 700C touring tyres much better at rolling over bumpy tracks compared with 26" MTB tyres, but I think on a gravel tourer* 27.5"/650B would probably be the best compromise for me if using tyres as wide as 55mm, e.g. fewer difficulties with achieving the necessary clearances and avoiding/minimising toe overlap.

I wonder if you might prefer them too based on your experience of riding over those "really rough stretches of very coarse gravel". Moreover, the choice of nice 26" tyres is shrinking whereas 27.5" is increasing, e.g. Schwalbe have discontinued the Almotion in 26" and are now making it in 27.5".

When this bike was built there were no serious 650B/27.5 touring tyres, and to be honest very few wide 28 inch touring tyres, so the decision was easy. I honestly do not think a slightly larger tyre would have rolled more easily over that nasty gravel, but I don't know. What I do know is that unless you are a tall guy, a bike with wide 28 tyres will be too large for a comfortable geometry. And if you are a quite small woman, and/or live in a poorer country where people are shorter, the same applies to a wide 650B tyre. I certainly do not have the clearance for anything larger than 26 inch on a bike like this. So I am rather annoyed by the current neglect of 26 inch by companies like Schwalbe. My hunch is that a large proportion of their production goes into OEM sales, where the large bicycle manufacturers have to follow fashion, and only cater for affluent tall white men. When I saw this coming I bought a good supply of 26 inch Almotions, so I should be fine for quite a few years. As a bonus, these are actually more comfortable than the new incarnation of the Almotion with stiffer sidewalls than mine.
Top

willem jongman wrote:a bike that, to me at least, seems to be the optimum compromise between the different demands

Something which is not often executed as well as you and M-gineering have done with your bike.

Judging from the one photo and Willem's description it doesn't seem a mile away from the current version of the Thorn Nomad, though they have maybe gone a little over the top to make it all things to all people.
Top

I rather guessed that 26" would have been the obvious, if not the only choice when your bike was built. It does not surprise me that you have stocked up on tyres. It seems that if any components are especially good for touring bikes, they will soon be discontinued, whether that be tyres, rims suitable for rim brakes, various 7/8/9 speed derailleurs and cassettes or Shimano hubs with steel axles. Rohloff often seems to be very much an exception.

willem jongman wrote: I certainly do not have the clearance for anything larger than 26 inch on a bike like this.

My comments about wheel size are based in part on my Spa Wayfarer, which is a traditional 700C tourer but with clearance for fairly wide tyres. I'm 5' 10" / 178cm tall and the frame is a 54cm size, and I am currently using 50mm Marathon Supremes (actual width is about 46mm), with full mudguards (and good clearance between the tyres and mudguards), and there is no toe overlap (but only just) with my 9.5 / 44 size feet.

I think the Wayfarer is probably close to one end of the spectrum in terms of geometry (long wheelbase, shallow head angle and large fork rake), and I imagine some will like it but others won't. It might be that it would not handle as well when very heavily laden compared with your bike or the Surly Trucker models - I certainly would not be able to make a judgement about that, because I've no plans to ride it with panniers (I ride with a saddlebag which might have up to around 6kg in it).

As you indicate it's all about an optimum compromise for the individual, and I currently think a wider tyre like a 55mm Almotion in 27.5"/650B would be the slightly better compromise for me, with no extra advantage for me in reducing the wheel size even further to 26" and possibly only a disadvantage in it not rolling as well over bumpier surfaces. If I had the opportunity to ride many more bikes with different geometries, maybe my opinion would change.

willem jongman wrote: am rather annoyed by the current neglect of 26 inch by companies like Schwalbe. My hunch is that a large proportion of their production goes into OEM sales, where the large bicycle manufacturers have to follow fashion, and only cater for affluent tall white men.

I thought the Dutch were all affluent tall white men (or women).

Not everone is tall. At 177 cm I am average for my age cohort, but current average for the young has gone up to 183 cm. The average for young women is 168 cm if I remember correctly, but my wife is 163 cm. So for many women 26 inch wheels are highly appropriate. We decided to standardize on that size.
And yes the bike shows some similarities to older Thorn Nomads, although it is obviously a far more refined build. The bike it replaced was in fact a Thorn, a Voyager childback tandem, a really excellent bike and great for the purpose.
Top

The main reason I went for the 27.5" tyres on the mtb was popularity = availability ( lesson from my retail days there's strength in numbers ) but still think the 26" is better for my size ( around the same as you )

Putting the 2" schwalaby big Ben 'roadish type' tyres on it made it a great Tourer since I'm more and more on paths, bike trails for the very reason mentioned above ( increased faster traffic ) and it can take a load of weight.

I still enjoy the quieter roads too on this bike. I could travel on it all day long. The R2 is good too if I want to travel further in less time.
Top

I have found all your advice and comments really helpful and enjoyable to boot. I have taken a number of bits of advice and I'm really happy with the result:
Same Condor Heritage frame, because I really enjoy riding it, but in a smaller size and disc brakes. Have found this much more comfortable. Not yet sure about the disc brakes as they haven't bedded in properly yet as it's been too cold and miserable to ride very far. Cycling to work through snow and ice I appreciated the more subtle modulation to avoid locking up the wheels.
Wider tyres: 35mm Schwalbe G1 All Round. A much gentler ride and much more fun on gravel/tracks. Put them on the old bike first and the rear showed wear pretty quickly so will change them for Panaracer Gravel Kings in the same size.
Handlebars changed to Salsa Cowbell - very easy to get a range of back-friendly positions.
I started to get nervous about the carbon seatpost now there's more clear of the frame, having heard various tales of serious injury so changed it to a titanium one from Spa. Indulgence. I have no idea if it absorbes more vibrations than an alloy post but I feel it does.

Now I can't wait to take it on a multi-day tour and, with any luck and vaccine or two, LEJoG in the summer. Thanks again for all the thoughtful and intelligent comments.
Adrian 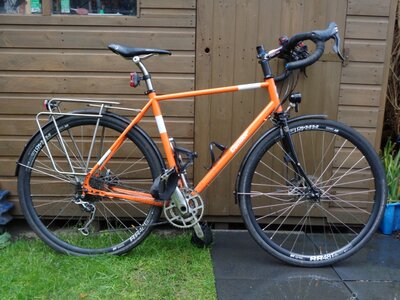