As pwa states, the desirability of coastal roads for cycling varies greatly. We have a static near Tywyn and Ride often in the area. The roads there run to extremes:
- from the Dyfi bridge at Machynlleth to Aberdyfi is either fast but narrow or windy and narrow. It is the kind of A-road where drivers try to go faster than the road condition allows. We often see drivers making close passes here on cyclists
- for a few miles north of Tywyn there is a delightfully quiet route on minor roads, with a foot / cycle bridge over the Dysynni estuary. The minor road soon cuts inland, joining a now-wider coast road to Llwyngwril and Fairbourne. There are spectacular views here and the road is a bit wider but I’m not sure I would call it a leisure route

I’ve heard good reports about the NCN along the N Coast but ridden only on the bits near Conwy and Llandudo. Much of this section is either low-traffic roads or purpose-built cycle path
- as others say, by far the best bit of the perimeter for quiet riding is the inland section thru the Marches. There are any number of quiet minor roads here
HTH
Top

This is the circuit I developed for the Cicerone guidebook. 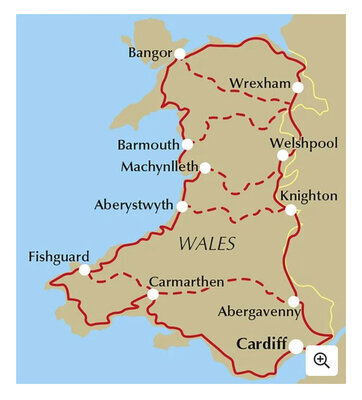 It omits a few peninsulae and Anglesey either because their roads are dead ends and don't form a loop or because including them would make the ride too long for a 2 week outing. It also omits Monmouth in preference for the must-do Gospel Pass. However it does outline potential routes around Anglesey and the Lleyn Peninsula that could be included.

In a number of places the route goes inland to avoid busy A roads such as between Tywyn and Machynlleth and wanders briefly across the border to avoid a few lumps south of Chirk. It also cuts across Maelor which is that finger of land east of Wrexham.

In all it is about 650 miles with the North and south coasts being relatively easy, the border being fair and the West Coast being the hardest, but by no means that difficult. Mainly little climbs away from the coast here and there.

Great trip that is remarkably easy to access by rail at a number of places along the border.

Enigmadick wrote:This is the circuit I developed for the Cicerone guidebook....

I must get a copy of that, Richard, though I expect I will do what all touring cyclists do and pick holes in some of your choices. We love to do that don't we! It looks like it comes through my home village of Wick.
Top 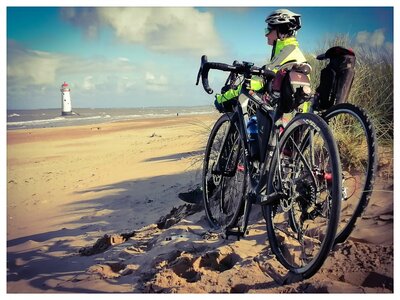 Top right corner of Wales yesterday - Talacre in Flintshire where we are currently in local lockdown. Damn good terrain to be locked down in though with a good mix of flat and hills.
ENIGMA DICK aka Richard Barrett
Top
Post Reply
19 posts