sbesley wrote:What I would like to know is how many Megabytes of data would be downloaded on a day's touring using a smart phone as a GPS and downloading the mapping as you go?

Anyone any experience of this?

I've not used it for cycle touring yet but... I drive a 70 mile round trip to work daily and have my phone (HTC Desire) on the dashboard on most days, acting as a routefinder (even though, after twenty years, I'm pretty sure of the route) using Google navigator and the live traffic overlay of the whole route. I've got a cheap tarrif (£17/month with 500MB data/month). So far this month - and it's the 18th - I've used 70MB of the data allowance and will probably use well under 150MB by the end of the month. That includes all data, not just the map stuff. By my reckoning, cycle touring should be well within the capabilities of pretty much any tarif limits.

The only thing that pushes the data limits are things like videos, and - to a lesser extent - large pictures or music tracks. But these can be downloaded over WiFi while at home or work without eating into the data allowance.
E25
Top

I've got an older garmin etrex. I took it along to Germany, Austria and Czech rep. My colleagues had detailed maps that we used and they poo pooed the garmin. I had no preloaded maps in the garmin. However my colleagues often had to refer to the garmin as a map will not tell you exactly where you are and what direction you are pointing in. The garmin stopped us getting lost in small towns and suprisingly, showed us the Danube and major roads so we could easily calculate our position. I'm sure once preloaded it could be used to navigate without maps, but in conjunction with a map I found it to be a valuable tool. Plus of course it replaces your trip computer and 4 batteries lasted two weeks.
Nothing left to prove.
Top

After the initial joy of getting a GPS it quickly becomes apparent that it isn't as easy as you think. The guide book that comes with it is as thick as a bible and just as difficult to understand. A GPS is like a mother in law, initially your very nice to each other and very polite, later the misunderstandings start, you dont listen to it when it tells you something, because you assume its wrong and your right. Then the long silence starts, followed by a little give and take, talking, then slowly you start to accept each other and respect the others point of view (however obserd it can be).

I see many advantages to a GPS but often its just a heavy battery slurping bike computer, but I'm still going to take it with me to Africa (because I'm assuming by then we'll understand each other and I won't need to throw it out the attic window in frustration)."

And thats all I have to say about my etrex

Finding your way around using tiny touch screens on your smartphone and GPS units is so yesterday, judging by an article I have just read in the Sunday Times.

The future is Augmented Reality Glasses, that go on sale later this year. So you can have all this stuff on a head up type display on the glasses which overlays an image, so you can see through the glasses but still see the info; borrowed from military technology.

They will (do) plug into a smartphone or tablet and you can cycle along with a map (I guess) projected onto the inside of the glasses. You will even be able to play virtual computer games in the real world. Adverts for local businesses, such as restaurants will appear on the head up display, as you approach. You will get Twitter feeds and Facebook of course. It is predicted that there will be a huge growth in the development of apps for these devices and prices will come down.

So there is the future, head up displays plugged into the internet as you ride your bike.

The company marketing these glasses is called Vuzix

This is all discussed at length in this forum:

To repeat what I've said there, don't necessarily be put off by the map traditionalists. I use an older 'smartphone' with bluetooth GPS to tour with and it's awesome. I do pre-plan the routes on Bikeroutetoaster (I don't think it's boring!) and upload them to the phone where I use TomTom software to navigate. Each morning I pretty much load the route and press go - the rest of the day is spent concentrating on the scenery and riding rather than looking at the map or roadsigns every 5 seconds or wondering if you missed a turn a few miles back. It also allows you to choose flatter, less busy and more scenic roads which enhances the whole experience of bike touring. For the record I plan the trip very precisely on the computer so as to take out the surprise element of autorouting while in the field. Here is the setup: 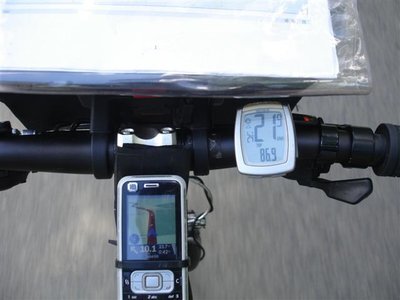 I take a load of Nokia batteries (cheap off ebay) and just swap them when needed. I usually get about 3/4 of a day out of each and then recharge them using a (also cheap off ebay) wall charger (image below). This charges the bluetooth GPS unit over USB at the same time as a nokia battery and the whole system is really lightweight. 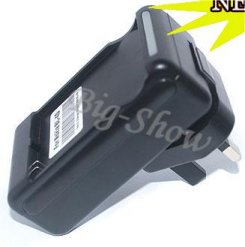 Ultimately just do what you feel comfortable with. If you choose the satnav route, just be careful of the potential pitfalls (e.g. battery life, errant autorouting). Personally I wholeheartedly recommend touring this way though. It's seen us through many thousands of miles through foreign lands with no sweat.
Top

Couple of things.
1, phone network coverage isn't universal everywhere even if the uk is pretty well covered
2, Maps used by GPS devices are not always comprehensive; it depends on where you are. Some countries just have cities and main routes between them
3, Getting physical maps can be awkward if your crossing a border in a rural area.
Top

Good points above, however:
1. the system I use doesn't need phone coverage at all - all maps are on the SD card. In fact I switch the phone reception off to save battery.
2. Maps for TomTom are generally really good, displaying all minor roads (and in some cases a bit too minor e.g. dirt tracks!). They also cover a good chunk of the world, though admittedly mostly just developed nations.
3. Amen to that! I print out google map sheets. Sure, not as great as a proper OS type map, but it has enough detail to get you there. Also, google maps now covers nearly all of the world. I've even found some remote roads I've travelled in Ethiopia shown on there!
Top

I plan beforehand too via Google Maps. Drawing out the routes, and chucking them on my Garmin GPS. I don't always cycle the exact route, but it acts as a guide and means I barely have to stop. I quite enjoy the planning and during it research areas and places I want to see. I'm all for being spontaneous but at the same time I'd hate to cycle through an area and miss something through not doing a little planning.

It also marks out pubs, banks, atms, post offices etc... which is really handy. The downside as people have mentioned, is the viewing space. If I do need to detour, or see elsewhere it's a real pain on my Garmin Edge 705. And there's just something nice about using a map. Maybe taking both gets you the best of both worlds.
Top

I use a Satmap and find it completely liberating. I usually plan a route online and download it to the Satmap as a .gpx file, then off I go. I know exactly what the route will be like, and if I want to take a detour I can, knowing that I can find my way back to the route easily enough. A few times, I've just set off and followed my nose, which is fine too, though I always get more out of a ride if I've planned it. I used to have to stop every five minutes and check the paper map or I'd simply get lost. Either way it was very slow and frustrating, and as a consequence, I tended to do the same route over and over again. With the Satmap, I've discovered lots of new rides.

I bought the Satmap primarily because it comes with OS mapping -- also because it is rugged and waterproof, has a good bike mount, a big screen and a long battery life. I would never plan a route on it unless I had to, but as a way of following a route, I think it is unbeatable. Then again, I have absolutely no sense of direction, cannot carry a route in my head, and used to get lost with depressing regularity. The Satmap may be no better than any of the Garmins or smartphones (though I have to say the smartphone I use has terrible battery life and would not survive a downpour), but it changed my cycling life and I heartily recommend it.
Top

Does anyone have experience of the MemoryMap Adventurer 2800? These are on offer at the moment and include full UK OS Maps at 1:50000.
Top

Many thanks for all your help.

I had decided to stick to paper maps, plus compass, also using Mapyx Quo to print out route specific maps. I also decided to invest in a map holder for the bike, so I can see a map easily. I like their charging policy on buying maps - you only have to buy what you need, and tiles are sensibly priced.

Then some inquiries I had already made led to an almost new Lowrance Endura at an irresistible price, so now it is definitely a case of belt and braces.

Hoping to go out tomorrow and try both above combination, once some urgent domestic things are sorted out.