I have just returned from our annual cycling sojourn to Normandy. I discovered the joy of voises vertes when I cycled to Paris in 2008 using the Avenue Verte south of Dieppe. It was nothing short of a revelation but having sped along the track in a few hours I was concerned that there was possibly more to the area that I had missed, so went back shortly thereafter and have been going back regularly ever since; the cycling, scenery, areas of interest etc are just outstanding viewtopic.php?f=16&t=27359. This time therefore we went to explore some of the other voises vertes of the Seine-Maritime and Eure regions http://www.voiesvertes.com/htm/departement27.htm , which went very well but has led me to some conclusions about the voises vertes. Naturally we finished at our regular Martigny campsite south if Dieppe once again and was all the more poignant this time as it coincided with reading the final chapters of the book Dieppe: Shame & Glory by Terence Robertson (kindly given to me by another member of this Forum) about the failed Canadian raid on Dieppe on August 19 1942; a visit to the Commonwealth Cemetery and some of the battle sites is a must if you go there.

I’m still recovering from a knee operation earlier this year and the trip was intended as a compromise between doing nothing and touring, which I’m not yet up to. The plan was to drive to each area, establish a camping base and then undertake modest day rides of 25 to 30 miles based on each voie verte, where possible venturing out into the surrounding area.

A summary of the itinerary will I hope set the scene and provide information for others wanting to go:

Part-1: Pont-Authou to Evreux. We camped at the Les Marrionneirs municipal site at Pont-Authou located south-west of Rouen, less than two hours drive from the Dieppe ferry. This turned out to be a very nice site, 2-Star but clean, quiet and well situated for the start of the voie verte to Evreux, which is just across the road. Because of my knee we generally did not do more than 25-miles each day but we managed to cover most of the track in two days, which is 42 km from end-to-end.

The northern section runs by the beautiful Le-Bec-Hellouin Abbey and then shortly before Le Neubourg a 1km detour eastwards takes you to the impressive Chateau du Champ-de-Bataille. Le Neubourg was a nice town but otherwise unexceptional, though the impressive church there had lots to do with WWII and the town would make a good place for lunch. As usual the track was paved and very well looked after but was mostly bordered by trees obscuring views of the surrounding areas, though that did provide some welcome shade from the 32C heat. In contrast, the southern section mostly runs through rolling countryside or flat open agricultural land until shortly before the regional capital Evreux, where it winds downhill from the plateau to the valley in which the city is located. Locating the voie verte coming out of Evreux is very difficult, indeed had we not come into the city earlier by the same way I don’t think we would have found it. 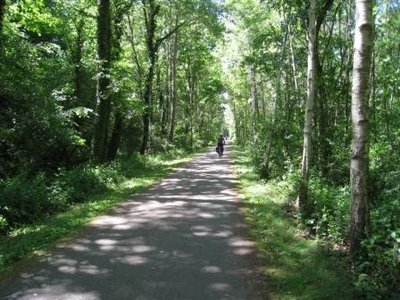 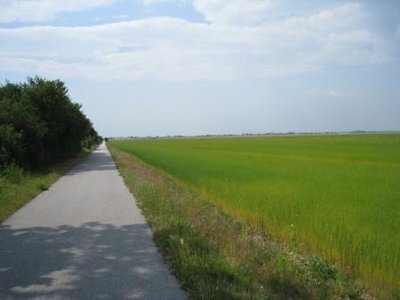 North of Evreux - Bleak and montonous

Part-2: Bernay to Broglie & beyond. Bernay was protected from the Allied bombs one night in WWII due to low cloud, as a result the buildings there are mostly original (medieval) and the town is very attractive; we also reckon it has some of the best food shops! The start of the voie verte in Bernay is difficult to find from the published information and is located about 300 metres east of the main railway station (why don’t they say so?) through a tunnel going under the railway tracks. From there it climbs gently southwards out of town through mixed woodland and agricultural land for 13 km until it finishes in Broglie, at which point at its end there is a Canadian war memorial commemorating their liberation in WWII. As the track is short we continued onwards south on the D33 to Montrieul-l’Argille and back to Broglie on the D107 to return on the track to Bernay, altogether making a very good day’s ride.

Part-3: Dangu (9 km west of Gisors). We chose to camp at the de L’Aulnaie municipal campsite at Dangu at the northern end of the voie verte from Gisor to Gasny. It turned out to be a very nice location, next to a large lake which forms part of the River Epte, along which the cycle track runs, though the village is very sleepy and any shopping (except for a local boulangerie) needs to be done in Gisor. Notwithstanding, the site was poorly looked after in comparison to others I have been to in France and a little disappointing; not terrible though and as the only campsite we saw for this voie verte there’s no alternative. This voie verte runs 28 km south-west of Gisor down the Epte river valley, generally with good views of the surrounding slopes either side, though sometimes wooded and winding back and forth across the river until finishing at Gasny. Some 5 miles further on from the southern end of the track at Giverny is located Monet’s house and gardens + and a museum of impressionist art, which are well worth incorporating into a ride of this area. After our visit we returned to the voie verte via a detour along the River Seine on the D100 which provided some outstanding scenery and areas of interest. In particular Rommel’s headquarters at La Roche-Guyon http://www.seinevalley.com/La%20Roche%20Guyon.htm and subsequently some magnificent cycling on the route de crètes and back roads across the top of the Parc Naturel Regional Du Vexin, just north of Roche-Guyon. 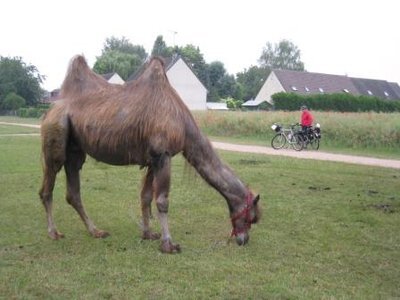 Voise Verte south of Dangu - Too much wine or we've cycled too far?

Part-4: Martigny (9km south of Dieppe). Once again we got our favourite pitch at the Martigny municipal campsite by the river, overlooking the adjacent lake and onwards to the Bethune Valley in the distance, along which the Avenue Verte runs. Despite already undertaking numerous rides in this area in the past, we managed to develop some new and equally beautiful new rides this time starting from the campsite, usually incorporating the Avenue Verte as a way to or back from each ride. All-in-all this still remains our favourite track and area for scenery, food and just general ambience, history and interest it is difficult to beat. 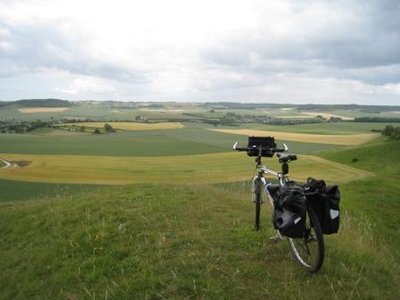 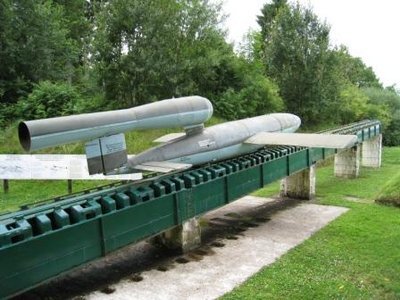 Following this trip we have now tried a number of the voises vertes in Nordmandy and I remain very enthusiastic about them all. However, despite the outstanding cycling they provide, I have now come to the conclusion that they do have some drawbacks and should be used sparingly. They can be monotonous at times, frequently missing much of the best scenery (often obscured by trees) and real areas of interest. They also tend to skirt round or entirely miss towns and villages, which means it is easy to just ride past areas of interest unless you know where to turn off beforehand; you’ll certainly need to turn off for a coffee and patisserie or shopping.

At every one of these locations we found the best cycling was almost always on the surrounding roads, often up on the adjacent hills; by their nature the voises vertes are usually located on a disused railway tracks and therefore tend to run along river valleys or across flat plateau tops. Other than as a quick route from A to B, I believe the best rides come from combining each voise vert with the surrounding roads, thus vastly expanding your horizons and providing a quick route to or from each ride, in fact it is quite a magic formula for great cycling.

I realize this is only a sample of the many tracks spread throughout France and I would be interested to hear of other’s experiences of voises vertes elsewhere and recommendations, I can’t wait to get back.

• I used the Michelin Map 304, Eure, Seine Maritime for all the rides which I found to be very adequate. The topography is not severe at any point and really IMO doesn’t require anything more than this. Of course if you do need more + contours the French IGN 1:100,000 series is best.

Prices shown are per night for a large tent + two persons, without electricity – you pay extra for each person + electricity. There would be an additional charge for each extra person of about 30% of the price shown. I did not book anywhere and found it very quiet at this time of the year.

• I also suggest Email the local tourist offices beforehand for hard copies of various maps and cycling pamphlets which they are usually very happy to forward by post and are useful for planning.

Of the voie verte i used in Normandy i found it hard to get lost, which was a big bonus, too many times on cycle paths you can simply take a few wrong turns and just give up.

I also saw camels, same as your picture, and i was in Bernay a fornight ago, i can't remember where i saw camels it may have been there.

Went on the Eurovelo 6 recently, it is a perfect example of a badly signposted track, i got completely lost on in it and ended up miles away in the wrong direction.
A Canadian i met had also used it extensively and got lost on the eurovelo 6.I know that is a bit further away than where you were, just thought i'd give examples of routes where it is easy to lose where you are going.

To some endless trees on a cycle route are eventually a bore, to me i don't mind as they are good places for camping next to.
My theory being voie vertes are relatively safe places to camp at night, with few people going up and down the routes when it's dark.
Top
Post Reply
2 posts • Page 1 of 1