have just returned from 2 weeks in portugal. flew out from Edinburgh with easyjet 5 hour delay. we had planned to take the bikes by train to Evora and then start cycling - but - could only take the bikes on the slow stopping regional trains.However, no problem taking them on the airport shuttle bus to train station. Anyway, unable to take bike on intercity train, and very hot, we changed plans and went over the estuary on the ferry then by commuter train to Setubal, camped by coast -swam - relaxed. Then took ferry over the Sado estuary and cycled via Montmor to Evora great roads little traffic.We then worked our way north via castleated villages and towns cris crossing the spanish border, as far as castello branco. Fantastic cycling, great roads little traffic and courteous drivers. Best campsight was below Monsaraz owner Gary even provided us with camp chairs plus swimming pool was nice. no problem tasking bikes on slow regional train back to Lisbon - althrough we did have to change trains. I thought we would miss the connection but the guard indicated our next train to us ,and directed us to just push our bikes over the tracks to it!. Stayed in the central YHA in Lisbon only a 30 min. cycle from there to airport roads - ok early on sunday morning but would not fancy it midweek. I found it difficult to obtain detailed info. about cycling from Lisbon but having been once would definatly go again
Top

SELLY wrote:we had planned to take the bikes by train to Evora and then start cycling - but - could only take the bikes on the slow stopping regional trains.

And some days there are none... Bikes on trains is not easy in Portugal, apart from the local suburban services around Porto and Lisboa.

There is some lovely cycling in Portugal, especially in the E and N.
Top

Fill us in on the details about flying the bike out of Ed. with Easyjet, please.
Pedals off and double wrapped?

used ctc plastic bags and bubble wrap/ handle bars turned in peddles off easy compared to the boxing up. No problems with bikes by easyjet ,(cost £30 each way i.e £120 in total for the 2 bikes - more than I paid foe the flights!) book them on under the sports equipment section when booking flight. Deflate tyres staff in portugal were most insistant on this. have traveled with bikes from Ed. several times now and never had a problem. bike bag can double as groundsheet for tent.
Top

Touring in portugal on a former railway track

Brand new is the 'Ecopista do Dão'. It's Portugal's largest bicycle trail, counts 52 km and connects Viseu with Tondela and Santa Comba Dão: http://nl.wikiloc.com/wikiloc/view.do?id=1864905. Please don't criticize the colours of the asphalt (green, red and blue) 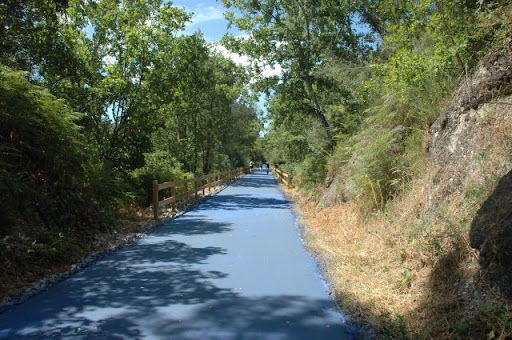 http://www.bikely.com/listpaths/by/fietslogies = 60 cycle tracks along the towpaths of rivers and canals and old railway tracks in Belgium, and the border regions of France, the Netherlands, Germany and Luxembourg with Belgium.
Top
Post Reply
6 posts • Page 1 of 1