Hi all, we will be setting off for a little bike ride early March making our way slow and steady to Australia via Central Asia.
We are after advice on the european leg of the tour, we will be going over from Newhaven to Dieppe and then making our way to the Danube.
From then on we are unsure of whether to follow it through Hungary, Romania and then onto Bulgaria, Turkey... or whether to head south from Austria (Linz) into Slovenia and along the Dalmatian coast, Albania and into Greece. For me the latter seems more appealing but i've read a few reports of the road along the Croatian coast being heavy with traffic, narrow, hilly and generally a bit hairy.
For this route is there a good way to get from Austria to Slovenia bearing in mind it will be late March by then so quite a bit of snow around i think.
As always any info much appreciated...
Top

unclebob wrote:For this route is there a good way to get from Austria to Slovenia bearing in mind it will be late March by then so quite a bit of snow around i think.

The westernmost crossing from Austria to Slovenia descends (slightly) to Kranjska Gora on the Slovenian side. This is a ski resort, which might give you a clue. The pass also has an extraordinary extended straight of 1:5 on the Austrian side, I think it is something like 2.5km in which you climb 500m. So you might want to give that a miss in March.

The next one is a long road tunnel on a major international lorry route. You probably aren't even allowed to ride that. But there is a parallel railway tunnel, if you didn't mind going under the mountains on a train.

The next few crossings are minor hill roads, until you get to the road that follows the large Drava river from Lavamund to Dravograd. This is your westernmost plausible route to cycle across the border in cold weather. Trouble is you'll have to carry on going east along the river to Maribor to avoid climbing up into the hills. Getting from the interior of Slovenia down to the coast you have the coastal hills to pass, though not as high as the Austria-Slovenia pass. So I should imagine you can put up with a few cold days and get yourself to the coast.
Top

i've read a few reports of the road along the Croatian coast being heavy with traffic, narrow, hilly and generally a bit hairy

We did the coast road south from Rijeka a couple of years ago. It was, as you say, heavy with traffic, but it was June and a lot of it was holiday makers. Also the Croatians don't appear to be very cyclist friendly. People do island hop down the coast - we did Krk (bad) and Cres (good) but didn't go any further south.
http://www.farewellburt.wordpress.com - Europe on a Tandem....
http://www.thespokeandwords.wordpress.com - West Africa on a Tandem....
Top

I'm planning a similar ride starting in mid,late May. Warmer and though France ,Italy, Greece and across northern Greece to Turkey[ by which time it'll be getting seriously hot down there. ] Coast road in Croatia is indeed VERY hilly but of course stunning. Are you going via Iran, Pakistan, India or over the top through 'Stans' and China? I'm still of 2 minds and politics of Iran/Pakistan sound a tad unpredictable. Good luck.
Nick B
Top

Thanks for the info guys, we will be going through Central Asia and up up up the Pamir Highway and into western China before getting a train to Beijing for the ferry and a trip round Japan. From there we are a bit clueless but time will tell.
I guess what im after is wheteher to continue going along the danube or down the croatian coast into montenegro, albania etc, i know it boils down to personal preference in the end but would be interested to know if anyone has ridden both and can offer a comparitive view.
Danube appeals for sense of ease of navigation, and well ease in general i suppose but there is a certain something in me that just loves the sea and is also intrigued by countries such as Montenegro and Albania.
Great dilemma to be in eh?! its a hard life...
Top

I passed that way last summer, down the Croatian coast to Dubrovnik, then ferried it to Bari-Patras and then on to Athens.

Quite a climb out of Trieste and then dow to the coast at Rijeka. The only hassle was just a bit the monotony of it. Joining the coast road at Rijeka you know you will be on that same road for the best part of a week, chipping away at it 50 miles a day.

The traffic was OK, the road was well surfaced so you can keep yourself in a straight line, no need for pothole swerving. No issues with traffic the whole way even into Split, no problems. There are a few campsites along there and a developed tourist industry so no trouble keeping yourself fed and watered.

Split was a lovely stop, and so was Dubrovnik. But my overriding impression was that it was hard work and of being on the same road for a week ! 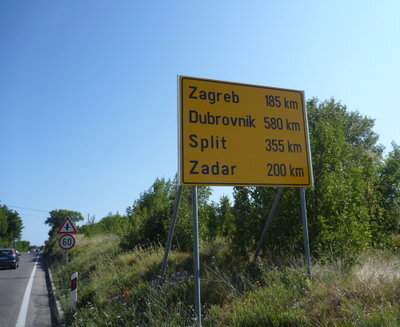 thanks Mattie, what time of year was that? we will there early April probably and will be looking mainly to wild camp if possible, are the beaches reasonably accessible? i gather that the roads are busy in the summer but at that time of year should be relatively ok. Can you recommend any worthwhile stops and what maps did you use?
many thanks, Bob.
Top

unclebob wrote:thanks Mattie, what time of year was that? we will there early April probably and will be looking mainly to wild camp if possible, are the beaches reasonably accessible? i gather that the roads are busy in the summer but at that time of year should be relatively ok. Can you recommend any worthwhile stops and what maps did you use?
many thanks, Bob.

Hi Bob. I passed through there in the last week of August and first week of September 2011. Sunny and hot ! but this maybe past the peak tourist season as nothing was ever full and I just got the impression that the peak was over. Still plenty of traffic about but not like the south of France in August where everything is full !

Wild camping, there looked to be lots of opportunities, not so much on the beaches as they appeared mostly small rocky inlets, but rather on the other side of the road among the trees and rocks. If you have a freestanding tent then I am sure you could pitch it easily out of sight of the road, among the trees and big rocks. I never fancied it as I rather have a shower and a cold beer and a bit of civilisation at the end of the day, especially travelling alone. But it looked perfectly possible.

Maps; Western Balkans from Stamfords online store, £9.50 Also bought a larger scale Croatian map in Trieste I think it was, at a petrol station along the way anyway. Also had GPS with Garmin City Navigator 2011. I found the GPS quite useful for distances to, as there did not appear to be many kilometre signs, at least not of use to a cyclist, so the GPS worked well for that.

Areas worth a look: Around the river Neretva area was a welcome change from the hot and dry and up and down. I am sure it would be possible to explore some of this lovely area in a boat, organised trip or paid for somehow yourself. I would like to do that next time !

Spilt and Dubrovnik may not appear to be that special when siting in your home trying to decide which short hall trip, and comparing them to all of Europe, but when you have cycled down the coast from Rijeka you will probably see them in a different light ! They are still beautiful places in the warm summer evenings, and for me the highlights of cycling through Croatia.

I hope you keep a blog of your trip to OZ with some pics and details. Good luck. 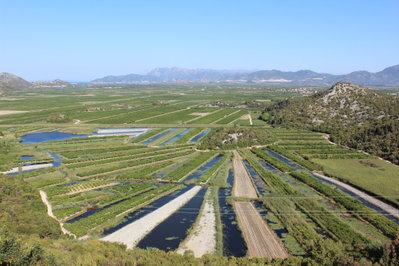 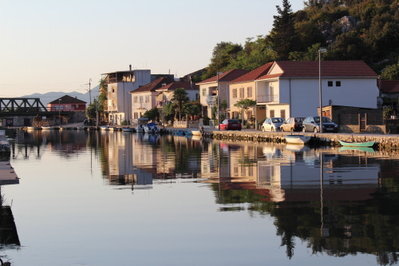 I cycled the Danube route to the Black Sea then went down the coast. Serbia was amazing, the gorge part there one of the best parts of my trip. After that though I wish I had gone a different direction. Romania was very flat and boring (apart from the friendly people) and the Black Sea coast is quite built up.

I've you're near Split, make sure you stop off in a small town just north of it, Trogir. When I did a sailing course we were based there, it's really nice along the pier. You'd probably prefer it to Split being a cyclist. Here's a birds eye pic:
http://www.travel-trogir.com/files/imag ... ogir_2.jpg

I think going along the Med is a much better idea. I felt the Black Sea was a bit commercial (sea tankers) and a bit of a poor mans Med.

Am in Oz now.
Top

Thanks guys, we are close to leaving, only 2 weeks to go! We have decided to get as far as Vienna and then decide from there whether to continue along the river or head to the Dalmatian coast based on how we are feeling and what the weather is doing etc. I am still leaning towards the coast but will see what materialises.
Thanks for the input...
Top

bealer wrote:Serbia was amazing, the gorge part there one of the best parts of my trip. After that though I wish I had gone a different direction. Romania was very flat and boring (apart from the friendly people)

For avoidance of any confusion by anyone reading this, these comments refer specifically to the Danube route in those countries. More widely, plenty of Serbia is flat and boring, and plenty of Romania is mountainous and interesting.
Top

bealer wrote:I cycled the Danube route to the Black Sea then went down the coast. Serbia was amazing, the gorge part there one of the best parts of my trip.

This part is known as the Iron Gates and features at least ten unlit tunnels up to 300m long; its terrific but lights are needed.

Its also possible to turn off the danube and head south across central Bulgaria. They don't get many tourists this way

It means crossing a range of hills. But check where the border crossings are as there aren't many of them. And don't forget about the Turkish entry visa fee.
Top

Yeah definitely have lights for the tunnels. From memory I think there are about 14 tunnels. As mentioned the longest is around 300m, although many are quite short (like 50m). The longer ones do get very dark (especially when your eyes have to first adjust). I didn't find them dangerous though, in fact they were quite exhilarating.
Top
Post Reply
13 posts • Page 1 of 1