I'm now thinking I really should have set up a blog on Crazy Guy or somesuch... but I've started so I'll finish!!

Day 2: Berneray to Drinishader (the Golden Road) 27 miles
Managed to drag myself away from Berneray on a dreich morning… but still had time before the ferry left to have brekka in The Lobster Pot

My medic friends were there too; they’d had been swimming that morning, urrghhh!!

The Leverburgh ferry times were skew-whiff due to low tides but I’d checked up on this when I was in Lochboisdale so I knew the first one was earlier than normal. I was impressed that the captain lowered the ramp again for a group of six cyclists who thought they were arriving in plenty of time. Mr Brompton wasn't so lucky and had to wait for the afternoon ferry since the midday one was dropped (and then got caught by torrential rain whilst I was languishing in my luxury hostel!). For the second time on this crossing I was entertained by jamming musicians, fabulous!

My muscles were fatigued from the day before so I dilly-dallied in Leverburgh for some time; the continuing dreich weather didn’t help but at least I was warm enough. Eventually headed for Rodel with the wind blowing briskly against me and a hill that seemed to go on for ever… I thought I’d never reach the top! Then I was on the Golden Road and I can tell you it’s the most fantastic roller-coaster ride!!! I loved it

The medics were there too (which surprised me because they should have been at least an hour ahead of me – maybe they went swimming again!) - I probably embarrassed them thoroughly but I was so exhilarated by the route that I forgot there were other people in the café and just blurted out how fab it all was! My photos don’t do it justice but here’s one; 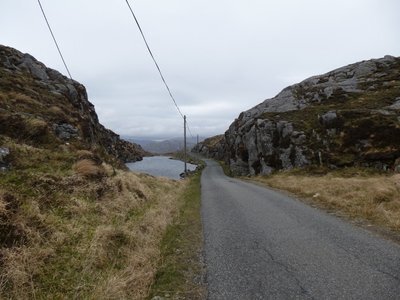 Drinishader hostel was a bit of a surprise since it’s the other end of the spectrum from Berneray – quality fittings and decidedly upmarket – but still only £20 for the night. No other cyclists there that night

but did have the company of a lovely lady from Glasgow (and her two reasonably well behaved kids).

Day 3: Drinishader to Kershader/ Ravenspoint 31 miles
I woke to find it a very fine morning indeed... 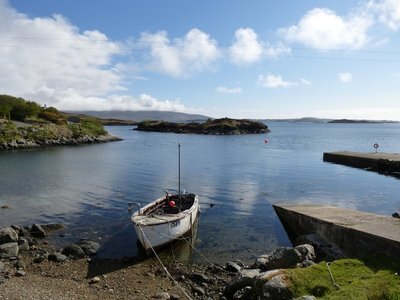 Approaching Tarbert I was overtaken by Mr Brompton and three friends who had joined him after I left Castlebay. So I gate-crashed their morning coffee session in the Tarbert Hotel to hear their tales. This included hearing about a very rough ferry crossing which was 1.5 hours late so I was delighted to have missed that!

My second attempt on ‘the big hill’ out of Tarbert failed miserably due to the wind funnelling against me through a cutting quite near the bottom! But after I’d pushed the bike up most of the hill (and noticed my Garmin doesn’t record below 2.5mph!) it was a most enjoyable ride up to Loch Erisort Inn. There I gate-crashed Mr Brompton’s table again – well, a girl can’t always wait to be invited! The wind had picked up somewhat after lunch and I was concerned I might end up cycling to Kershader and back to the Inn if there was no room (I hadn’t been able to get in touch with the Kershader Hostel’s warden) but the Inn waitress very kindly rang ahead for me and confirmed there were spaces.

Well, I have to say that Kershader is a bit of a dump BUT shortly after I arrived three lovely cyclists turned up (hooray!) and also three car-walkers. So I had a great evening flitting between them and playing games like Bananagram and Pass the Pigs

Day 4: Kershader to Cairisiader 38 miles
This route was going to go every-which-way other than East so I knew I’d be fighting the wind at some point! This turned out to be from Garynahine to Kinloch Roag – about 8 miles of pretty hard work but still loved the cycling, helped by it being a beautiful sunny day. In fact when I arrived at my B&B the first thing I said to my hostess was, “I’ve just had the most fantastic day”! And so I was just a few miles from Glen Valtos and my much anticipated trip down the West coast road, past Uig to Mealasta. How excited was I?!?! My hostess, Jessie (age 82) was a real darling and pampered me something rotten. She also let me stay an extra night so I was there three nights in all.

One of my favourite views on Lewis, heading West despite Claude facing East! 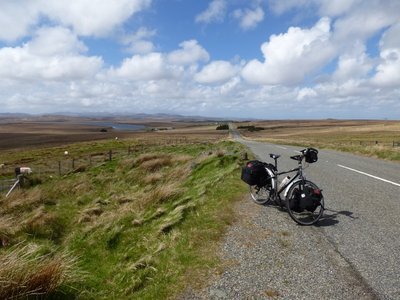 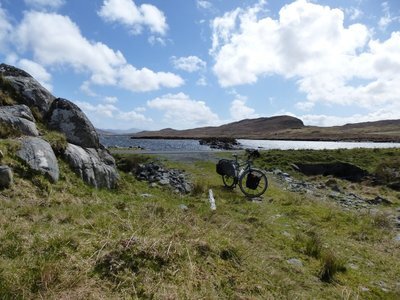 Came across one of Jessie's neighbours on an evening wander - she called him The Big Wheel which wasn't a compliment I don't think! 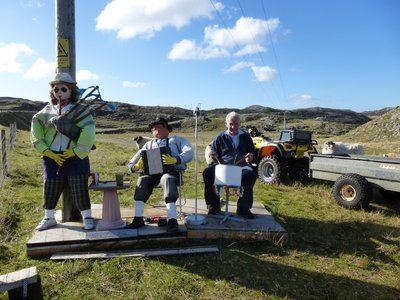 Hi Tigger,
really enjoying your write up! Sounds like you had a great time. The photo's are bringing back lots of happy memories! Actually I have several that are a pretty close match to yours (though without so much sun!). Looking forward to the next instalment...

123ttam wrote:Hi Tigger my wife and I have put a Crazy Guy on A Bike Trip report Here

Thanks for the link ttam, I enjoyed the read and your photos

But I was stunned by the number of cyclists at Oban, waiting for the Barra ferry - great pic! Think I was three weeks earlier than you and there were about 6 of us waiting! On my return ferry from Stornoway to Ullapool I was the only cyclist

Shame about the weather turning on you but at least you got some sunshine!
Top

gloomyandy wrote:Hi Tigger,
really enjoying your write up! Sounds like you had a great time. The photo's are bringing back lots of happy memories! Actually I have several that are a pretty close match to yours (though without so much sun!). Looking forward to the next instalment...

I guess it's no surprise though, to have similar photos. Even in the OH, where you could probably drive every single road in a couple of weeks, there's a distinct tourist trail! I noticed earlier when I couldn't escape Flickr's Lewis & Harris photos that some of the most beautiful ones are just off the beaten track - and usually taken by locals.
Top

Day 5: day trip from Cairisiader to Mealasta and back + Kneep/ Reef peninsula - 34 miles

I already adored my B&B hostess Jessie by this point but I have to say that my mattress was like a concrete block – I think sleeping on the floor would have been more comfortable! But I woke in good spirits due to the sun shining, with the wind forecast to be a moderate southerly (with me on the way back) and a much anticipated ride ahead of me.

Having gone through the usual “Battle of the Breakfast” (where ‘just a small helping of porridge please’ is taken as a challenge to force feed me three times more than I want!), I set off towards Glen Valtos checked only by Jessie reminding me to fill my water bottle! Oh, and with only a quarter of my usual luggage

After a couple of miles I reached the Glen, and although it was great riding through it, I have to admit that it didn’t have the wow factor I recall from driving through it 27 years earlier! It's blinking hard to get photos which capture the atmosphere of it. Some lovely tarmac though – something in short supply even in the Hebrides. (As an aside… back in 1986 my Mum & I noted lots of road upgrading schemes (making them 2 way) particularly near Uig and also between Tarbert and Stornoway; funded by the EC (or was it EEC?) as it was then. After that, I guess, as everywhere, the road got worn (by weathering rather than traffic) and surface dressing was the ‘solution’. I didn’t see many potholes up there but the surface was generally pretty rough. Enough for me and another cyclist to comment that between ‘the big hill’ and Lewis, the nicest bit of road was to the left of the white line – plenty wide enough to cycle on and decent tarmac!) After stopping at the Uig Community shop for some comestibles and postcards (and meeting a cyclist who seemed to have lost his brother for the second day in a row!) all I had to do was cycle to the end of the road

And there was norralot of traffic I can tell you! Hillier than I expected though – even travelling light I was finding the hills hard… I told Jessie this in the evening and she said, “Aye, there’s a few steep braes on that road’ 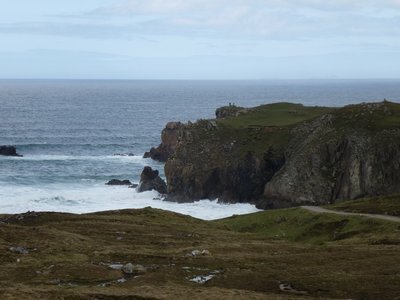 Uig coast (where it's not sandy beach!)

Between Breanish and Mealasta I just had to stop at the ‘information stones’ which I liked though a passing walker rubbished them! 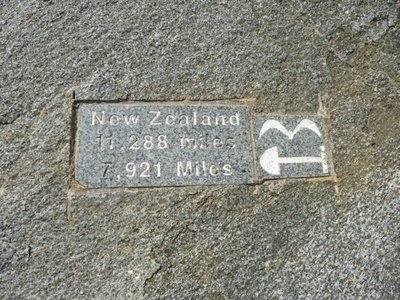 Andy – that view you couldn’t identify – it’s from Mealasta – the darker island on the right is Scarp (the island which was subject to the rocket post trial, from Hushinish, but is now uninhabited, AFAIK) and beyond you can just see the little hill at Hushinish. Here’s a similar view; 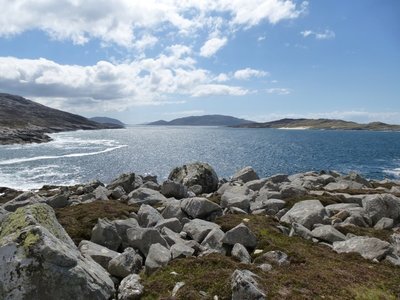 I was in a bit of a rush on the way back as the day seemed to have passed very quickly and I needed to have my main meal at the community café which shut at 4pm. But I was sad to miss out on Mangersta, and I didn’t go and sit on any sandy beaches either. After eating soup and cake (errmm, whaddya mean that’s not a main meal?!) I had plenty of time and tons of daylight left though energy levels were flagging, it being my fifth day in a row. However, my fellow forumites had encouraged me to cycle round the Valtos peninsula, and so it was done! And a very nice 6 mile loop it is too. I admired the new (and surprisingly complex) Reef Raiders memorial but was annoyed to hear from Jessie that a week earlier and I could have gone to the opening ceremony with the Vatersay Boys! 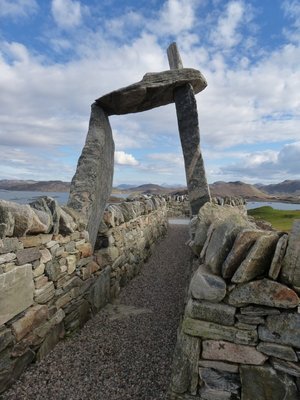 part of the Reef Raiders memorial

However, the only time that I have been to Barra was mid August and a steady breeze blew all week apart from the night I camped and had to wear the midge net.

What would people recommend?
Top

When is Easter next year? That could have a bearing on advice given. I've only been in May or September - to avoid the midges - so I guess I'd opt for Easter rather than July.

Glad to hear you are planning to visit the OH