Beekeeper - a friend of mine flew Vietnam Airlines from Nha Trang to Saigon and was charged $25 for his bike, then flew on to Bangkok and they charged another $100 for that leg.

It seems that V. Air have nothing on their website about bikes and so this leaves them 'free' to charge anything.

Who do you mean by 'Consumer Affairs' - Aussie organisation or V. Air's customer care dept? Also, out of interest what was the value of your bike - presumably more than $150.

I would suggest that cyclists only fly with airlines that have a clear bike policiy. People knock budget carriers like Ryanair, but you know what to do re packing and what to pay.
Top

Just to add another positive recent experience of flying with bike and gear to USA from UK with British Airways.

I flew out to Washington DC on 27th May 2013 and then back from L.A. (after doing Trans AM) with British Airways. Totally easy and smooth process.

I packed my bike, tent, two front panniers, sleeping bag, mattress and other assorted bits of equipment in the box with the bike. The total weight of packed box was 31kg, the max weight that British Airways will allow for any "oversize" sporting equipment is 32 KG so pretty close to this. Staff at check in were not phased at all by bike in box. I chose to go with box method after debating poly bag simply as it enabled me to carry so much more and it also enabled me to pad out the box to some extent with softer items like tent, sleeping bag and some clothing to cushion the bike in the box.

I checked the bike/equipment box in as my 1 (oversize) checked "bag" and used on of my rear Ortlieb classic roller panniers, stuffed to the gunnels, with the other flattended classic ortlieb pannier taped to the back of the full one. Even when packed to the absoblute maximum with mainly clothing but also my heavy brooks saddle, it was still well within the measurements allowed to be taken on the plane as "hand luggage".

There appears to be no weight restriction for hand luggage just as long as the hand luggage is within the stated dimensions and as long as you can lift it into the overhead lockers. Next time I may pack more clothing in bike box and bring heavier items like pedals, lock, saddle in hand luggage as not sure completely of the accuracy of my home bathroom scales (turned out to be very accurate) but be good probably to aim for around 30kg packed weight. I was surprised that by using virtually a whole roll of Duct tape to secure the box, the weight of the tape added nearly half a kilo so allow for this.

British airways also allow a lap top bag in addition to main piece of hand luggage so I used my Ortlieb bar bag with it's strap to carry all my paperwork, wallet, chargers, phones etc on the plane. I wore my helmet to get on the plane and travelled in my cycling shoes. I purchased a cheap par of lightweight shoes at a Wal Mart after arriving to use as an off the bike/second pair.

British Airways did charge me an overweight baggage charge for each way at check it, it was £40.00 on way out and $60.00 on way back which I felt was very reasonable and affordable considering the size/weight of the box. I met several americans on my tour who had had to pay around $600.00 or more to have a US domestic airline take their box/bagged bikes from East to West Coast so felt B.A. service was excellent, long may it continue. The bike and box were in perfect condition at the end of both journeys, I had spent some time with a black marker pen writing "Bicycle" in bold lettering, fragile, this way up etc on box which perhaps may have helped. I would not hesitate to do this again if I get the chance for another long tour. Some pics of bike ready for packing and boxed just for reference. 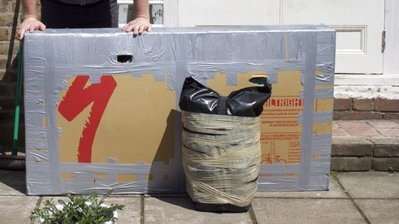 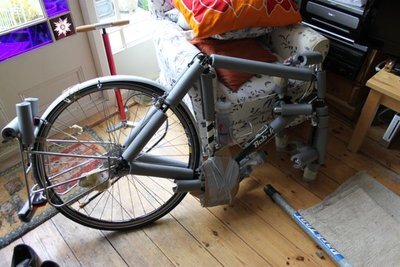 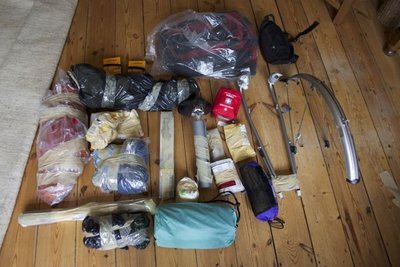 Have u written / posted a blog about the trip.

accounts of others flying with bikes. loads do it several times a year.
Top

Just want to say I've taken bikes (3 bikes in fact) twice with Norwegian air and they have been really helpful and accommodating. They didn't require anything special to be done and it cost around 40 euro - fairly standard price. They were also really good about accepting our dozen small bags i.e. all the panniers etc, in lieu of one large suitcase. If only all airlines could be so accommodating. Packing everything in a box/large bag is fine if you are leaving from home, but how are you supposed to do it when you have to cycle to the airport from your last camping spot to get the plane home..? So thank you Norwegian
Top

Not wishing to detract from your praise for Norwegian, but you asked about multiple bags.

I use large polythene bags, often available free from bed shop, otherwise from new rubble sack or sheeting from hardware store. Easily carried on a bike for final leg to airport. Just put all bags inside as seal with parcel tape.
Top
Post Reply
36 posts