by jamesgilbert
Just planning next year's trip... I'm thinking about Paris to Amsterdam - has anyone heard of the Van Gogh route that goes via Brussels, Antwerp and the Hague?

Any other suggestions welcome - heading further east through Maastricht and Eindhoven might be nice as well.

by Mattie
I did St Malo - Paris - Amsterdam about 3 years ago.

From Paris headed east to Chalons en Champagne - Charleville-Mezieres - the Ardennes - then followed the river Meuse round to Liege. Then on to Maastricht - Breda - Amsterdam - flight home.

The land across Champagne was rolling open land that could be a struggle if the wind was against you on the long open roads. The Ardennes was very hilly until I got to the river Meuse and a great trip following the river. It got a bit busy and not so pleasant near Liege. Maastrict was lovely in the sunshine, with everyone out and about, but the road from Liege to there was a bit of a bottleneck, and I was never sure what country I was in as the cars parked in driveways often had both Dutch or Belge registration numbers in the same street. Holland is lovely but small, with very friendly people. I have a Dutch bike and always the Dutch speak to me on campsites.

I took two weeks off work and included a few days sightseeing in Amsterdam staying at the Campsite. Lovely trip. Good luck.

by jamesgilbert
Thanks for this; I did Paris to Chalons in 2013, on my way to Budapest, so would probably head a bit further west to avoid redoing the same route. The Meuse does look good, thanks for the other tips.

Unfortunately I have now realised that the Thalys doesn't accept bikes unless they are dismantled in a bike bag, so I might go somewhere else entirely - I don't want to fly back.

by chocjohn9
Sounds great. You don't have to use a Thalys train. There are "normal" ones, slower of course, that go back to either Brussels or Paris.

by Mattie
How about a trip through France ? if you can manage a trip to Budapest you could choose anything in France.

I have found cycle touring in France to be almost perfect. The country is not too small, and the distances between towns is also about right. Lots of campsites, mostly good roads. The only downside is that some of France's agricultural land can be a bit boring, but it will not last more than a couple of days before something of interest comes along.

by jamesgilbert
@chocjohn I wasn't able to find any slower trains that would get me back to Paris from Amsterdam. Using the bike option on www.bahn.de, I got a minimum journey time of 15 hours with between 6 and 10 changes! If you have any info I'd be very interested.

jamesgilbert wrote:I got a minimum journey time of 15 hours with between 6 and 10 changes!

For a timetable see here somewhere in the middle of the page:

by jamesgilbert
Very useful, thanks! I had no idea that it was possible to get a 'normal' train from Antwerp to Lille. The SNCF website only proposes Thalys trains, perhaps unsurprisingly

by chocjohn9
As requested, check this out -

Check Euro and IC "intercity" trains. As I say, slower, but direct, via Bruxelles.
Just make sure they carry bikes, but here, bikes are everywhere and expected on trains. (At peak times, "normal" (not fold bikes) are allowed on all trians!!)

Hope this makes you reconsider and do the trip. It does look like a good one. May be I will do part of it (I live in Bruxelles)

by jamesgilbert
Yes, it looks like it's going to be possible, thanks to the Belgian trains! By a strange coincidence, I currently have a Dutch WarmShowers guest who has followed the Van Gogh route from Breda to Paris, so I will be studying his guidebook this evening.

by chocjohn9
Oh, I am pleased that it is possible....now you just need to know if you WANT to do it!
BTW, whilst I know that Belgium has a reputation for being flat, I will let you in to a secret...it isn't true. Well, the west (Flemish) bit is, OK, but the section you will pass through, has gently rolling hills. Quite like loads of places in the UK....I mention this now, so you will not be surprised

If you need help with the train bookings or whether they will carry your bike, for sure, do let me know. I'll need dates and rough times, obviously. (Don't know how good your French is and I would want you to have two shocks whilst over here)

Is there an official route? The map on the link isn't great...

chocjohn9 wrote:Is there an official route? The map on the link isn't great...

Yes.
Buy the guidebook here. (Sorry, only in Dutch. Site and guide.

I think it's the yellow n°7 route on the attached map, although it actually goes as far as Eindhoven. 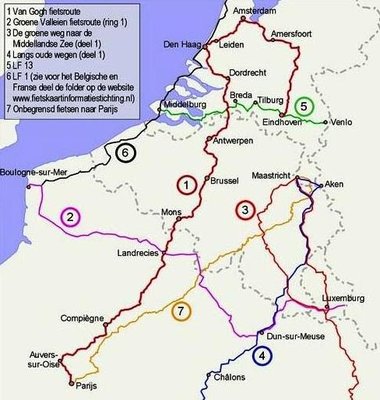 Thanks for the offer for help with train tickets chocjohn9, but my French should be up to the job!

jamesgilbert wrote:Unfortunately I have now realised that the Thalys doesn't accept bikes unless they are dismantled in a bike bag, so I might go somewhere else entirely - I don't want to fly back.

Just some other ideas should you still want to finish in Amsterdam. Not sure where home is but you could consider getting the ferry back to the UK then either cycle/train home.