My son and I will be riding the Tour de Manche from St Malo to Roscoff in a few weeks time, using all the off-road and quiet-lane sections of the route. I don't have a GPS device and prefer paper mapping anyway. I do have the Michelin 1:150,000 maps, but these are too large scale to show all the small roads and junctions. After doing some research this afternoon, looks like I might end up going down to Plan D of my preferences

Plan A: Paper map(s) marking the route would best, but another CTC Forum thread suggests there's no such thing?

Plan B: Guide book of route, including mapping. Not found anything yet - does this exist?

Plan C: Decent scale standard maps (aka OS 1:50,000) onto which I can hand trace the route from the website. Again not found anything yet - surely these exist? But where?

Plan D: Pick up leaflets from tourist offices. This is suggested as the best option on same CTC thread. Are these always available, and are they a reliable way of getting back on track when we miss a sign or the sign is missing?

Advice on any/all of these much appreciated.

We are going the other way, St Malo to Caen. The Michelin 1:150000 we purchased has bicycle routes marked on it that appear to match up with the http://en.tourdemanche.com/ website.

Cor, that looks like fun!!
(I'll be able to try out my GPS with newly aquired maps-of-Brittany & Normandy

)
Claud, you could use one of the on-line route planners to plan the route - Open Cycle Maps has probably got the TdM marked on it, or at least its consituent parts... then print out map sections.
In the past, I've used Geoportail to map French trips - especially for navigating through towns - and printed screenshots - I think they have recently added a print feature anyway. http://www.geoportail.gouv.fr/accueil
The paper stock I've used with both my own inkjet and the work colour printer (

) is pretty flimsy and won't stand up to wind or rain, of course, but you could either go to the trouble of laminating them, depending on how many you need to cover the trip, or else put them all into one of the very effective waterproof pouches you can get on ebay these days for about £3.
Stop Press: It is marked on OCM, just not very explicitly! 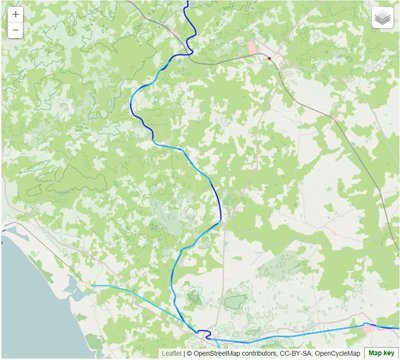 I'm doing Cherbourg to Roscoff using that route in a couple of weeks time. I've downloaded the gpx files onto my phone and Garmin thingy. I also bought the memory maps for france at 1:100,000. These are on the phone and I've printed them with the route marked on it. If you pm me I might be able to help....
Top

I'm delighted you have introduced me to this lovely looking route - Thanks!
As I implied earlier I'm in the lucky postion of owning a GPS device and have just downloaded the entire route to use on it

however, I like paper maps too and am sympathetic to your original question, so here's my tuppence-worth.
The french Michelin 1:150,000 do have some cycle routes on 'em and you'd need only 2 (303 & 309) - they're a good price at Stanford's (buy 1, get the other half price!). All you need to do is check whether they've got the TdM on 'em - and even if they haven't, I'd buy 'em and spend an evening in front of the computer with a yellow highlighter.
My ony concern is that I'd worry that they don't have enought detail on - some of the minor roads in Normandy and Brittany are very minor and almost certainly won't be marked on these maps. This has caught me out in the past, and I've tended to take maps with larger scales, IGN Top 100 is my fave) but I'm sure that all but the tiddleyest roads will be on the Michelins - you get used to spotting the ones that don't show on maps. Plus if you going to mark the maps up in the comfort of your own home you may well have the opportunity to spot any omissions...
(rides: Brompton nano & ever-changing Moultons)
Top

Without wishing to get too nerdy about maps & scales... here's 2 small samples of a road I know well in Brittany. Note that several minor lanes clearly visible on the IGN sample are missing from the Michelin. However as I say a bit of common sense works wonders - the missing minor roads are fairly self-evident when you came across them. Fairly, but not always

I would be happy to take the Michelins, though, in spite of my reservations - it's largely a question of awareness - so long as you know that the dustiest small lanes may not be marked, you can make a judgement, 'specially if you've got a compass with you, to double-check the direction of your intended travel. Have Fun!!
(rides: Brompton nano & ever-changing Moultons)
Top

...and now I'm thinking, "What if the TdM goes down one of them missing lanes!?"

Many thanks for all the replies - looks I'm on something close to Plan C - have bought IGN Top 100 maps, and will trace the TdM on if it's not marked. Two of these covers the whole of the St Malo - Roscoff section. Interesting that Michelin are now marking it on their 1:150000s, though I agree with the concern that they're not detailed enough when we miss a sign. And we will miss some signs in 200m of riding

. I just had a closer look SW of St Malo - the route uses lanes not marked on the 150,000, and also a long stretch of old railway line (hopefully there'll be plenty of those) that only appears on geportail at very high resolution.

Anyway, I'll also check the Tourist Offices for TdM leaflets, and feed back how that goes.

Good Choice ! That's what I'd take.
Have Great Time and we look forward to hearing all about it when you return. BTW another poster had a thread going a few weeks ago on the subject of where to go between Roscoff and St Malo and there were a few helpful additions to that, including one from me...

viewtopic.php?f=16&t=85188
In fact given that the area you're heading off to is a favourite destination for a lot of the folk on this forum, you may well be able to pick up a few top-tips by spending a couple of hours wielding the Search tool - something you may well already have done!
(rides: Brompton nano & ever-changing Moultons)
Top

The marked up Top 100s worked v well as backup and for relocating the route after overnight detours. The signage got off to a non-existent start from Dinard for several miles south - at one point with cyclists each relying on others coming the oother way to relocate the route the other side of major road junction crossing

. But after that it was great - just the occasional sign missing / hidden by a bush / missed by us. I can't comment on the availability of TdM leaftlets in Tourist Offices - in the end there was no time to check those out.

Re. the route itself, it's been planned out really well - all on v quiet lanes with bits of fine gravel track connecting them occasionally, and a handful of longer stretches of fine gravel. Bril for those wanting a relaxed potter, and would be ideal for inexperienced cyclists. But that did mean it was much slower riding than I'd expected. So with that and the hills - they're short, but lots of them, and with a young teenager stoker more out for the fun than for a workout

- we ended up with long days in the saddle, and still occasional short cuts on more direct roads. But still had an absolutely fantastic time. Both came home full of the joys of summer.

The other thing to note is that the coast is only in view maybe 30% of the time. I guess that comes with the planners' compromise of finding back roads. But that 30% is stunning. Have already suggested to Mrs C that we return to Brittany for a family hol

Oh, and the St Malo - Dinard ferry was great. Runs every 20mins, and a simple roll-on roll-off even for a heavily laden tandem.
Top

Thanks for the feedback

Interesting - might be tempted myself as going Portsmouth/Caen next month...
The folk that posted about the St Malo / Dinard ferry will be heartened by the news that there's no steps, too!
(rides: Brompton nano & ever-changing Moultons)
Top

simonineaston wrote:Without wishing to get too nerdy about maps & scales... here's 2 small samples of a road I know well in Brittany. Note that several minor lanes clearly visible on the IGN sample are missing from the Michelin. However as I say a bit of common sense works wonders - the missing minor roads are fairly self-evident when you came across them. Fairly, but not always

M.JPG
IGN.JPG
I would be happy to take the Michelins, though, in spite of my reservations - it's largely a question of awareness - so long as you know that the dustiest small lanes may not be marked, you can make a judgement, 'specially if you've got a compass with you, to double-check the direction of your intended travel. Have Fun!!

Great example, but there's a couple of things that complicate matters;-) The IGN will show all those little white roads as exactly the same size so actually following one is very difficult because when you get to a junction it's not obvious which road is the 'through' road. You end up with a maze of roads all the same size and personally I find it almost impossible to follow. The 'missing' roads on the Michelin tend to be those not taking you anywhere and those marked will be the obvious 'main' road at junctions with roads that are unmarked (normally;-) Also Michelin is much better at showing the same small villages which are signposted at road level - often the IGN will show a village that's not signposted but miss a village that is (and some villages aren't in the correct place!). Once you get a feel for how Michelin work you'll find them much easier to follow and more accurate overall.

Lastly the 1:200,000 Michelin are waterproof and indestructible;-)

And that's why we supply Michelin - not IGN to our customers and use them exclusively on our own tours;-)
35 years of cycletouring, 30 years of running cycling holidays, 5 years of running a campsite for cyclists - there's a pattern here...
Top
Post Reply
12 posts • Page 1 of 1