Ive done the Tarka trail on 25mm and 28mm tyres. Its bumpy but do-able, you just need to be alert and steer around the largest rocks/holes.
http://www.onesti.co.uk
Top

honesty wrote:Ive done the Tarka trail on 25mm and 28mm tyres. Its bumpy but do-able, you just need to be alert and steer around the largest rocks/holes.

Yes do-able I was just suggesting what the run of the mill cyclist would expect.
On the tarka at the barstaple end where its very busy all maner of bikes you will see but on the dark damp rocky parts very few cyclist as its too far from civilisation so to speak, also with narrower tyres your speed would also be hampered

I use my tourer for every terrain but the tyres do suffer many nicks from the flints.
A seasoned rider would fair OK and also younger would not be phased by a odd bump or two, the OP should not be put off if they have 28's but 25's...............maybe a good tread and puncture protection would be ok but I would say be prepared for mishaps.
Mick F's already sampled these so called cycle paths on his 23's and he's not liking them.............
Me I will do anything, I find the off tarmac stuff interesting.
NA Thinks Just End 2 End Return + Bivvy
You'll Still Find Me At The Top Of A Hill
Please forgive the poor Grammar I blame it on my mobile and phat thinkers.
Top

NATURAL ANKLING wrote:Mick F would probably be ejected out of his brooks If he did the Tarka or even Clearbrook part of Drakes trail

I did the trail all the way from Liara Bridge to Clearbrook via Saltram and Marshmills. I gave up at Clearbrook and did the last of the ride to Yelverton on the main A386, as it's so much easier and quicker on the roads!

It was interesting and a novelty, same as Gem Bridge and the trail through Grenofen Tunnel, but TBH it is all a waste of time and money as far as I'm concerned.

Hi,
Old news but another waste of money 1.6 Mil

Another bridge I pass over several times a week but after a blaze of local big wigs glory it grows cobwebs, I would have been happy with a wooden bridge.
http://www.sustrans.org.uk/policy-evide ... alking-and

Wow, never anticipated quite such a full and detailed response - thank you all. For info, we're heading by train from Newton Abbot to Barnstaple on Sunday morning (first train from St. Davids, hoping and praying the 6 minutes connection time will be sufficient...), leaving Barnstaple about 11:00 or so. My bike's a steel tourer with 700x32 and my son's is a hybrid with fairly chunky 26x1 and a big bit, or 2 and a small bit, I think, so don't have any worries about the surfaces/terrain. Couple of panniers on the rear of each. 40 miles or so on Sunday afternoon along the Tarka Trail to Meeth then the main road to Hatherleigh and lanes to Okehampton, followed by Granite Way to Sourton Down to camp for the night. Down to Plymouth during Monday, assuming we can successfully negotiate Tavistock! Gonna be fun, although my son has just done a week at scout camp, so he could be utterly useless...
Thanks again.
I have an opinion. It might not always be thoroughly thought through, but it's there.
Top

The national trust gorge at Lydford is nice if you got an hour or so to walk around it.
http://www.onesti.co.uk
Top

We had a great couple of days. In summary - amazing wildlife (a buzzard at very close quarters and a pair of deer), the lanes are more interesting than the rail trails (unsurprisingly, I guess), bikes on trains no problem, well signposted on the whole, met some friendly people (a pair doing pretty much the same as us, a chap doing the whole thing in one day training for London to Paris and a family who did it over five days), a mix of surfaces on the trails, not the prettiest entry into Plymouth...
Here are a couple of links to the route we took (including a diversion for maintenance works at Grenofen) for anyone that's interested.
Day one, Barnstaple station to Sourton Down: http://www.brytonsport.com/mapTrackView/2?id=6148064
Day two, Sourton Down to Plymouth Hoe: [/url]http://www.brytonsport.com/mapTrackView/2?id=6148066[/url]
Thanks again for your comments and suggestions.
Sean.
I have an opinion. It might not always be thoroughly thought through, but it's there.
Top

Hi all, I have recently joined and am interested in completing the Devon C2C
Was wondering how other people have completed the logistics of getting people and bikes back to the start point.
Is there a train that goes between the start and finish ?
Any advice / experience gratefully received

Welcome to the forum.

You can get by train to Barnstable and/or Plymouth.
Not sure where the recognised C2C route is. Maybe it's something to do via Cycle Routes?

If it were me, I'd start at the northernmost point of Devon is and finish at the southernmost, but I'm an independent sort of guy and I'd do it in a day or two on normal roads.

Northern of Devon is north of Countisbury at Foreland Point, and southern is south of East Prawle at Prawle Point.
Mick F. Cornwall
Top

Many different routes possible.
I am 6 miles off route. 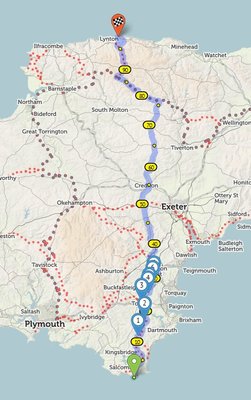 I've ridden (most of ) this couple of times.
I've previously ridden the Ilfracombe to Barnstaple section when camping at Morte Point so therefore wasn't concerned about missing this section and started both times at Barnstaple.
First time we got the train on a Friday evening. Bristol to Exeter (booked bikes) then Exeter to Barnstaple (can't book but it wasn't at all busy).
We stayed at the Royal and Fortescue Hotel, which is a couple of hundred metres from the station, they were very helpful finding a space for our bikes in their garage. We then rode to Okehampton where we stayed at the YHA. Next day rode to Plymouth and got the train back that afternoon to Bristol.

Next time I got an early morning (~ 6.00 am) train from Bristol arriving in Barnstaple at about 9.00 am and rode to Okehampton and then up (and it is up) to Belstone and wild camped by the river Taw. Next day rode to Plymouth and got the ferry over to Cawsands, as I was on my way to West Cornwall, where again I wild camped.

It's a lovely ride suitable for all abilities. When coming into Plymouth make sure you take the NCN Sustrans path no 2/27 to the East of the river Plym. The 'bike path' on the West side is basically a pavement next to the A374 and is uninspiring at best.
Top

Hi,
Navigating the A38 underpass is a right P.I.T.A.

so many city route signs to foil you. 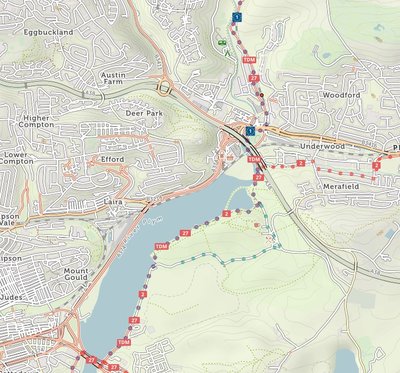 After that the rest is easy and pleasant.
Today I am not sure about Meeth..........ah I see that you don't have to use that spur, but Pedrockstowe to little Torrington still shows as single path not track?
Anyone done this recently? 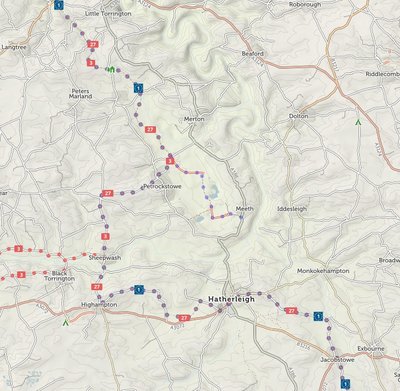 Barnstaple to ilfracombe is pleasant and laid back, any one done Putsborough to Wollacoombe (278)?
That's not easy, the single path is a muddy bridlepath and the track is the potholed car park, glad to get off that! Though I was on 23's with luggage 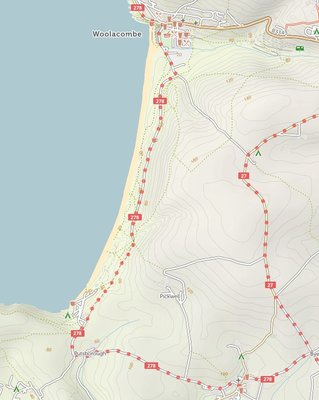 Train goes to Plymouth and Barnstaple, unfortunately you need to go through Exeter so it’s not the fastest.
http://www.onesti.co.uk
Top

I left the car on Exeter, train to Barnstaple, ride to Plymouth, then train to Exeter. A long weekend for me. Very enjoyable.
Top

As others have said, the return train journey from Barnstaple to Plymouth goes via Exeter. An alternative is to cycle part of the way. We got off the train at Yeoford and cycled back to Plymouth via Okehampton.
Top
Post Reply
32 posts