Please be fair and thoughtful in your opinions. No rants please.
Post Reply
2 posts • Page 1 of 1

I purchased this from 'Amazon Warehouse' for £18. A customer return or something like that.

It is a bluetooth device that uses your phone for GPS (over bluetooth). It can also pair to a bluetooth HRM, cadence sensor and speed sensor.

Starting it up is not too difficult - it's easiest if you leave Bluetooth active on your phone, and then load the 'Cycling' app which can be installed via the Google Play Store and I'm sure also Apple's version. (At the end of the ride it will automatically upload to Strava, if you want, which is a very easy process.)

'Clicking' the computer using the classic Cateye push (there is a button behind the computer, which pushes against the mount), starts it looking for something to pair to. It generally pairs quite happily to the phone. Sometimes the 'connect' toggle in the app is turned off, or you have to go to 'pairing' in the app to try and get the things to mate. This doesn't take too long. However it might not be suitable for the most technologically challenged among us?

The GPS, speed etc. is generally as good as your phone. So it might be as well to test the GPS on your phone first, e.g., using Strava to record. If it's in your pocket you probably won't notice anomalies. However I find that I get anomalous results in 'canyon' type lanes, where it's enclosed by trees, so you could drill down a bit to check on those segments to check that.

Here's a screenshot showing the GPS drift - see the line on the map, which is zig-zagging, and also the anomalous speed results. 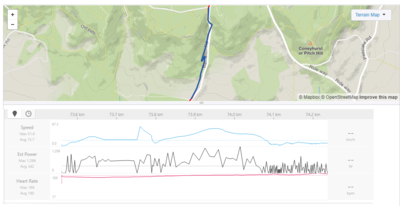 On a more open road, the speed readings are accurate 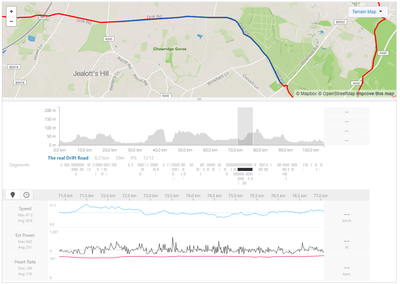 It may be that a dedicated GPS device will give better results, however not necessarily. My phone is generally in my jacket or shorts pocket and possibly this affects GPS reception to a degree.

In any case if you want to have accurate speeds even in enclosed roads, you will need a Bluetooth speed sensor.

You may also wish for a cadence sensor.

There are several types:

These simultaneously track the rotation of the crank & the wheel, using magnets 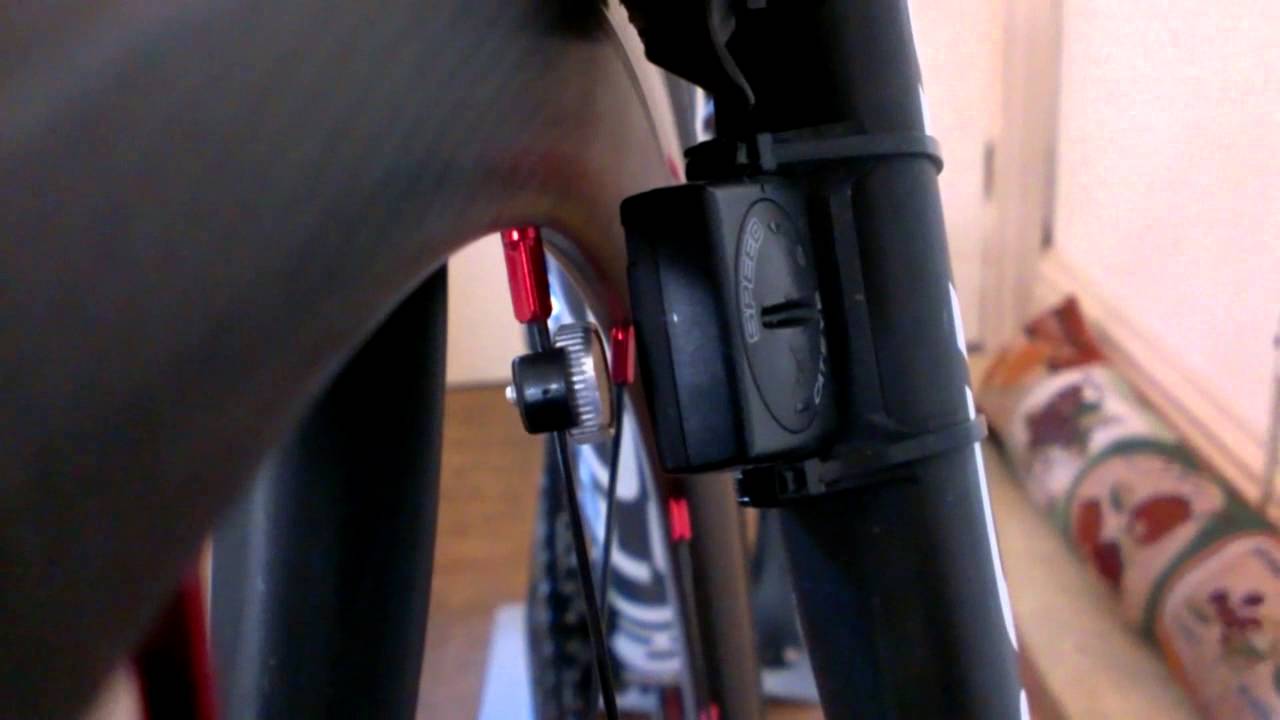 These strap to the hub (speed) or inside of the crank (cadence) and use accelerometers to measure rotation. The speed and cadence sensor are often identical electronically and some versions can be switched to serve as either role, though not obviously at the same time. Cadence sensors can also be attached to shoes, rather than to cranks, for use on multiple bikes.

Both types of sensor are available in Bluetooth or ANT+ versions or some support both. Cateye only supports Bluetooth, so you will need a Bluetooth-capable sensor if you want to use one.

which worked fine though it fell off - suggest using strong sticky pads to secure.

Branded Wahoo ones are probably the best - just under £30 each https://www.wiggle.co.uk/wahoo-rpm-spee ... 0-and-ant/

And there are some on Ebay for as little as about £9. (Accelerometer-based - I wouldn't consider a magnet one at this point, as the magnets move about in annoying fashion.)

As regards the computer itself, there's not a lot to say.

You can use it without a phone if you have a Bluetooth speed sensor fitted. But you probably wouldn't want to?

You hold it down to pause, which is easy enough.

The display is not particularly customisable - essentially you have a customisable top field, probably speed, though you can choose cadence or heart rate, and then data at the bottom. The bottom data fields by page are: max speed/heart/cadence, trip distance, total distance, time of day, trip time, altitude, average speed/heart/cadence. For the average and max pages, the top field is average/max, otherwise it's instantaneous. Some of these pages can be disabled from the app, e.g., total distance is probably useless given that you don't need this constantly available.

You do get a little arrow showing if you are going faster or slower than your trip average next to your current speed.

You also get a little notification icon which can check for email, phone, and SMS (and I think Whatsapp?). This seems to work fine, so you do get told if you have received a phone call.

The Padrone Smart has a large display considering how few fields are on it. The Strada Smart appears to be identical, but probably discontinued, just with a smaller screen.

The Padrone Smart+ is the same concept but supports power meters and has a backlight. It also shows your phone's remaining battery level. You can also display more fields on the screen at the same time. In addition, it has two buttons on the front of the device, rather than the Smart's slightly easier single 'clicktec' system.

At normal retail (£47 for the Smart, £58 for the Smart+), I'd likely opt for the Smart+ over the Smart. There is also the Padrone Digital, which lacks the smartphone & hence GPS. It seems a bit redundant?

Note that the Wahoo Elemnt Mini is £80, but comes with a ~£30 Wahoo speed sensor. It has a similar screen size.

There is apparently a slight niggle with that device in that it supposedly works only with their own branded sensors (or at least those capable of Ant+ and Bluetooth at the same time, since it uses one channel to the phone and one to the computer). The Elemnt Mini does not have a backlight.

* very long battery life and relatively low cost (£18 in my case)
* easy upload of data to Strava, since the data is being recorded by the phone
* some useful information, e.g. distance travelled, time elapsed, speed, time of day, heart rate, etc., but
* no routing. I use my phone in my pocket and rely on voice but this is not ideal if you don't know where you are going. A phone mount for the bike could be a good idea
* essentially quite dumb - if you want something that has apps to tell you to do 1 minute at 100% heart rate and then 1 minute at 60% or whatever, you'll need to use your phone directly, or a Garmin
* at full price it's closer to the price of a dedicated GPS device, however you might still prefer it for reason of the battery life.
Top

photos loaded now,doh what actual computer model is it for? Ill take a look but if its the same as the Cateye Cordless 2 I dont think I have any going spare.
https://www.nacdd1305.org/
Top
Post Reply
2 posts • Page 1 of 1