Specific board for this popular undertaking.
Post Reply
2052 posts

I think you’ll find riding it over 2 days would be much nicer.....

softlips wrote:I’m doing the Seascale to Whitby coast to coast in one day at the end of the month. Think it’s around 155 miles (and has an incline or two).

That sounds like fun ...... not ......
"There will come a day, when all the lies will collapse under their own weight, and truth will again triumph." Guess Who ...
The Road Goes On Forever
Top

Via penrith Alston consett Newcastle.
I have the sustrans map somewhere I did it maybe 4 years ago
I'm not getting older,just gaining more experience
Top

I'm happy to map the route if my co conspirator will repeat the excellent logistics he did on Lejog
Depending on when it will be I will either ride if I'm fit enough or accompany the backup driver if that's acceptable
I'm not getting older,just gaining more experience
Top

I can't believe that this thread is just about to pass 2000 posts- when I started it, I really did think I was on my own!

I'm sorry that I have never had the opportunity to join in with the other Wimps. It's been due to a tragedy of unbearable proportions
in my family (as well as me being even more wimpy than the wimps!). But I have been able to do some of the LeJog I always wanted to do
in sections- LE to Gloucester, Gloucester to Birmingham, and Birmingham to South Queensferry this year. I've prided myself on finding
the fewest contours (except on the lunatic NCR south of Kendal!) and most of it has been done solo and unsupported.

At the end of August I'm going to do the last stretch up to JoG, this time supported and with my sons and friends riding along
in memory of my Grandson Ben who succumbed to brain cancer aged 6 in May. It'll be sad, but we'll laugh as well because had Ben
been with us (he was an avid cyclist) he would have laughed most of the journey.

I've enjoyed reading about the Wimps and your exploits- if you would like to know more about mine I'm on:
https://hughwill69.wordpress.com

I wish all luck in their finding the flattest routes.....
Hugh
Top

Yes Will great to hear from the founder of the Wimps

Indeed, if it hadn't been for you starting this thread I probably would still be wanting to do Lejog. As it is I commented and am now a successful Lejog rider. Thank you
Top

I see landsurfer has resurrected the Wimps this time riding aC2C details on the expedition section. I hope it's as successful as the Wimps Lejog
I'm not getting older,just gaining more experience
Top

softlips wrote:I’m doing the Seascale to Whitby coast to coast in one day at the end of the month. Think it’s around 155 miles (and has an incline or two).

Is that the event a woman from London died on today? On the descent from Wrynose I believe.
Closed roads and compulsory helmets seems to becoming a lethal combination especially when hills are involved.
Whatever I am, wherever I am, this is me. This is my life

According to cycle weekly it is the same route Paul, tragic! Helmet for me is usually worn but I respect those who don't use them. Personnel preference I feel
Top

A year ago today! 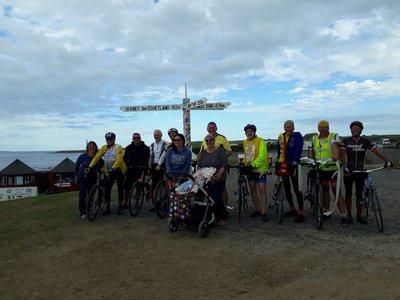