Specific board for this popular undertaking.
Post Reply
12 posts • Page 1 of 1

After many, many years of saying I will do LEJOG one day, I have finally put a marker down to get it done this year…

Having recently been made redundant I have found myself with a time window, and I know that I if I don’t grab now, it might be another few years of trying to find the time to fit it in.

I have been lurking the forum for 3 or 4 years, so have done a lot of reading and mentally putting a route together over that time.

Interestingly, when it has come to it, I have decided that the logistics of doing JOGLE are actually going to work better for me – I live in the Surrey Hills so it’s a lot quicker and easier to get home from LE, especially if I can persuade the good lady wife to come and pick me up from LE (with the promise of a few days in Cornwall at the end of the trip…)

I have spent the last few days sorting out a flight to Inverness (courtesy of Avios points) and will probably take the ‘Bike Taxi’ that has been mentioned elsewhere from there to JoG; staying overnight in the Sea View hotel before setting off on what I hope to be a 9 day ride that has a good balance of speed, quiet roads, and countryside.

I will be using B&B’s and also dropping in on a couple of friends along the way – luckily these are not too far off route.

*Take in Dennet’s Head and Lizard Point along the way

*1000 miles covered during the ride

*Pleasant cycling (which for me is a good amount relatively car-free roads, nice scenery,

and the occasional testing climb, but not hills for the sake of hills)

The plan is to go superlight, post things ahead, make the most of the free soap and towels at the B&Bs! There’s a chance of getting a bit of support along the way from friends (which I hope will also help with travelling light). For what it’s worth I’m a regular cyclist and 200 miles per week is about average (when the sun’s out), but that will increase now that I have a bit of time on my hands in-between job hunting.

I would really welcome some thoughts/comments/advice on the route as it stands at the moment.

As you will see it is almost all based upon various recommendations picked-up on this forum – notably the Cornwall sections (thanks Mick F) and the route around Bristol (thanks to wjhall, bikepacker and whoof), although I would still welcome reassurance that this route will work. Especially using a carbon sportive bike…with 25mm road tyres…

I think that I have a decent route into Sale, but less sure about the stretch between the ship canal and Preston, so local knowledge on that section would be great. But any general advice or comments on any part of the route would be really helpful.

Take a look at my post in the message ' Whats the flattest route out of Cornwall and Devon' for the routes we took out of Cornwall and Devon. Ok we did it LEJOG way and went up ultimately through Gloucester (because live in Worcs), but its worth comparing your route with the one we took. There are so many ways through Cornwall and Devon, there is no 'best' way IMO because of the nature of the terrain and roads. You just have to make the best judgement you can under the circumstances. For me, the route we took was OK.
Dont ignore Travel lodges and Premier Inns. Provided you book far enough in advance you can get reasonably good prices.
Top

There's a lot of similarities with our routes north of Three Burrows.

I'm looking at taking in Lizard Point on the way to Lands End, so I'm going to have to 'head south' at some point, and having ridden a route south from Pennance a couple of years ago (I think on MickF's recommendation) I know that there is some nice countryside down that route. I'm less certain of the A394 from Helston to Penzance, but there don't seem to be too many other options...
Top

Looking at your route into Sale you seem to be using a lot of off-road routes from Preston heading south (some of which are of dubious surface quality - grass & earth/mud stretches on towpaths for example - unless they've been improved recently) & taking a big loop south & west to cross the ship canal at the Warburton bridge when a crossing nearer to Manchester & coming the other way into Sale along the Bridgewater Canal could probably save you best part of 10 miles on similar (possibly better) off road surfaces & similar roads.

Some of the off road routes can be really good - although they aren't fast in absolute terms they are steady as they often don't have many junctions to have to slow or stop for or much in the way of hills (I happened to have done a loop down that way mostly on the Bridgewater Canal - plus a bit of the Trans-Pennine Trail - one evening last week & averaged 13.8mph but only had a max speed of 19.5mph, also only 170ft of ascent in 19.5 miles). Parts of the Leeds Liverpool canal are pretty good, other bits much less so, especially if it had been raining.
Top

I keep tweaking away at the route. I am still getting to grips with RidewithGPS. It certainly takes you down some 'interesting' paths if you auto-route and don't keep an eye on things...

The other thing that I am finding quite strange is that I have spent so long thinking I was going to do LEJOG that I keep having to remind myself that I am doing JOGLE and traveling North to South, not the other way around!

I have rejigged the section you mention to cut down on 'off-road' sections - concerned about the potential for rain and poor surfaces I am now thinking of trying to get more of a quiet road route rather than car-free.

I can't see any other crossing near to Sale without going all the way to Barton? But I guess that does put you right on to the Bridgewater canal as you said.

I'm also not sure that I'm not overcomplicating getting through Preston, I seem to have found a route through that avoids the A6 Garstang road, but Google street view seems to show that there is a 'cycle lane' on the A6, which might be an easier and quicker option?

The working copy of the route is here:

Any other comments would be gratefully received.
Top

FasterFerret wrote: I'm less certain of the A394 from Helston to Penzance, but there don't seem to be too many other options...

Having ridden just about every road in Cornwall, the Helston area is my least favourite by a long way.
The A394 is ok at the Marazion end, but as you near Helston, it's not nice at all.

The A394 is the furthest south you can go as a through route. There are ways down to the coast, but they are little circuits and not as any way through to the next one. Only option Helston/Penzance other than the A394 is to go inland ............... or just grin and bear it. 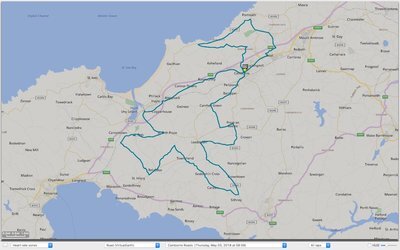 I am looking at quite a long final day, currently at about 130 miles from Okehamton to Lands End via Lizard Point; so I guess that I am going to have to follow your second option to 'grin and bear it'

If you're heading west towards Helston from Lizard, there's a good cycle track to the side on the A3083 past RNAS Culdrose.
Traffic there is fast and they don't like bikes on the road! I reckon all the cycle commuters use the cycle track and the vehicle drivers expect you to do it too.
https://www.google.co.uk/maps/@50.07997 ... 2!1b1!2i52
Mick F. Cornwall
Top

Good tip. I'll keep an eye out for that.
Top

...I have rejigged the section you mention to cut down on 'off-road' sections - concerned about the potential for rain and poor surfaces I am now thinking of trying to get more of a quiet road route rather than car-free...

Any other comments would be gratefully received.

Your changes seem to have gone a bit to the other extreme the roads either side of the Warburton Bridge aren't great - often busy, narrow in places & poor surfaces.

Here is a suggestion for the section from Hindley (just past mile 554 of your route current) to Sale. It is about 4 miles shorter, uses mostly traffic free from Leigh (but with generally good surfaces - new path alongside guided busway opened in 2017, former railway line with a decent surface & the Bridgewater Canal.

Good luck! 9 days is tough. I'm currently half way through a 10 day lejog and that's hard going, but enjoyable

I really appreciate you taking the time to do that for me. You can't beat local knowledge.

Just one question though - the dogleg down to Leigh. Is the NCN55 route bad/unsuitable between Hindley Green and Tyldesley? Or the A577?

From what I can see of that Guided busway on Google streetview it does look like that could be a very nice route through to Trafford.
Top
Post Reply
12 posts • Page 1 of 1