by Mick F
Day 2
You come up out of Camelford and turn east onto the A395, then you carry on to Piper's Pool.
Not good.
Ok, but not good.

Instead, turn off for Tresmeer and Egloskerry to St Stephens (just north of Launceston).
Drop down the hill to the Spar shop and turn left, then first right. Carry on along and turn right at the T junction, then out onto the Old A30 at Launceston Rugby ground, turning east to cross over into England. 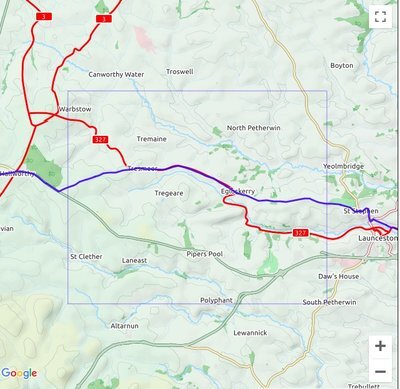 Mick F wrote:A49 must've changed then.
I was last up there spring of 2014 and rode Leominster/Ludlow/Church Stretton/Shrewsbury/Whitchurch with absolutely no bother at all. It's a good cycling road considering it's a major trunk road ........... or at least it was, and I've ridden it loads of times.

Each to their own! I hate it - fast traffic, close passes, and you can't see that much of the pretty bit because of the hedges (apart from the hills round Church Stretton, obviously). Whenever I've ridden it it's because you can't really get onto some of the lanes any other way, particularly the lovely back lane from Acton Scott, round the back of Ragleth Hill, into Church Stretton. But other than that, the only reason I'd ever ride it is if minimising climbing was a priority.

by Mick F
I've done it as a form of "getting North/South" and usually during 100mile days.

Last time was Ledbury to Shrewsbury but it should have been Ledbury to Overton (SW of Wrexham) but I had to miss Overton out so stopped short.
Next day I did Shrewsbury to Manchester. Previously, it was Ledbury/Wrexham and also the other way on any number of occasions.

Always A49 out of preference.

by FasterFerret
Day 3 - Okehampton to Taunton

I think that you have found an interesting route here. I would be interested in the opinion of others on this route.

Seems to me to be about the same mileage and elevation as the usual route recommendation, but it takes out the A38 which is another one of those busy roads that some people will say is fine and I will say it would not my first choice having ridden it on my route.

by Mick F
Main comment on Day 3 from me is that it's a bit difficult to navigate.

Very straightforward is Okehampton/Bow/Copplestone/Crediton/Rob's Passage/Bickleigh/Tiverton.
This gives a good steady route and takes you through towns and villages where there are cafes and shops.

Crediton has a couple of cafes, and loads of shops, and a bike shop too.
Tiverton has the bus station where there's a supermarket and a cafe and somewhere to sit on benches under the shade of the trees.
Rob's Passage is a delight and well worth it.

From Tiverton, you cross over the M5 and join the A38 at Waterloo Cross. It a quiet road generally but with the odd lorry going past to the quarry. Turn off into Wellington for more shops, cafes, and a bike shop. Back on the A38 again, cross over into Somerset and head into Taunton.

by Mick F
PS:
Don't bother with the Granite Way.
It's ok at the Lydford end, but when you get past Meldon, it's not worth the effort.
Far better on the roads.

If the OP plans to stay at the Travel Lodge at Sourton, come out and turn left, do about half a mile to a small crossroads, turn right down the lane and this will bring you out on the Old A30 into Okehampton town. Downhill all the way! 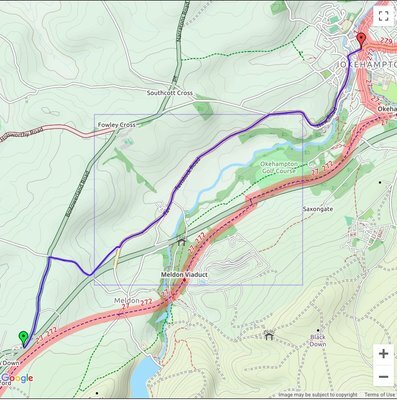 by stephenjlynch
Thanks everyone - some really useful advice (and most of it taken on board). Decided to add one more day in northern Scotland to have shorter segments so we can enjoy it - now doing Dingwall - Lairg, Lairg - Bettyhill, Bettyhill to JOG.

Day 9 - Kendal to Carlisle - https://ridewithgps.com/routes/28564557
Changed to route over Shap rather than a potentially hilly diversion

Day 10 - Carlisle to Abington - https://ridewithgps.com/routes/28566620
Modified for better route through Gretna and Crawford

Day 16 - Dingwall to Lairg - https://ridewithgps.com/routes/28538331
Modified to stay on the NCN1 at Ardgay before joining main road at Invershin. End has changed from Altnaharra to Lairg. Kept the longer less hilly route via Tain as co-cyclist wants to visit Glen Morangie

Day 18 - Bettyhill to John o'Groats - https://ridewithgps.com/routes/28538589
Shorter route so we can enjoy ourselves with the optional diversion to Dunnet Head

Between the points you have, presumably accommodation, this would be my route. Less than 50mls. You won’t go through Penrith with it but if you need food there’s a good cafe behind Go Outdoors as you pass it.
Sorry i can’t do routes in RwGPS. I’ve done that in MapOut which does give a gpx file if you want it dm your email addy. 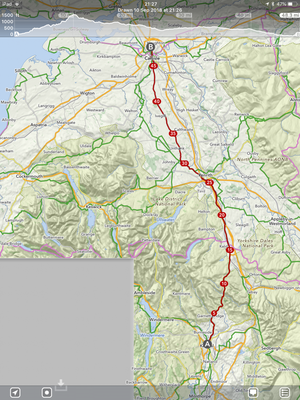 Between the points you have, presumably accommodation, this would be my route. Less than 50mls. You won’t go through Penrith with it but if you need food there’s a good cafe behind Go Outdoors as you pass it.
Sorry i can’t do routes in RwGPS. I’ve done that in MapOut which does give a gpx file if you want it dm your email addy.

Strange as it may be, I think that the stretch between (Dalston) Ivegill and Unthank was one of my favourite bits.

by althebike
That certainly is nice view. When I went there I was cycling in the other direction and did not see much of the sea views. It was a very windy day and everything that could move seemed to be trying to cram into Bettyhill cafe. I reasoned that the hotel would be better geared for guests while the cafe better geared for refreshment, but as you have pointed out, there was a flaw to this logic.

4 years ago I met a chap on that road who was walking JOGLA
Only 65 years young.

by Ron
Unless you had some specific reason, you might wish to reconsider a section of Day 16, the planned route takes you on to an un-surfaced farm road and involves unnecessary climbing.
Suggested amendment*
Day 16 At 11 mile point turn left on to B 9176, *then after approx 200 metres turn right on to the B817 and follow the B817 until it merges with your planned route near a bus stop at west end of Alness*.

Also on Day 16, I trust you are aware of the need to carry your bike down a flight of stairs at the river crossing between Ardgay and Invershin?
The route in your plan is mostly single track but the alternative route via Bonar Bridge is double track and although it carries more motorised traffic this is unlikely to concern you, also there is a shop in Bonar if you need to top up with food or drinks.
(The route with the stairs was drawn up to pass close to Carbisdale Castle youth hostel, alas the hostel closed down years ago.)

by Fat tyre kicker
Please forgive my ignorance, what is JOGLA ?

by geocycle
Day 8 uses the Lancaster canal. It’s not bad and has great views but the surface is degraded and potholed which along with lots of narrow bridges and dog walkers makes for a slow ride. It gets worse beyond carnforth.I do use it but wouldn’t normally recommend it to end to Enders looking to achieve big mileages. A quiet option from Lancaster would be Halton via Lune cycle way, nether Kellet, over kellet, Capenwray, then on to the relatively quiet a6070.

Fat tyre kicker wrote:Please forgive my ignorance, what is JOGLA ?