Specific board for this popular undertaking.
Post Reply
57 posts

Seriously, if you did a video blog on YouTube, Weatherspoons would definitely feed you every day for free!
Top

Every day's a schoolday. I'd heard of Tranmere Rovers but couldn't have put a pin on the map for Tranmere until I cycled through it on my way to the ferry at Birkenhead. No need for fancy back streets, straight along the A41, a massive dual carriageway. After 9am very little traffic. A painted pavement cycle path if required with the usual costs of poorer surface and surrendering priority at junctions.

I decided the main road was fine. A local driver thought otherwise. Despite the outside lane being clear he preferred to sound his horn to try and get me out the way rather than mirror signal manoeuvre. After I wasn't intimidated out his way he overtook and when we both stopped at a set of lights he got out his car to tell me to get off the road. Before I could reply the light went to green and the van driver behind sounded his horn at the driver
This was in a 30mph limit and I was doing around 20 with a tailwind. Just one of the local villages not keeping their idiot under control.

First ferry was 1030 so I had time for breakfast before crossing the Mersey. When I did my previous LEJOG 20 years ago I took the canal towpath out of Liverpool until it turned to mud then threaded my way along back roads. Nice, but slow. This time having checked it out in Google maps I joined the A59 north of the motorway and just stayed on it. Absolutely fine. A mix of good quality roadside cycle facilities and wide roads with plenty room for following traffic to pass without needing a gap. Traffic light until nearer Preston anyway. Simples.

Bit of a rest day today as it was short, flat, and wind assisted. But why not? It's the end of week 1. 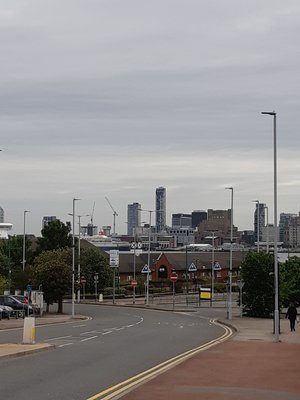 Nearly at the ferry. 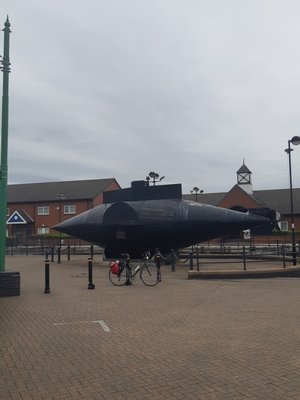 Shouldn't it be yellow? 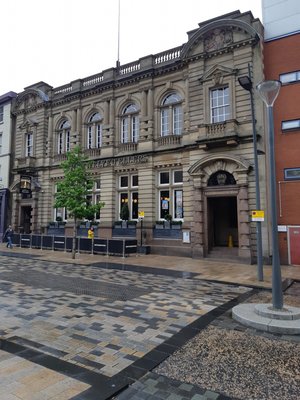 In Preston. Another old bank saved by Wetherspoons

So I've wrapped it after what I think was a bit of food poisoning. Anyway after an uncomfortable night I waited until late morning then set off up the A6 for Lancaster to try and ride it off. No joy. So I went into Lancaster station and 30 minutes and £34 later I was on a train for Glasgow. Feeling better today but still well short of fit so I think I did the right thing stopping. I've still got next week off so may get a few days away on the bike.

Routewise A6 Preston to Lancaster was fine. Light traffic most of the time and either good cycle lanes or wide roads.

Overall - a shame I didn't finish but no mechanical problems with the bike, not even a puncture and other than the busy road for 11 miles or so south of Hereford enjoyable riding the whole time.
Top

Hopefully you'll be perfectly ok in a day or two.
What caused it? Chicken perhaps?
Mick F. Cornwall
Top

Very sorry to hear that, I was hoping the strong SW wind would be blowing you past me at some point today! Bikes and stomach problems are not a good mix so I'm sure you did the right thing.
Top

That’s a blow you had the best bit to come. Hope it wasn’t one too many Weatherspoons.
Whatever I am, wherever I am, this is me. This is my life

What bad luck - that's a real shame. Hope you can still salvage a nice holiday next week.
Top

So sorry to hear it.

Do you plan on repeating it?

Considering a few days walking in Cairngorms next week.

In many ways the bit I got done was the best as I have had a good number of other tours in the Highlands as they are local to me. Riding back roads through English villages is a total change of scene.

These things happen. At least I was close to an easy train home.
Top

Jamesh wrote:So sorry to hear it.

Do you plan on repeating it?

I've not decided yet. Part of my motivation was thinking that I could improve quite a bit on my previous route from Lands End to Carlisle. And I did.

1 1/4" to mile Cornwall maps not adequate resulting in big sections of A30 being use which while fast wasn't enjoyed. This time 1/2" maps back up by smartphone and using Mick F's route far better.

2 Day4 Street YHA to Welsh Bicknor went daft route straight up and over the Mendips. This time Bridgewater to St Briavels via Strawberry Line and back roads to M5 bridge was easier flatter and more direct.

3 Days 5 and 6 able to almost completely avoid A49 using better mapping and smartphone. More pleasant cycling with no real distance or height penalty.

4 Liverpool to Landcaster. Rather than towpath and back roads to Preston followed by Forest of Bowland I went more or less direct on the A59 and A6 both roads being fine midweek outside rush hours.

So I'm not sure if I'd go back and repeat the exact same route. Maybe go back and ride north from Lancaster? No rush to decide though.
Top

Good to hear you're feeling better, shame you had to call it off. I was enjoying reading your daily updates.

Maybe go back and ride north from Lancaster?

My favourite part that: once north of Preston (and you're right, it has more than it's fair share of idiot drivers) you're onto some really nice lanes running up towards Lancaster with the choice of coast road up through Glasson Dock or foothills of the Trough.
Past (or through) Lancaster and on up to Kendal is a lovely run of (slightly lumpy) country lanes, you only have to cross the A6 once or twice. I really like that area.

Sorry to hear about the broken trip irc, was enjoying your posts, particularly pics of some fine looking spoons stops - was directed here from the spoons thread.
Sweep
Top
Post Reply
57 posts