I'm planning my Jogle route and have heard of Rob's Passage. Has anyone got the route for Rob's passage?

by Mick F
There's lots of references to it on here.
I named it Rob's Passage after a chap on here years ago - RobS - who described it. I've been on it loads of times - and in both directions - and it's brilliant.

I don't subscribe to Strava or any route websites, but here's a map of it. Someone may come on with a link to a GPX later. 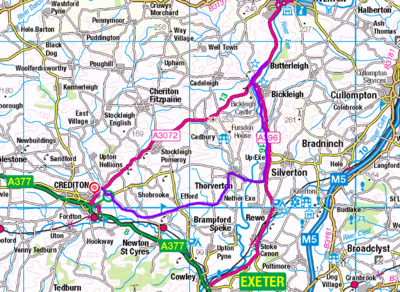 by shadwellrhino
I think this is the route:

by Mick F
That's the one!

by shadwellrhino
It was a great route courtesy of Rob and MickF - the profile shows just how flat it was.

In Tiverton there is a cafe and a supermarket right by the bus station, also a nice seating area under the trees. Excellent lunch stop.

by Mick F
PS:
Just zoomed in on that link for Google Maps of Tiverton bus station area.
Is that my Mercian?
I doubt it, but it did make me jump when I saw it!

by Herts Audax
He avoids the A3072 between Crediton and Bickleigh but instead custs across to the A396 then on to Bickleigh. Is that section of A3072 particularly bad or was it just the timings of when Rob did his ride?

by Jamesh
I didn't do Rob passage but found the more direct route hilly but doable. But if your carrying full camping kit it might be otherwise.

There is a decent hill in the middle but once your up it its downhill to Tiverton.

I had a fellow cyclist Jason say he was going that way so I rode with him and enjoyed his company.

Him and Ken were the only two cyclists I rode with.

by Mick F
The A3072 goes over the Cadbury Hills.
No real big deal, but if loaded and tired, Rob's Passage and then the main road Bickleigh to Tiverton is flat. Couple of slopes on the main road to Bickleigh though.

If you were to use it JOGLE instead of LEJOG, you would be very grateful indeed, as the A3072 up Bickleigh Hill is a killer. I've done it a few times, the first couple because I didn't know any better, but done it since just for the hell of it.

by Herts Audax
Ah thanks for that, makes sense
All times are UTC
Page 1 of 1
Powered by phpBB® Forum Software © phpBB Limited
https://www.phpbb.com/