Specific board for this popular undertaking.
Post Reply
57 posts

I’m planning to do LEJOG in June if 2020. I’m from Nova Scotia, Canada and I would like to tent/camp on this trip. I’m look for information on tenting in the UK, especially as it pertains to LEJOG

Thank you &
All the best,
Daryl
Top

Put in your days start and end points and select get route. You can then move intermediate points on the generated trail to give you your planned route. Then select Camping from the Hotels and Accommadation drop-down and 'find' and then click on the tent symbols for information.
The below shows the return for Launceston to Exeter. 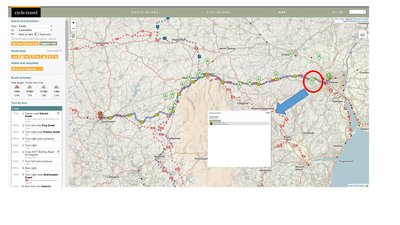 If it's your thing, then wild camping is also permitted in Scotland, there's a few restrictions, but basically on uncultivated land at least 30 m from the roadside and you're OK.
In England and Wales, there's plenty of sites so I wouldn't let it dictate your route, they do vary greatly in facilities, atmosphere and price, so it might be an idea to get the general route mapped out and then ask for recommendations.
Top

I also cycle-camp.
I tend to rough out a possible route on a route planner.
Then I use the likes of "https://www.ukcampsite.co.uk/" to find any/every possible campsite along it.
Once found then I'll firm up the route.
But there's very few places in the UK where you cannot find the next campsite within 50-60 miles of the last.

I’m planning to do LEJOG in June if 2020. I’m from Nova Scotia, Canada and I would like to tent/camp on this trip. I’m look for information on tenting in the UK, especially as it pertains to LEJOG

Thank you &
All the best,
Daryl

You probably won't get better than Archies camping for camp sites. Tried, tested and works .

A small fee for Android / Apple but free as POI's on a Garmin. You can also download to windows and combine it with https://cycle.travel/map for advance planning when working out your LEJOG route.
Top

Figure out your distances and start end points.

Then look on Google maps for campsites using campsites nearby.

Jamesh wrote:Figure out your distances and start end points.

Then look on Google maps for campsites using campsites nearby.

Give us a daily distance and I'm sure the forumites will love to sort a route and campsites!!

ossie wrote:You can also download to windows and combine it with https://cycle.travel/map for advance planning when working out your LEJOG route.


The campsites on cycle.travel are from archiescampings, so there's no point in unnecessary work.

For your trip, it may well be worth joining the Camping and Caravan Club (£40).
As well as the club sites (£10 +/- for non-members, ~£2 less for members, backpacker rate), there are a lot of "certificated locations", which in some areas would be just about the only sites other than caravan-only places.
If you do a map search on ukcampsite.co.uk or google the sites that archiecampings shows on cycle.travel, you'll see many of them showing up.

Officially, the CCC certificated locations are members only. That may or may not be enforced, but it's difficult to tell beforehand whether it's the case or not.

Note that sites listed on archiescampings (and hence cycle.travel) may be caravan only or CCC certificated locations. It would be best to check all sites on ukcampsite before planning on using them. I don't say you couldn't blag your way on to some caravan-only sites, but some would be hard standing only, or no toilets.

Once you get to Scotland, wild (off site) camping is permitted*, subject to being normally considerate, but in England & Wales it's not, so if you do it's a matter of trying not to be noticed, pitching late and striking early. It's unlikely that the consequences of being caught by some landowner would extend much beyond being made to move on immediately.
* (some restrictions around Loch Lomond & the Trossachs, owing to neds from Glasgow being a nuisance with drinking parties and open fires)
Top

ossie wrote:You can also download to windows and combine it with https://cycle.travel/map for advance planning when working out your LEJOG route.


The campsites on cycle.travel are from archiescampings, so there's no point in unnecessary work.

For your trip, it may well be worth joining the Camping and Caravan Club (£40).

Although cycletravel links to Archiescamping it doesn't link to the campsite itself, it simply takes you to the Archies home page. Perhaps I'm doing something wrong ? The windows version of Archies will link straight to google for reviews / pics etc. I use a split / screen so no harm in having both when planning.

Further for the OP: Archies camping can be used on a Garmin (which is my primary source of navigation). The camp sites are downloaded as POI's and you have the ability to navigate to them. Although I use cycletravel to plan my GPX routes I'm not sure there's any ability to view / download camp sites from cycletravel to a Garmin.

The Archies camping app is also far superior and user friendly on a phone than the cycle travel map in relation to the camp sites themselves. You have the ability to link straight to their phone number without typing it in/ google reviews and of course navigate directly there. Cycle travel offer up a phone number and a link to archies but not the actual site itself.

Cycletravel is a brilliant resource and getting better but I use both Apps in a split screen both when planning on my PC and also on my phone on tour when closer to the end of my cycling day. That said I'm a little old school so if any of this is wrong, forgive me.

Reference the Camping and Caravan club, many sites will simply let cyclists on without joining at the back packers rate. However last month I arrived at Hertford from Harwich after a European tour and they insisted I join....for free. A telephone call in advance would confirm.
Top

Thanks for the many replies everyone. It looks like I'm not without options. The support from the forum is awesome.

I'll have a detailed look on the weekend and I'm sure I'll have additional questions, like what "hard standing" means.

All the best,
Daryl
Top

...oh and can you reply to a specific post/comment?

Freelander wrote:I'm sure I'll have additional questions, like what "hard standing" means.

Not grass, something you won't get a tent peg in.

It's parking areas for motorhomes or caravans (trailers), where they won't get bogged down in wet weather.
Concrete, asphalt, or gravel usually.
Top

Freelander wrote:...oh and can you reply to a specific post/comment?

Click on the double quotes button to the top right of the post you want to reply to, and you'll get something like this:
[quote="Freelander"]...oh and can you reply to a specific post/comment?

It's all freely editable, and provided that you don't change the opening and closing tags (in square brackets), it will appear as at the top. It's normal to put your reply after the closing [/quote].
In this case, I did change the opening tag by inserting an italics tag in the middle of "quote", which breaks the tag and changes it to plain text.
Last edited by andrew_s on 4 Oct 2019, 1:19am, edited 1 time in total.
Top
Post Reply
57 posts