Specific board for this popular undertaking.
Post Reply
4 posts • Page 1 of 1

Following on from my other thread, here’s my view as Taunton local about the best ways out of Taunton and to get up to Bristol. As with the other thread, yes you can always just go up the A38. I don’t like that road and wouldn’t want to myself. I also think that the best option is to aim for the Shute Shelve Tunnel, as this gets you through the Mendips without having to venture near Weston and without a large amount of climbing. If you like those things then there are other options (want to climb up Cheddar Gorge? Go for it, it’s fantastic). I’ve also aimed for the Avonmouth bridge, if you want to go into Bristol or to the east of Bristol there are alterations you can make.

There are other options out of Taunton (over the Quantocks for example) but these can include busy roads, more climbing, or routing through towns.

This route takes you along the Taunton to Bridgwater canal, then over the river Parrett on the new bridge on Squibbers Way, then back onto NCN3 and makes use of the very nice path under the A39 at Cossington and onwards to Wedmore. Don’t forget to stop at Maunsel Lock Tearooms! The canal surface is generally ok for touring bikes, but some of the bridges can be a bit narrow and there are 2 gates than can be a little annoying. The Space Walk is nice to look out for, but if you follow the bike route you’ll miss the inner planets which are on the section of canal path not set up for bikes. Following the canal is also a very easy way to get out of Taunton centre, and if you wanted to hop onto the option 2 route you could do that at Creech St. Michael.

Taking back roads out of Taunton through Ruishton, Creech St. Michael, Ham, Knapp, past the best café in the area (At North Curry), through Athelney, then along some quiet (ish) A roads past Burrow Mump and Othery, over the A39 to Shapwick, then onwards to Wedmore. Current path through junction 25 of the M5 is a little bit of a nightmare because of road works, but supposedly there’s going to be a nice new path at some point…

From Wedmore I'd go up to Cheddar, pick up the Strawberry line all the way to Clevedon (apart from the bit in Sandford as the off road path around the back of some of the Thatchers fields is a bit of a pain. You can just go through the village and pick the path up after this section though), around on the Avon Cycleway to the Avonmouth bridge. As well as cutting out a lot of climbing by using the tunnel you also get to go past the cafes at Sandford station and the nice one at the Clevedon Craft Centre. 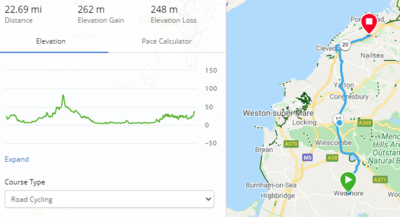 Whoof put his route mentioned on the Exeter to Taunton thread here - https://forum.cyclinguk.org/viewtopic.php?f=22&t=141033#p1532707 which as a slightly different route as well and looks good

There are other ways out of Taunton which are good (over the Quantocks for example) but can add additional climbing or navigation through the town.
http://www.onesti.co.uk
Top

Going south from Seven Bridge crossing (Monmouth) and Avonmouth M5 bridge, what would you recommend to Wedmore?
(Route of least resistance Tintern to Taunton next year ?).
You'll never know if you don't try it.
Top

cycleruk wrote:Going south from Seven Bridge crossing (Monmouth) and Avonmouth M5 bridge, what would you recommend to Wedmore?
(Route of least resistance Tintern to Taunton next year ?).

From Avon bridge south you can use my routes, north though I’ve only done it once or twice, I followed the NCN route each time...
http://www.onesti.co.uk
Top

The canal is nice, but not the quickest. you also have to decide where you’re crossing the River Parrett, Bridgwater or Burrow Mump. Some nice flat and quiet lanes out to Burrow Mump and the A361 isn’t the worst A road experience on that side of Taunton. A couple of nice RSPB reserves out that way as well.
Top
Post Reply
4 posts • Page 1 of 1