New to me Azub Origami

DIscuss anything relating to non-standard cycles and their equipment.
Post Reply
30 posts

Icletta has the Terracycle parts in stock so they are on their way. I will have to cut the mast to the right length - carefully

Or I try to sell the bike on. However even with the OC bars, the fold wll work fine for putting it in the boot of the car so if I want to have an easy to transport 2-wheeled 'bent this is still the best option. And having invested such time and effort improving the spec it seems a shame to ditch it.

I need to confess that the Bacchetta locking stem broke because of user error. There are 3 bolts on the front of it, and I misread the different torque specs. I applied 7Nm to a 5Nm bolt and it fractured the stem.
Top

Terracycle parts arrived promptly. The mast is very long, around 22" and not telescopic so I'm trying to set it up on the bike and and adjust the cockpit to work out where to cut it. Clearly the mast has to angle back slightly with the bars in front of the knees and the handgrips reachable with modestly bent arms. I've brought the seat back a couple of inches to be more like the Giro 20 I had rather than the failed Metabikes conversion to open cockpit I attempted. It's complicated because of all the compensating adjustments: boom length, seat back angle, mast angle, stem height, handlebar rotation. It looks like I will have to change all four cables for longer ones since they'll need to route along the front of the bars and down the mast. I will leave an extra inch on the mast when I cut it to allow some adjustment. There's also a couple of inches adjustment with the mast insertion on the folding stem.

At the moment it's reminding me of my Giro 20, though it has the hard shell seat rather than the Recurve seat I had on that. I will have some heel/front tyre interference now I have moved the seat back, OTOH the seat is a bit lower and it's easier to mount and dismount.
Top

Still work in progress but here it is with mast cut down to 12.5" and extra foam in the top curve of the seat to make the seat feel more upright whilst still providing a cup for my backside. I might get away with only changing the FD cable. The bars are quite narrow so I'm concerned about the trigger shifters catching my thighs. 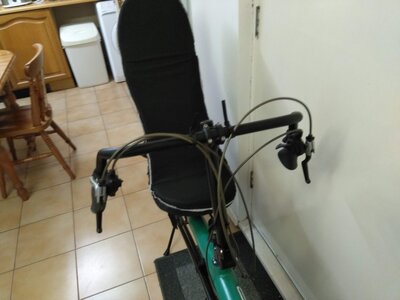 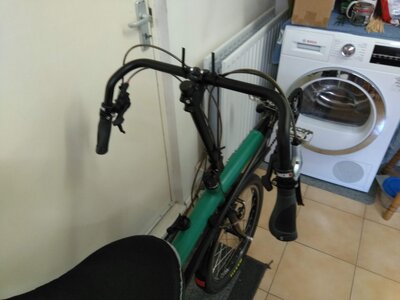 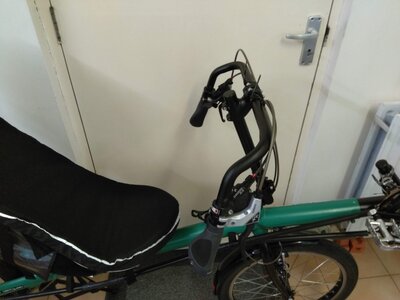 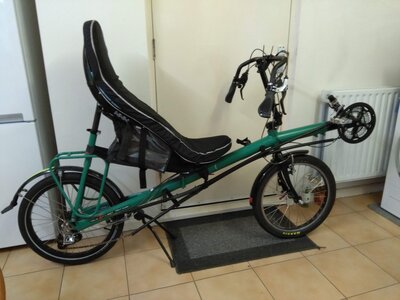 Would you be better off with bar end shifters? I might have some in the shed (I mean, I know I have a RH shifter in the shed that is 8/9 speed, no idea where the left one is).
If I had a baby elephant, it would point out that there is no evidence for planing. Then it would eat all my bananas.
Top

Here it is all neat and tidy and ready to ride with a front twist grip shifter and longer cable, 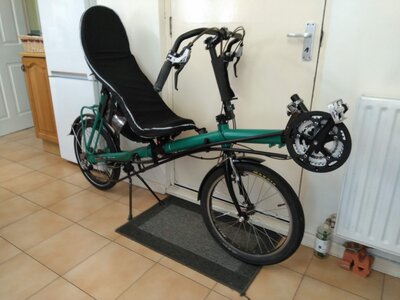 So I took it out and .. the cockpit felt cramped and on slow turns my left shin was scraping the handlebar. The top stem is at the top of the mast, so there's no more adjustment there, but I can raise the mast on the lower folding stem. However, the bars are a bit close and the mast is too vertical and needs to come back more so that it doesn't fold forward during normal steering.

The solution to both problems is to replace the 75mm stem shown with a longer top stem which angles up. As delivered it came with a short 60mm stem. I have placed an order for a 135mm stem angled at 35 degrees. Unfortunately I think I've reached the limit of distance for the existing cables so I may have to change them all. Grrrr!

Fitted the new stem and had a quick test - much better. Will fold it and put it in the car tomorrow for a ride with a friend. So far I have got away with not changing the cables but they are near the limit so will be watching carefully when I fold it. Notice the lack of front mudguard stays. I've secured it with a bridge on both sides of the fork: 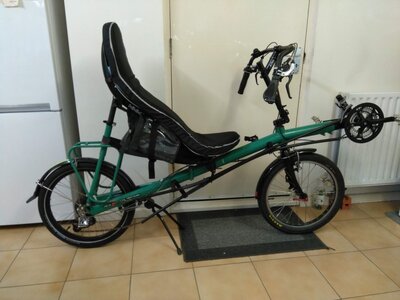 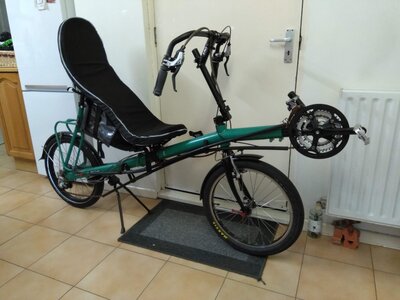 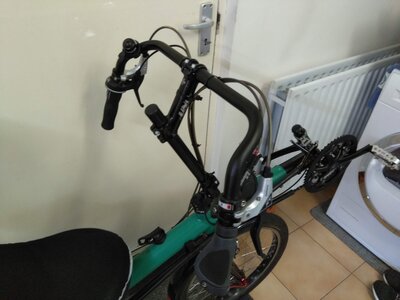 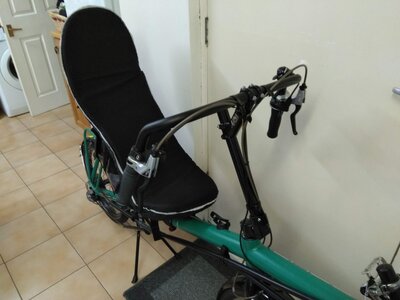 This is the first time I've read your thread and I've found it really interesting. Over the years I looked at various recumbents at York Rally and I knew a couple of satisfied owners, but one thing that put me off was the range of designs, as if the concept was still being developed. Twenty years ago I treated myself to several new bikes but stopped short at a recumbent.

This has also prompted me to google and the first hit was this US vendor.

Reading between the lines, it's a niche product that hasn't raced off the shelves. It doesn't seem cheap and at just under 30lb for one without accessories, it doesn't sound like the sort of machine you might use for commuting in conjunction with public transport.

The previous owner of yours sounds to have messed about with it for whatever reason and you have had a couple of years of experimentation/ development. Have you an opinion of the underlying bike?
Top

There are numerous reviews of the Origami out there and there is little doubt that it's a fine bike. Not fast but easy to live with. It's main weakness is having small wheels with no suspension. It's too early to say whether or not this is going to be a problem for me. I'm hoping the long wheelbase, 2" tyres at 35psi and the seat pad will suffice on UK roads. For me the other plus was the integrated rack positioned not to upset the handling.
Top

I was interested in your own review, rather than sales talk. eg On the matter of speed, the vendor in my link referred to somebody who took pleasure in overtaking racing bikes. Then, although they were referring to the non-folding version, the handling in urban traffic was praised. Except that yours obviously wasn't off-the-peg, in that somebody else had adapted it, it does seem to be taking a lot to get it to your satisfaction.

This isn't meant to be any sort of criticism, btw, but me looking to widen my understanding of something I know so little about. And time on my hands during lockdown.
Top

thirdcrank wrote:I was interested in your own review, rather than sales talk. eg On the matter of speed, the vendor in my link referred to somebody who took pleasure in overtaking racing bikes. Then, although they were referring to the non-folding version, the handling in urban traffic was praised. Except that yours obviously wasn't off-the-peg, in that somebody else had adapted it, it does seem to be taking a lot to get it to tyour satisfaction.

This isn't meant to be any sort of criticism, btw, but me looking to widen my understanding of something I know so little about. And time on my hands during lockdown.

'Bents aren't new, they've been around since the 1930s and there are many established designs. It's not a case of one size fits all. I'm not tall enough to manage high racers and my balance when reclined is poor. Today was the first day when I opened up on the Origami - it sat around untouched for 15 months. I hit 23.5 mph max going round Goodwood motor circuit, average of 14.5mph. But when I got home I reinstalled the seat at a more reclined angle, went for a quick spin and it felt better. I have to decide now whether I'm brave enough to commute to work on it tomorrow.

I'll need to do some regular routes using Strave and switch between it and my RANS Stratus XP to get a handle on speed differences. I expect the XP to be marginally quicker.
Top

OK, well I made it there and back today without coming to grief. I did chicken out though at one uphill T-junction where traffic can arrive from 3 directions. The bike? As i said before similar to a Giro 20. The lack of suspension is very noticeable. I might have to lower the tyre pressures down from 37 psi to 32psi. Not a problem when pottering around but rather unnerving at 20mph+ on sunken drain covers etc. The folding handlebars fold momentarily because of forward pressure when you hit a bump and I'm being bounced off the front of the seat gradually. This causes my knee to start hitting the bars. So I will have to try tweaking the seat angle, handlebar height etc. It's very close to being right though. Had no heel strike on turns which was nice.

Transmission feels quire direct without an idler though sometimes it feels like the chain tube is slapping against something (the seat? the frame?). I noticed a squeaky seat on the way home. The glass fibre seat really amplifies any acoustics. Even the chain rubbing on the FD sounded like it was coming from below the seat.
Top

Going round the Goodwood motor circuit: 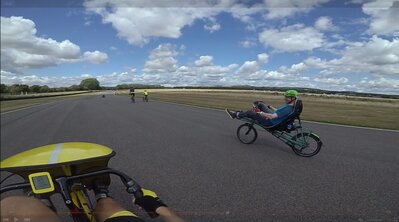 First laidback commute took me 50-100% longer than on the DF and I thought the very idea of choosing to do that would be crazy. About this time last year I had no alternative but to use the SPM and I got used to it rather quickly, though there are some junctions that I still wouldn't do on it.

A bit like being a beginner commuter cyclist 15 years ago.
If I had a baby elephant, it would point out that there is no evidence for planing. Then it would eat all my bananas.
Top
Post Reply
30 posts