Long time member, I lost my fitness, owing to circumstances, failed to regain it when I had the time again, & then moved to a hilly area.

I now find that an adult scooter is more for me, a 16" wheel Swifty Zero, but I am wondering how many other people now own such a two wheeler, or a kick bike.

(turned 70), don't like the traffic any more, & want to get back to getting some worth while exercise again, so am looking for other like minded members to bring this thread to life.

Many thanks for the links, folks.

Loving it, so much so, I just ordered a Kickbike Cross Fix.

Come on folks, who else here has one, surely there's more of us?

'Out' yourself in this thread - & let's keep it going with any chat about them.

I did see a couple in the wild yesterday evening late, looked like the riders were bike packing, I do regret not accosting and questioning them. Quite flat here
..
Care to tell us of your experiences to start with?
Entertainer, juvenile, curmudgeon, PoB, 30120
Cycling-of course, but it is far better on a Gillott
We love safety cameras, we hate bullies
Top

As per my intro - & I took my Swifty offroad on a gravel fire road, then down a rutted unmade road, where I discovered that the 16" wheels made for some lively handling on the loose stones, but great fun

, then went through an open parkland area, very hilly, both ways, up & down, had to walk the steeper ups.

Around about 5 miles round trip.

Been over on the gravel fire road a couple more times, but need to get out with my Kickbke Cross, now that I have it set up.

Whatabout braking, top speeds downhill? Longest trips, fatigue? Do you scoot with left or right, or both/either?
Entertainer, juvenile, curmudgeon, PoB, 30120
Cycling-of course, but it is far better on a Gillott
We love safety cameras, we hate bullies
Top

For anyone thinking about getting one, take a read of this....

Top speed - as fast as you want....downhill.

- along the flat - also as fast as you want to kick, it's sort of like running.

Longest trips - don't know that yet, but my 5 mile ride took 2/3rds as long as I regularly walk it.

Fatigue - yes, need to get used to it, legs do get a workout, especially the one you're standing on, but I wasn't out of breath when I got back home, like I usually am when I walk it.

Scooting - use both feet/legs - was awkward the first time out, I needed to switch to my other leg, but becomes habit really quickly
Top 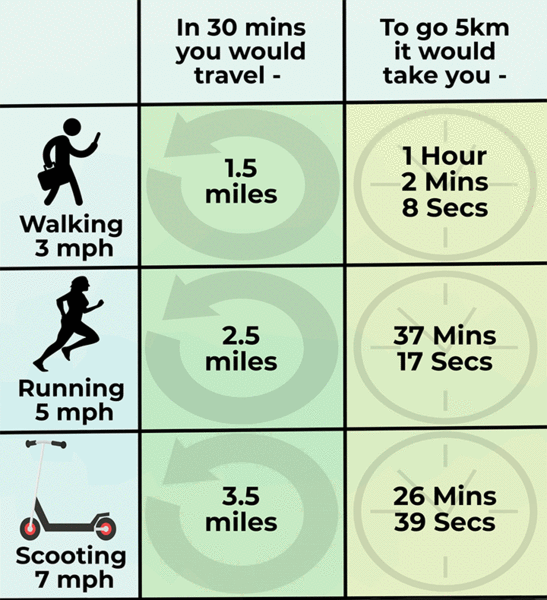 My experiences come from a year of scooting after a knee injury sidelined my first love of running. The major plus for me is that I’ve been able to get back to the running, but if anything I’m scooting more as well - it gives a very similar sort of experience to running, and also involves a lot more of the body (like back and arms) if you want to put in the effort. Of course if you don’t want to flog yourself you can go along easily and put in walking level effort instead.

Brakes? V brakes on my Yedoo Trexx, and there’s a project I’m building at the moment which will have Avid BB7s.

Speeds? To put in my own figures for mac’s infographic, I will walk 2.5 miles or so in half an hour, run 3.5 - 4 miles, and on the Trexx cover between 5 and 6. Roughly speaking for a given effort I go about 15-20% further on the scooter compared to running. Furtherest I’ve gone so far is 13 miles.

The physical similarities to bikes is very misleading. Apart from that it’s very different from cycling. Which is why instead of thinking of speed in MPH I think of it in mins/mile. The great thing about that is that I get to feel how quick I was running 25-30 years ago. The fact that you have your feet contacting the ground, the leg action, constantly changing stride to adapt to conditions, the effort level, all make me feel that it is very similar to running.

You won’t get far if you only use one leg - it’s the standing leg that tires first, and not the kicking leg. I swap every 6-8 kicks, less if it’s uphill. The changeover (the footboard is just wide enough to accommodate one foot at a time, to save on grounding in corners) becomes automatic after a while, either a shuffle change as mac described but there’s also the racer’s jump kick where you jump off the footboard with the standing foot whilst the kicking foot comes into position. I have found this challenging to learn (ending up with both feet on the ground!

) but it has its uses on climbs when you’re going relatively slowly and want to maintain momentum by keeping the propulsive force going with minimal interruption.

My Trexx spends most of its time on forest trails, when I got it I deliberately wanted something that could cover the same sort of ground as I go when running, and it can pretty much do so. If the going gets too rough at under 8kg it’s no problem to carry or shoulder. My plan is to orientate the Trexx more to off-road use and the project machine to be more suitable to tarmac and light trail use, though as it is it’s very adaptable. Like bikes you can get scooters for racing, for touring, for forest, for commuting.
Top

Just found this website, basically the sport of kick scooting....

A question for Swifty riders. How are your ankles? I ask the question after taking a chunk out of my left ankle while kicking and hitting the bolt nut that holds the back wheel axle. It’s the second time I’ve done it (this time the blood flow was impressive and the ankle is swollen and bruised), and that’s in addition to numerous minor ankle scrapes on the axle bolt. I’ve just looked at Swifty’s shop where it seems a solution is available - at a cost. Has anyone else had the problem? (If not, take care! It hurts like hell and it’ll keep me off the scooter for a few days.)