http://www.elliptigo.com/
My cousin's husband has one of these.
He has a problematic back and cannot ride a "normal" bicycle and didn't want a recumbent. He likes the upright/standing position.

They live up in Lancs, so next time we're up there, I won't be able to keep away from wanting a go on it!
It looks terrific fun 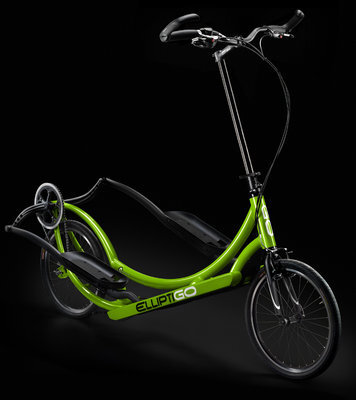 So how long before you take it on an end to end then?

That reminds me very much of a toy I used to have as a child. Four wheels, two pads that you stood on and it revolved the wheels. Can't remember it's name. Google searches and lists of "1990's toys" are deficient.
Top

Our girls had one each.

Had to go into a toy store with my mum just before I went to uni for first year, and I saw one. I desperately wanted one to get to uni on...

The far away pedal on that one needs clipped back in!
Top

I was pointed to this post by a CTC member and thought I'd address some of the queries I saw here. Just to let you know, I work with ElliptiGO and ride ElliptiGO bikes a great deal. I also ride with CTC touring groups in the winter off-season. In-season, my pace and mileage requirements are such that the CTC group rides are not challenging enough, but I'm not fast enough to ride with the carbon fibre racing bike guys either, so I often train solo (or with other ElliptiGO riders, when I can find them).

The ElliptiGO is major fun to ride and it is aimed at the fitness-conscious rider and also at runners. It is a bike which gives you the same fitness level as running, but allows you to move fast and far, like on a bicycle. It's not for those trying to get from A to B without working up a sweat, or for those trying to go as fast as possible using as little energy as possible - it is intended to make you really fit. However, most of the ElliptiGO riders I know can ride faster than most of the touring cyclists I know, so when you get used to it you can easily pace alongside touring cyclists. Some guys I know can even beat the average guy on a racing bike in a sportive - especially on hilly courses because the ElliptiGO is a great hill climber. This is despite the fact that riding an ElliptiGO probably uses double the effort as riding a bicycle. Because you use more muscles when you ride the ElliptiGO than when you ride a bicycle the effort is quite easy to adapt to and you can soon travel as far as a cyclist, despite working twice as hard. You don't notice it much when you get used to the training, in the same way as a fit runner can run for a long time without feeling tired, even though he/she is working quite hard (from an energy expenditure perspective).

To answer some of the specific questions asked here:

You can attach some types of trailers to the ElliptiGO, which is one way to tour I guess - or you can use backpacks as well. The ElliptiGO is not a great load vehicle, I must say, but it can be used quite easily for commuting. And regarding going End-To-End, someone actually did that this summer - read it on this link (http://www.elliptigo.co.uk/training/epi ... s-britain/)!

Not convinced about keeping up with an equally fit rider at speed, the upright position = more drag. I can keep up with fitter DF riders than me on the flat with my recumbent trikes, all down to better aerodynamics.

"I thought of that while riding my bike." -Albert Einstein, on the Theory of Relativity

Why dont you just walk instead of riding these 'things' ?
Top

Looks great. I want one with SPD footplates.

And how about a folding version?
Have we got time for another cuppa?
Top

I saw George Watkins riding this during the Deloitte RAB this year, and was amazed at how fast he was. I was part of the broom wagon crew and he was well up the field every day.
Power to the pedals
Top

Just discovered there is a new dealer opened up in the same town, Celebration, as I live part time in Florida and will definitely give one a go. Heading there in Jan to cycle in the warm for a month YES

byegad wrote:
Not convinced about keeping up with an equally fit rider at speed, the upright position = more drag. I can keep up with fitter DF riders than me on the flat with my recumbent trikes, all down to better aerodynamics.

Correct, drag is much more of an issue on an ElliptiGO than most other types of bike - that's because it is actually designed to work riders harder. The best way to compare the speed potential is to say the same rider should go faster on a racing bike than he/she would on an ElliptiGO. So those ElliptiGO riders who are faster than conventional cyclists are probably considerably fitter than those cyclists they can outride. But as a vehicle it is certainly not as efficient, aerodynamic, or as light as a bicycle.

Just to complicate that discussion further, a very fit conventional cyclist usually won't be able to ride to his or her potential on an ElliptiGO when still new to it, because it uses more muscles than riding a bicycle - whereas a fit ElliptiGO rider will be able to ride a conventional bicycle very well - even without training on one (because the ElliptiGO does work the muscles used to ride a bicycle, as well as those muscles used for running).

2 Badly thought out name IMO (When I saw the thread title, I thought it was about a medical condition.

)
3 If the OP did not have immaculate credentials, I should have assumed this was spam
Top

seamustuff wrote:Why dont you just walk instead of riding these 'things' ?

We are an eclectic bunch of cyclists.

There are occasions when riding is no longer simply a case of being "easier" or "more convenient". My recumbent trike with a trailer is certainly more efficient than my ancient delivery bike with the massive basket, but there is a certain enjoyment and satisfaction with shopping performed with the latter

Sometimes there are machines you just have to try ... and this is one of them
Top
Post Reply
35 posts