Up for a ride?

DIscuss anything relating to non-standard cycles and their equipment.
Post Reply
281 posts

Four member of the South West and Wales Trike riders Facebook group
https://www.facebook.com/groups/1669047716480391/
are particpating in the Cotswold Cogfest
https://cotswoldcogfest.org/
tomorrow
Anyone else care to join us?
Top

hoarder wrote:OK, Sunday 27th is now in the Diary - I'd go for the St. Ives trip we couldn't do earlier in the year. Seem to remember planning to have lunch up at a Pub in St. Ives, too.

I'll hopefully make it down to this weekends ride - all depends if my knee behaves itself and wants to cooperate.

Thanks to Brian, Daveyboy and Andy for joining the ride - and apologies from me for the difficulty of the off-road section - I (and Google Satellite) had no-idea that 1,000,000 tons p.a. of Hanson's aggregate mining would come between us and our back-on-road destination, resulting in a major U-turn and a repeat battle through pretty difficult terrain. Yes, we could see where we needed to be, maybe 1 km further ahead, but had no idea as to how to cross a newly-constructed quarry.

Two Bachettas, one Hase Trigo and an ICE Adventure - photo of us all below (Daveyboy's in the mirror). I'll try to upload a short video, but most of it is too juddery to use (the mount on the trike wasn't good - some work to do there).

I hope Brian and Daveyboy made good progress back to the misguided busway; Andy and I battled on with cycles carried at head-height over the lock walkways (too narrow by 10cms for an ICE Adventure), and after a half-mile, along an overgrown path (not for the first time that day did my ICE double as a combine harvester) we eventually re-joined the main road. A brief stop at the petrol station shop to refuel, and we were off on a mixture of
newly-tarmacadamed road and cyclepaths, right into St. Ives itself. As Andy pointed out to me, Bridge Street is probably going to be found near the water, so we pretty quickly found the Oliver Cromwell pub for a much-delayed lunch stop.

My Garmin camera battery ran out just as we were leaving St. Ives, so there's no footage of the easy part of the ride - St. Ives to Histon, along the (smooth and fast) busway.

Pre-empting the group's unanimous vote that I never get to choose the route again, I'll offer to spend time baking cake. Any requests ? Rocky Road, perhaps ? 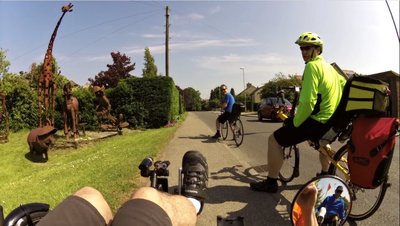 @Hoarder Please do not worry about the navigation. I can not talk as my attempts to help failed when my Garmin refused to powerup due to me not checking and charging before starting! How on earth would we know that the UKs biggest quarry was going to be put slap bang on our route if Google had no idea it was even there.

Hope you did not mind me heading off with Dave. I think he was on low battery and it was probably good someone went with him. As luck would have it we headed back down that track for 5 minutes then we were on a road into Willingham before sinking two very fine pints at the most lovely pub this year. Then a quick stop to visit my hospitable mate Terry who stood us two lovely cold cans of Dr Pepper. Then a quick zipp down the misguided busway. Loads of families out for a ride (why could this be @GCP?) on the busway path.

Please do download a bit of the bouncing video. This must have been a dystopian vision of a future UK - no pubs, no cafes, cracked concrete roads riddled with weeds, and the last of the UKs mineral resources being plundered by multi-national companies. This could be better than the Mad Max series and you should definitely send it to the Cannes Film Festival.

Thanks very much for organising,
Top

@Hoarder, thank you for organising and planning yesterdays route - even if it didn't go exactly to plan I think a good time was had most of the time! It was a good proving ground for offroad abilities and I'm no longer worried about the worst that the Marriotts way can throw at me.

Brian, good call heading back with Dave - sounds like you had an easier route than we did on the way back. I thought recumbents were supposed to be easier on the shoulders than normal bikes but after the ride I feel like I've been doing a fair bit of lifting for some reason.

I think we need to start a campaign for the introduction of more appropriate signage for such routes, with this in mind I propose the below 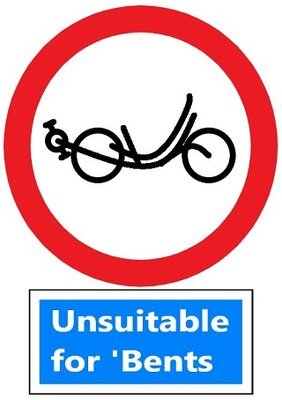 On a slightly more sensible note - thank you all for being so friendly and welcoming - I look forward tot he next ride - although maybe we can stay away from the tank testing grounds next time?
Last edited by Wonderbadger on 3 Jun 2018, 7:24pm, edited 1 time in total.
Top

Sorry, I couldn't make it guys. I really don't like missing rides. I'm quite interested in doing our Thetford Forest ride in the next couple of weeks, anyone up for it? Starting throwing out some dates and we'll see what we can all agree on.
Only dead men have seen the end of wars

I'll be free for the next couple of weekends if that suits anyone - then the weekend of the 16th & 17th I'm likely to be busy.
Top

Whats everyone look like for the 10th?
Only dead men have seen the end of wars

The 10th is a go. I'll get the details sorted before the end of the day.
Only dead men have seen the end of wars

As promised, details for a ride on the 10th of June. We're riding thru Thetford forest again, I've only been waiting to do this again for near on 2 years.
I know hoarder is in and Dave said he's a maybe. I haven't spoken to Atlasshrugged but Wonderbadger said he's free as well so there will be at least 3 to 5 of us not including randoms. I'm going to set our meet time for 0800 and pushing off for 0830 for any stragglers. Angel's Cafe opens a 0800 so those of us who'd like a hot drink of some food before setting off can get their fix. This ride is a 50 miler give or take a few miles guys, so be prepared for a nice long ride. We'll be stopping midway at Elveden Inn for a pint at least and maybe some food depending on the timing. Packing a lunch or something to keep you going isn't a terrible idea.

As always we welcome all riders and don't let the distance put you off we only go as fast as our slowest rider. More than one of us knows the area so splitting up the group is no problem. Feel free to contact me with any questions.


Will
Only dead men have seen the end of wars

Just checking to see who's interested in doing this ride. I'm happy to do the short, or medium routes.

Weather's looking good for this Sunday. I'll see you guys soon!
Only dead men have seen the end of wars

Off to Thetford Forest again after two years, it was well worth the wait. It was just Jon and I setting off but thanks to two unplanned stops we were soon joined by Andy. The weather was as good as it gets, the company was superb as always, and roads gave as much as they took. I think I'd like to do that ride most days if I could.

Only dead men have seen the end of wars

Cheers to Will and Andy. This time last week we were at the Eleveden Inn with a couple of cold beers. The fact that Andy caught up with us after getting delayed before the start is a reminder to always post the route before the event (note to self). But as my route planning normally strays into the off-road and the uphill challenges, I did manage to hoodwink WIll into taking the sandy route across Cavenham Heath. My payback - rear derailleur lower cage and chaintube entrance frequently submerged in soft sand - it took several hours that evening to remove, clean and replace the whole drivetrain. Look forward to the next one.
Top

Anyone wanting to join us please drop me a line.