DIscuss anything relating to non-standard cycles and their equipment.
Post Reply
56 posts

is it purely coincidence that it was finished just after last orders and the test ride heralded lots of wobbling and weaving?

how many links are the chains? they look huge!
Top

Have you named it yet?
Cycling UK Life Member
PBP Ancien (2007)
Top

Brucey wrote:Where the diamond frame is an example of fairly convergent evolution for upright bikes, when you look at recumbent machines, there is little similar convergence, and things change enormously with relatively small changes in intended application or designer's whim.

Here's a thought. Just my own thought.

In late Victorian times, the "discovery" of the bicycle chain (and drive) allowed the huge, and immediate, transition away from the Ordinary bicycle. It's often depicted as a move to the Safety bicycle, in the diamond frame configuration that we all know and (some of us) love. But, historically this wasn't quite the case. The Victorians came up with just about every configuration that you could imagine - two wheel, three wheels, two riders, three riders, one rider and two passengers, side-by-side, semi-recumbent tandems, triples, four wheelers, sun canopies. And some of our current engineering concepts were actually engineered then, albeit with poorer materials and technology.

The "Safety" emerged triumphant for a number of reasons - it was easy to master; a whole range of shapes and sizes could ride it; it offered everyday practicality in a number of guises; it was simple in design; and (crucially) the simplicity allowed it to be mass produced relatively cheaply. At a time when working people had no independent transport, this was a godsend, which opened up new avenues for work and leisure. It went down a bomb....and relegated all other possible developments to the shed out back, to rust away and be forgotten. (metaphorically speaking, of course).

In the past 30 years, or so, there's been a re-emergence of ideas that were thought of as lost. For example, a wide variety of cargo bike configurations can been seen, especially in Northern Europe (I can't speak for USA). Electric bikes are simply a reworking of the concept of sticking a small engine in a bicycle frame, which was the way in which the motorcycle industry was born. And, of course, there's been the revitalising (and move into series production) of recumbents.

To my mind this period of rediscovery of cycling configurations is not confined to the recumbent and all the excitement, innovation and effervescence in that scene. I believe it's a return to that Victorian period in which people with ideas put their necks on the line and manufactured their creations. They hoped to make a profit (of course), but found that it was only the D/f that would do so. But, what we have today is a market place where more people have more disposable income. So, there are niches for smaller production runs (of recumbents; cargo bikes; handcycles; trikes; semi-recumbent tandems; etc) in which people will pay more, because they can afford it.

I agree with Brucey, the D/f thinking has converged, and recumbent thinking is (at present) multi-faceted. But, I would go further and say that all non D/f cycling is currently broadening its spectrum. Personally, I find this most delightful and stimulating, even if I do sometimes go into a museum to find a Victorian exhibit that is currently on the market as "new thinking".
Top

mig wrote:is it purely coincidence that it was finished just after last orders and the test ride heralded lots of wobbling and weaving?

how many links are the chains? they look huge!

I was somewhat incapacitated, but it was tiredness (following a prolonged weldathon/spannerthon) rather than anything else; it would all have been more understandable if I'd had a couple of pints of beer.

The chains are each about 1-1/2 ordinary bike chains; I'm hoping that it will be a 'buy three of each, get two full sets' kind of a deal but I have not checked. If it is, then it'll be about £20 per full set of chain.

The front is a cheap bushingless 1/8" chain, and the rear is a 9s chain of as yet unknown (to me) quality. It is branded Sun Race, but I don't think that Sun Race actually make chains, so it is either a Taya or a KMC perhaps. It came with a shimano/campag style joining pin, but weirdly, the nose of the pin (the guide part) was screwed on, so no snapping required. I reckon the rear chain will wear out first, because it is certainly getting dirty about x10 as fast.

Spinners wrote:Have you named it yet?

I have not named the thing yet, but it is was built as a 'mule', and it is almost as ugly as one, so that is its working title, I guess....

I also have had strong thoughts of building something but am leaning to three wheels.................
NA Thinks Just End 2 End Return + Bivvy
You'll Still Find Me At The Top Of A Hill
Please forgive the poor Grammar I blame it on my mobile and phat thinkers.
Top

[XAP]Bob wrote:The act of learning to ride all over again....
Just don't do what Destin did:

I recall being told (many years ago) of an experiment at Morgan Cars involving reversing the steering wheel action. Peter Morgan learnt to drive it, without too much(?) trouble, but then got back into a standard car and drove it into the nearest wall

Reminds me of when I first tried out a recumbent trike and learnt very quickly that a) you don't counter-steer a trike, & b) tadpole trikes have very good brakes

Back to Brucey's bike, I initially thought that maybe there was an unnecessary amount of weight on the front wheel, given the pedal clearance, but maybe not? 10/10 for effort and execution (seat excepting!). Let us know how you get on with your mate's Bacchetta (if he lets you near it!).
"42"
Top

Crikey - not heard of people trying to countersteer a 'bent trike before - upright, yes - but everyone I've seen on a 'bent treats it as a completely new action.
A shortcut has to be a challenge, otherwise it would just be the way. No situation is so dire that panic cannot make it worse.
There are two kinds of people in this world: those can extrapolate from incomplete data.
Top

The stall operator made it look flawless. 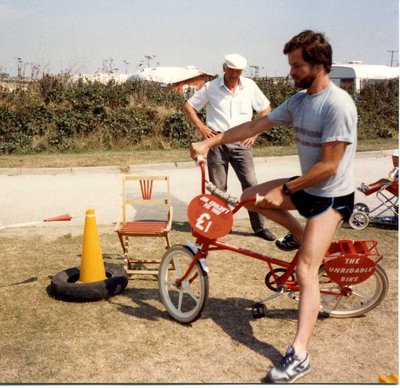 In the event of an emergency stop on a bike that high you are going to be going over the front wheel fairly quickly. Is the plan to just uncleat and hit the ground running?
Top

Not sure he'd go over much faster than a typical upwrong rider, and as you say, he'd be in a far better position to deal with the situation than the headfirst posture of the (un)safety bicycle...
A shortcut has to be a challenge, otherwise it would just be the way. No situation is so dire that panic cannot make it worse.
There are two kinds of people in this world: those can extrapolate from incomplete data.
Top

squeaker wrote: Back to Brucey's bike, I initially thought that maybe there was an unnecessary amount of weight on the front wheel, given the pedal clearance, but maybe not? 10/10 for effort and execution (seat excepting!).

I'm not sure exactly what the weight distribution is, tbh, although I do think it is a bit front heavy. Ultimately it is set by the boom length and the length of rider's legs, with the snag that I could predict with a few mm what my saddle height would be on an upright, but not on this....

So I built it a little long/forward with the idea that I'd shorten it if necessary. I think I have a little more weight on the front wheel than the rear as it is, but I could change that if I wanted to. However I'm not sure it is so bad as it is, even though the steering feels a bit weird to me; if I sit upright, unclipped, this leaves my c.o.g. in roughly the same place but the steering is completely different, and more what I am used to. So I think the 'toppling' moment of inertia strongly affects steering feel, as does one's ability to shift body weight when steering normally.

[If I do move the riding position back at all, I'll either increase the tiller action to the steering or have to revise the steering geometry to include a slacker head angle].

When carrying luggage, it is going on the back without question, and just 5kg or so over the rear wheel is probably enough to equalise the weight distribution.

In a similar vein I used a steering geometry that I would happily ride on a normal bike, so that I could gauge the effect of the way the weight is distributed on the steering feel; had I changed many things at the same time (as I see it) the results would have been very confusing to me.

I initially tried a lightweight 28-spoke rear wheel I had kicking around, but I soon ditched that; it was just too flexy. The rear wheel I have fitted presently is a 36 spoke one and it steers a good deal better with that fitted.

Rationalising the way the machine feels when steered; if you put a steering input into the bars, one immediate effect is that the headstock (and therefore the weight of the rider) is displaced sideways. On an upright, I think that most riders hinge slightly at the waist, so only a fraction of the rider's weight is actually transferred, and the motion is damped. WIth a heavily loaded bike or one where the rider weight can't move or hinge in the same way (i.e. recumbent), the weight is transferred directly and/or the centring force in the steering is high. Overall I think this can generate higher than normal lateral forces in the wheels and perhaps also twisting forces in a recumbent bike frame.

So reducing the dead weight over the front wheel and/or reducing the trail value can reduce this effect, and these are the only things you can do on a recumbent machine. I may yet try these things; as it is, I wouldn't discount the possibility that the machine I have built won't shimmy in an unpleasant way. It hasn't done this yet but it may yet rear its ugly head at some speed/gradient condition I have not yet encountered.

:
perhaps such recumbents could be even more pedestrian-friendlier by placing a "bumper" in front of the pedal arc to avoid any pedal clobbering at any contact

2) I like the higher rider idea as I would always want to have my eyes no lower than a car drivers .
(Some recumbents look like riders eyes are below / level with headlamps: ie dipped headlamps == main beam from their POV

3) I noticed some recumbent trikes are being offered with higher seats now, although the reason given is to suit stiffer-limbed persons by allowing easier mounting/boarding. http://www.hpvelotechnik.com/produkte/scorpion_plus20/index_e.html. I think/hope the seat can go higher than the photo. I would have thought raising the seat would open up a large low luggage space which could compensate for the higher riders weight.
------------You may not use this post in Cycle or other magazine ------