Reporting from Telford, crime capital of leafy Shropshire.
I had my GT zaskar stolen from my garden shed at 3am, 031212. Thieves unscrewed the hinges, opened the door, alarm went off and they grabbed my bike and were gone. I phoned the police and they sent two policemen straight away in the hope they could spot someone on their way, they also stopped off at a local known felons' house but no activity there. The police had a look around the garden, took some details from me and gave me a crime number.
Two days later I took my dog for a walk into the local estate (read dodgy) and found my Ortlieb handlebar bag ( £65 from Wiggle.co.uk) which they had ditched by the side of the path leading into the estate, so I have a good idea that the bike is on the estate somewhere. I bought the bike about 12 years ago for £600 and have since turned it into a touring bike with top end components totalling £800+. Here is a list........B17 honey coloured saddle with copper rivets.
Blue Use seatpost.
Red Hope hubs with Mavic hoops, (X317 I think).
Blue Hope skewers.
Blue riser bars with clip for Ortlieb bag.
Black adjustable stem.
XT v brakes and levers.
XT shifters and mechs front and back, the new sort, 27 speed.
FSA headset.
Shimano UN bottom bracket with the square ends.
Shimano red DX spd pedals.
Marzochi Bomber forks (black).
Scwalbe Marathon plus tyres.
Ergon GC2 handlebar grips.
Blue cranks with mix of cogs.


The forks have 110 or 120mm of travel so are not correct for the frame but it rides true and I've never come off this bike, I did the Canal du Midi in 2009 from Sete to Bordeaux and The Pyrennees in 2010 from Perpignan to Bayonne to Bordeaux including all the classic cols, camping en route both times, so I have some good memories with this bike. Before putting it away in the shed I replaced all the gear and brake wires and brake pads, lubed the headset, polished and cleaned and removed the panniers all in preperation for a 4 month adventure in Spain next year.

The insurance co want receipts for all the parts I've bought. 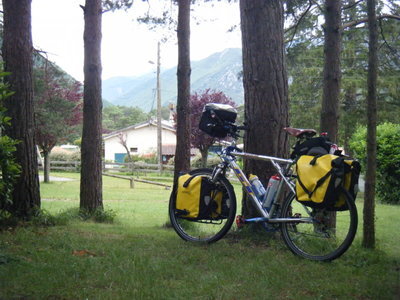 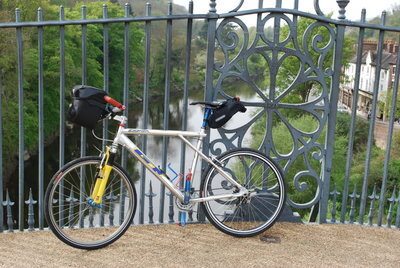 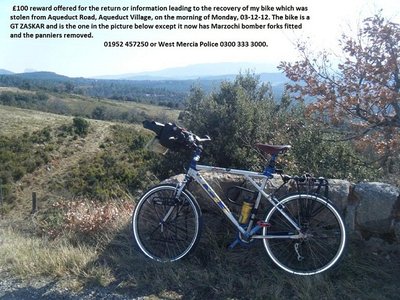 do you know anyone who lives on that estate? is there another path leading off onto another road or is a culdesac? the only thing i can think of is keep on going through the estate in case someone tries to shift it out fast. problem with that is if it's moved into a van, it takes about 5 seconds to load and away

if it hasn't been moved on, it's a case of being there 24/7 which is going to be frustrating and time consuming and being at the right time at the right place.
I had a quick look at deepdale and dale acre out of random.

try and get your local paper to insert an appeal. (if any of the scotes can read)

if there is a newsagent or shop on the estate or near, put up a bike wanted advert and see if anything crops up. or print the bike photo and put that up instead. i'd go for the bike wanted first, try and flush them out. and phone all the used bikes in your area. telford is a big place

so, how come it was you who found the bag? it shows police aren't patrolling as much, not on foot at least
Top

Hi John, Yes I've posted up some flyers on the estate offering a reward for the return of the bike. I presume they will hold tight for a while and then try to move it on Gumtree, Ebay, Facebook sales, Cash coverters, etc either as a complete bike or break it up for parts that is assuming of course that the scumbags have a sufficient grasp of the English language to compose an advertisement but then it's all abbreviated phone text nowadays so even the illiterate can communicate to a certain extent.

It's a big estate, built in the 60s and is like a rabbit warren and conducive to crime and criminality, there's a project to spend millions of pounds on it to make it less amenable to criminality

Yes I know we've heard it before.

People must have walked past the Ortlieb bag and just ignored it or not seen it, amazing but then I don't know the percentage of the population that have knowledge of high end German bags, probably not high on a Black country overspill estate like Brookside, though of course I could be wrong.........................

No I don't know anyone who lives on the estate.
Top

i'm doing that as well, there are a lot of buy&sell pages on facebook, same area, different pages. half of them jam up when scrolling down so if you are going to do that, write down what time you logged off, make a note of what the last advert was and when you log back on, scroll down to the bit you left.

that sounds like european grant hoping the estate will get a bit better and improve people's lives and make it look good on paper for the council. I know the feeling, a warren. All it takes is one or two on an estate and drag it down as usually the majority are ok.

Could the throwing of the bag be a red herring? it could be easy to discard it there to get you or the police to assume it was someone on the estate. Probably it could be a mark of the thief making a statement he is on the estate, doesn't give two hoots but they can't find me.
Top

try this as well