This sub-forum all discussions about this "lively" subject. All topics that are substantially about helmets will be moved here, if not placed here correctly in the first place.
Post Reply
65 posts

Psamathe wrote:
If somebody genuinely believes something can make the lives of others safer then I see nothing wrong with them passing on their experiences and their personal recommendations. It's when "compulsion" starts to get mentioned that I get more concerned.

Even without compulsion being suggested the advice can get very pressing, and even unpleasant. I imagine we can all recall some advocates questioning the sanity or intelligence of those to whom they are trying to spread the gospel.
"If you don't wear a helmet you probably don't have much to protect."
"I call cyclists without helmets organ donors."
It should not take long for a helmet enthusiast to realise not everyone wants to hear more "advice", and become less evangelical. Some though are very persistent.

I see Peter Clinch is saying much the same.
Top

Psamathe wrote:I don't actually see a problem with the views expressed by the injured cyclist in the original post.

But at least I was alive. Had I not been wearing my helmet, I would have been killed for sure. My helmet saved my life; there is no question about that.

Guff like that, however well meaning, is a small step towards helmet laws. And it misses the bigger picture about avoiding accidents in the first place. A great blog post mentioned here before starts with a similar statement then shows with analysis of helmet cam footage that the crash was totally avoidable.

“Any cyclist who goes out without a helmet telling his wife and children he loves them is lying.”

pjclinch pointed out some activities for which helmets inprove safety. Even though he has done so before, I forgot about them

I will accept those for 'common sense'

My point was not the specific instrument, but that you cannot necessarily correlate resistance to mechanical damage with improved safety.

You can however correlate resistance to mechanical damage (of the head) to the effectiveness of a helmet.

You are correct that this doesn't carry over to motorcycling. And I have no doubt that in a crash, a motorcyclist wearing a helmet is better protected than one that isn't. However, almost all of the evidence that I have seen that demonstrate effectiveness of motorcycle helmets are hospital studies. They only look at helmetted and unhelmetted motocyclists after a crash. Some others look at fatality rates before and after the introduction of helmet laws. Or they compare fatality rates between US states that have and do not have helmet laws.

John Adams doesn't appear to have updated this since 1983, but he didn't find any difference in before and after motorcycle helmet laws. http://john-adams.co.uk/wp-content/uplo ... elmets.pdf

The US CDC, NHTSA, and many other bodies claim that helmet laws saves lives and money. However, it seems most of the savings come from people who do not ride motorcycles when they are required to wear a helmet. I guess that could be taken to be a good thing.
“In some ways, it is easier to be a dissident, for then one is without responsibility.”
― Nelson Mandela, Long Walk to Freedom
Top

Agree, helmet bit is a red herring. He should have focused on not riding hell for leather, anticipating hazards, choosing an appropriate bike and route for the conditions. Appears he did none of the above. Prevention is better than protection.
Top

sapperadam wrote:You're right. We can't KNOW what the outcome would be, but we can take an educated guess. He was concussed WITH the helmet on, you can bet that concussion would in all likelihood have been a whole lot worse without it.

That's not what an educated guess would tell you and his experience is quite common. An educated guess would tell you that instead of compressing and absorbing energy as it's supposed to do, the helmet as so many do, cracked under brittle fracture which absorbs almost no energy from the impact. It's a common misunderstanding to think that a cracked helmet is evidence that it has worked really well but the reality is its a sign it has failed very badly.

The second thing that an educated guess would tell you is he is not unique in his accident. Lots of other cyclists will have had similar accidents. Some of those will have been wearing helmets and no doubt swearing it saved their live but twice as many on current helmet wearing rates will not have been wearing one so presumably died. However the number of dead cyclists in a year is very small and the number that died from head injuries alone very much smaller. So the lack of lots of dead cyclists really points to the fact that the helmeted ones would probably have survived equally well with or without a helmet despite their convictions otherwise.

What common sense would tell him is he should wear one of these next time he goes out cycling
http://www.chainreactioncycles.com/dain ... prod118472
Top

I hope sapperadam will come back, read and consider the views above fairly.

I've little to add, so I'll just post a picture of an anti-concussion helmet. It is very unlikely that the crasher was wearing one of these and a standard helmet prioritises impact protection over anti-concussion, so I'm very sceptical of the claim his helmet worked (not saying it didn't - just that we can't tell and nor can the crasher) and suggest it's better to look at population-level statistics and advocate more cycling which means not promoting crash helmets. 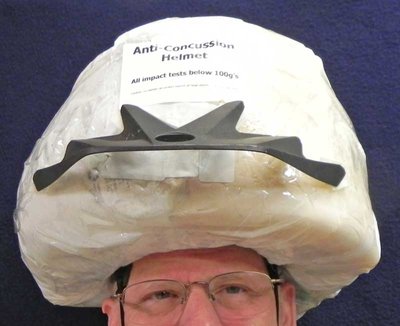 mjr wrote:I hope sapperadam will come back, read and consider the views above fairly.

I've little to add, so I'll just post a picture of an anti-concussion helmet. It is very unlikely that the crasher was wearing one of these and a standard helmet prioritises impact protection over anti-concussion, so I'm very sceptical of the claim his helmet worked (not saying it didn't - just that we can't tell and nor can the crasher) and suggest it's better to look at population-level statistics and advocate more cycling which means not promoting crash helmets.

Sorry but I'd never be seen dead in that. Do you do it in a different colour?

On the contrary, if we ever end up with compulsion I'm well going to buy a helmet like that!
Top

That tweet's since been deleted, but whoever's at the wheel of that Twitter account is still merrily sticking their fingers in their ears and refusing to consider arguments that involve actual evidence rather than the sort of assumption and blinkered extrapolation that is euphemistically and defensively branded "common sense".

Some more on the "I'm not dead because…" phenomenon:

Bez wrote:The sort of basic logical failure in the OP's quoted text does really need to be addressed because it leads to stuff like [police twitter being stupid]

How best to address it? Has it been done without helmet fans repeatedly asserting common sense and turning it into an emotional flamewar?
MJR, mostly pedalling 3-speed roadsters. KL+West Norfolk BUG incl social easy rides http://www.klwnbug.co.uk
All the above is CC-By-SA and no other implied copyright license to Cycle magazine.
Top

Psamathe wrote:The case for compulsion seems to be "it's just obvious" which is not really a strong case.

There's your mistake right there!

It is a strong case. It's an easy concept to grab, an easy soundbite to make and one that makes sense to everyone requiring no explanation (unlike disproving helmet safety that requires explanations, statistics and science).
It's an uphill battle and ultimately whilst trying to explain it to a vacant eyed member of Joe Public they'll be thinking: "I'd rather be wearing a helmet if someone hits me with a stick than not".
And that's before they roll out the anecdotes...
Top

I've got some great Lion repellent....
A shortcut has to be a challenge, otherwise it would just be the way. No situation is so dire that panic cannot make it worse.
There are two kinds of people in this world: those can extrapolate from incomplete data.
Top

Psamathe wrote:Seems to me that first people need to demonstrate a significant safety improvement before arguing for compulsion. And seems to me that despite many attempts there is still not real evidence.

I know that, and you know that, but to Joseph and Jane Q. Public, "I cracked my helmet and that would have been a fractured skull without it!" really is real evidence, especially if it comes from someone they know or a trusted figure (and if you've got a well-meaning paediatric nurse banging the drum to "save children's lives" that's the sort of thing that passes for "trusted figure").

Psamathe wrote:And to start arguing for legislative changes (or spending public money on safety campaigns) before there is any demonstrable effect it just madness. The case for compulsion seems to be "it's just obvious" which is not really a strong case.

I know that, and you know that, but to the Rt. Hon. William T Backbencher who has no science background and believes pretty much the same thing as his constituents Mr. & Mrs. Public and has just been drawn for a private member's bill, the case made by the paediatric nurse who's just lobbied him with this Great Idea to do what those sensible folk down-under have done about helmets to save children's lives looks like a winner.

We have to keep on (and on, and on) with the evidence (or lack thereof), but you can never underestimate the power of human stupidity and assume just because it's obvious to you it'll be clear to folk up to and including Westminster politicians. It's worth looking at Boardman's comments on the Transport Select Committee a couple of years back: http://www.bbc.co.uk/news/uk-politics-25200562 to see the sort of depths we're plumbing.

A good pair of Nike trainers?