This sub-forum all discussions about this "lively" subject. All topics that are substantially about helmets will be moved here, if not placed here correctly in the first place.
Post Reply
120 posts

John-D wrote:Have the HSE 'decreed' that? I think they simply say that like motorcycle helmets they are not covered by the PPE Regulations.

They have made a particular note to mention that cycle helmets are not covered by the regulations whilst used on the road. That is fairly damning in my honest opinion.

Not really. The HSE view is based on the 1992 Regulations, which state:

Helmets
The regulations do not cover the use of protective equipment such as cycle helmets or crash helmets worn by employees on the roads. Motorcycle crash helmets are legally required for motorcyclists under road traffic legislation - - -

Well, not under Health and Safety at Work legislation but I don't think that has the significance you place upon it. Not really 'fairly damning', in fact fairly irrelevant. If, god forbid, helmets ever became mandatory under road traffic legislation the HSE would simply change their guidance.
John
Lejog and back to Yorkshire with a tent
A wide C2C (from home)
Top

Mostly agree on that point, we can't interpret the HSE's statement as a criticism of cycle helmets.

If, god forbid, helmets ever became mandatory under road traffic legislation the HSE would simply change their guidance.

As you said earlier, motorcycle helmets aren't PPE within the meaning of the Act despite being mandatory under the road traffic legislation, so the HSE's position probably wouldn't change
Top

Re: Cyclist killed in three-rider collision in Lancashire

..... not every fall off a bike leads to catastrophic brain damage or death.

Unless you are Headway, BHIT or other pro-helmet organisation which heavily implies this is the case.

Then when you looked at their figures, not only had they included adults, but assumed all cycle injuries were head injuries.

The outcome was that in order to achieve the claimed benefits, more accidents involving head injuries would be occurring than before the helmet law was introduced.

IN other words BHIT actually proved that helmets would not only be less safe, but would cause an increase in head inuries
Top

Back in 2002 the HSE made it absolutely clear that helmets are NOT PPE, and that the HSE would not support an employer who tried this.

Re: Cyclist killed in three-rider collision in Lancashire

Cunobelin wrote:The outcome was that in order to achieve the claimed benefits, more accidents involving head injuries would be occurring than before the helmet law was introduced.

IN other words BHIT actually proved that helmets would not only be less safe, but would cause an increase in head inuries

Their claims were daft, but they didn't prove anything.
Top

Tonyf33 wrote:The above has been mentioned with regard to logical steps/correct procedure etc elsewhere.

A couple of things though:

"The main hazards are being struck by a car/motor vehicle and falling off", I'd say you are confusing hazard with consequence/outcome, no?
In all instances it is critical to understand the difference otherwise in part you'll fail to understand the 'why something happened' and by definition cannot then apply effective preventative methods/procedures.
For a commuter, falling off is generally low likelihood,

Liklihood of "falling off" (the consequence/outcome of not overcoming/avoiding the hazard) for an experienced commuter is not low to medium, in fact in the extremely low occurence range. Think about how often you have fallen off ever...mine is thrice in 32 years (incl an newbie SPD moment)

the 'likelihood' of harm/injury at or above that being considered to prevent (head injury) would be extremely low...mine is ZERO despite being struck twice by motorvehicles
given the data we already have we know that that is the case otherwise we'd have had high tens of thousands of TBI cases and low thousand of deaths solely from head injury pre helmets.

Can you even describe cycle helmets as 'PPE' if the H&SE have already decreed that they aren't?

Not confusion, just trying to summarise....

Hazard (potential source of harm): collision with moving motor vehicle. Risk (probability of the potential to cause harm begin realized)- outcome x likelihood. Outcome- varies from minor scrape to serious injury (most likely NOT to head!). Likelihood- variable depending on the context.

Falling off- yes well that is an outcome but is also a round up of several causes leading to a type of "event that could cause harm" which is a loose description of a hazard. In this case, I have not listed all the causes of falling off (hence the "summarising"). Falling off could be down to several things- dodgy road surface, poor personal balance, badly maintained bike, not being sufficiently skilled a rider for the type of bike...... I don't see "falling off" as caused by of a "collision" though.

I wouldn't describe cycle helmets as PPE for exactly the reason you state. However, I was responding to a poster who brought in the H&S approach and "reasonably practicable." My point was, even if we took that "H&S" approach, even if a helmet was PPE, there would be no justification for mandating cycle helmets- something I think we're in agreement on

Contrary to popular belief, the HSE is very sensible when it comes to risk assessment. Their "myth of the month" was a really good campaign.

The use of PPE in a "uniform" sense is far too prevalent in my view. Just look at the use of orange garb on the railway infrastructure

Mostly agree on that point, we can't interpret the HSE's statement as a criticism of cycle helmets.

If, god forbid, helmets ever became mandatory under road traffic legislation the HSE would simply change their guidance.

As you said earlier, motorcycle helmets aren't PPE within the meaning of the Act despite being mandatory under the road traffic legislation, so the HSE's position probably wouldn't change

The interface of Road Traffic and H&S legislation is important. The way that law is enforced, if more than one piece of legislation covers an activity, then the "most relevant" one takes priority.

For road use, the Road Traffic Act takes priority over HSW Act, which is why the Police are primary investigator of road traffic collisions rather than HSE- even when the vehicles involved are on work-related activity. Only if the police decide not to report under RTA (or other legislation) might the HSE get involved and consider a HSW Act breach.

It is a pity really, as if we used HSW Act more for work-related driving offences, the way the HSWA works in tending to hold the management accountable, we may push better behaviour. If the owner of a transport company structured their systems to create incentives for their drivers to drive unsafely (RLJ'ing, speeding etc), with HSWA they would be more easily held accountable and thus more likely to face consequences. Would be interesting to see how a focused campaign on taking some incentives of bad driving away would impact road traffic collision levels......

In the case of accidental death is the coroners report published on the web?
should they be published?
Top

Correct me if I'm wrong but the article doesn't mention helmets at all?

Can I just add my experiences of Raleigh Chopper? 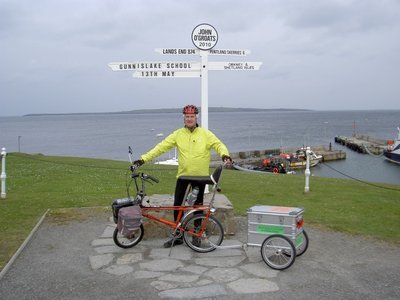 The bike itself was a joy. Heavy - really heavy - but nevertheless a joy to ride.
The saddle was sweaty and I was riding in the heat at circa 65miles a day. My bum was sore for much of the trip.

However, the last few days were perfectly comfortable.

It was stable, sure-footed, surprisingly fast, and a bit of a looker!

I rode the beast for 1,500miles in total, considering I did a lot of practice and training before the JOGLE.
Mick F. Cornwall
Top

Stable and sure footed? The same Chopper that was banned for riders taking the cycling proficiency test because it was so unstable? So unstable one spat me off at a not great speed and broke my leg?

Yep, stable and sure footed.
You needed to fit front panniers with telephone directories and books inside, and decent brakes though.